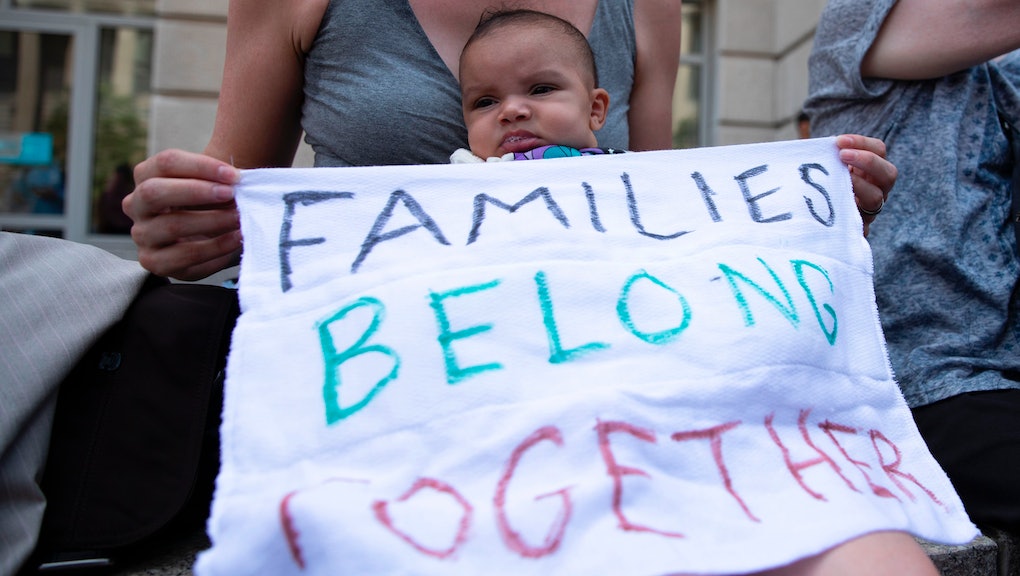 The Trump administration’s policy to separate families at the border is a break from previous administrations’ policies that ultimately makes the U.S. less safe and could lead to children being permanently separated from their parents, according to the former acting director of Immigration and Customs Enforcement.

John Sandweg, who served as acting director of ICE from mid-2013 to early 2014 under then-President Barack Obama, said in an interview on Tuesday that during the Obama administration, immigration officials went “out of our way to keep the family together, to keep the families intact.” By separating families, Sandweg said the Trump administration is giving the Department of Homeland Security the task of keeping track of parents and their children that the agency is “not equipped to do.” This creates a “high likelihood” of parents being permanently separated from their children.

Sandweg added that permanent separation occurs in these situations thanks to different priorities for quickly adjudicating the cases of adults who illegally cross the border, as opposed to a slower process to handle cases for the children they come in with. A parent or guardian could be deported “in a matter of days,” while children, who are viewed as a lower priority and who are offered more protections, could wait years for their cases to be processed. That creates a “high likelihood” of permanent separations, he said.

“Unfortunately, when the parent has been sent back to Honduras, doesn’t speak English and has no money, their ability to navigate the system is limited,” Sandweg said. “They’re entirely dependent on the government to track the location of the child and the location of the parent. There’s no agency equipped to do that.”

The Trump administration’s policy — which a number of administration officials have admitted is an attempt to deter future border crossings — is possibly an “inappropriate use of detention authority,” Sandweg said.

“There are laws in place and longstanding court cases that basically suggest that immigration detention is not to be used as a deterrent,” he added.

Sandweg said he views the policy as an inappropriate use of resource allocations. “Border Patrol agents who are serving as daycare workers when they’re not out in the field arresting bad guys — it’s just silly policy,” Sandweg said.

The policy to separate families could actually have the opposite of a deterring effect, because the undocumented immigrants currently being processed are not running across the border and trying to evade capture, but instead surrendering themselves to Border Patrol agents. Sandweg said that this policy of separating families could lead immigrants to instead run across the border to evade capture — straining resources and potentially allowing criminals to sneak into the U.S.

“You can be tough at the border and not rip screaming, crying children from their parents’ arms,” Sandweg said. “I don’t view this as a toughness issue. We have better border security than ever before, and systems in place to handle this in a humane way.”

Peter Boogaard, who handled immigration and border security issues as a spokesman in the Obama administration, said there are a number of other solutions to fix what he called a “man-made disaster and a crisis” that he said is “entirely created” by Trump’s Department of Justice.

Those possible solutions include allowing migrants to apply for asylum when they are in their home countries, or providing alternatives to detention to track undocumented immigrants, including using ankle bracelets.

“There is no law that states all individuals need to be jailed for the entirety of their proceeding,” Boogaard said in an interview.

Sandweg said he believes a good solution would be to add more immigration judges, who can hear cases for those border crossers quicker, and not to keep all of those who surrender at the border in detention facilities.

“Ultimately, we have to have a real border, not judges,” Trump said Tuesday during a rambling speech before the National Federation of International Business. “Thousands and thousands of judges they want to hire. Who are these people? When we vet a single federal judge it goes through a big process. Anybody that’s ever met her or him, they come, they complain, they don’t complain, they say he’s brilliant, she’s brilliant, he’s not smart enough to be a judge. Now we’re hiring thousands and thousands, what country does this?”

Sandweg, however, sees this as an issue that could be solved quickly.

“This is a docket management problem,” Sandweg said. “We don’t need to detain everybody to secure our borders — that’s the false narrative that Trump is putting forward.”