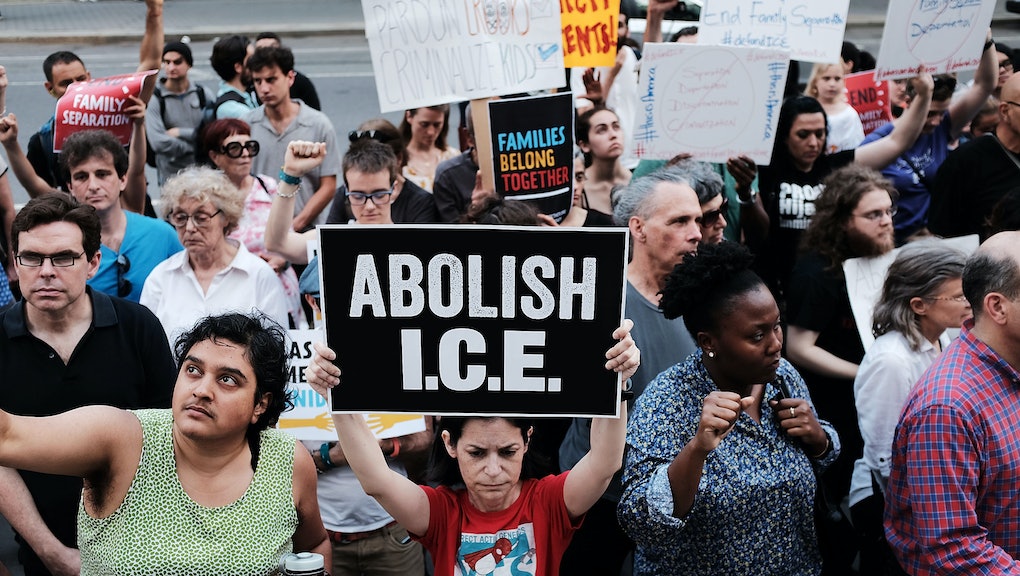 As Americans look toward the immigration and family separation crisis at the United States’ southern border, a nascent movement to abolish the nation’s second-largest criminal investigation agency is catching fire.

Outrage continues to mount over the Trump administration’s policy of separating immigrant families at the U.S.-Mexico border, with a number of prominent U.S. politicians, human rights leaders and three former first ladies denouncing actions at the border this week. As this is all unfolding, more Americans have started to discuss a campaign to abolish Immigration and Customs Enforcement, or ICE, the federal law enforcement agency tasked with carrying out apprehension and deportation policy across the country.

ICE was formed in 2003, after the passing of the Homeland Security Act of 2002 in the wake of the September 11 attacks on the Pentagon and World Trade Center, when the Bush administration reorganized the federal security bureaucracy and created the Department of Homeland Security. The agency operates “more than 400 federal statutes, focusing on preventing terrorism, immigration enforcement and combating transnational crime,” according to its website.

The growing movement for the U.S. to do away with the agency, known as “Abolish ICE,” was actually gaining steam long before the Trump campaign announced its “zero tolerance” family separation policy on April 6, In recent weeks, the term has begun to appear more on social media.

An analysis by the progressive data collective Data for Progress provided exclusively to Mic shows that social media posts on platforms like Twitter containing the phrase “Abolish ICE” have spiked during the past month, as the Trump administration’s new policies have begun to cause controversy.

The spike can likely be attributed to major immigrant rights groups taking action on this issue.

Earlier this month the group Mijente launched a national tour targeting ICE detention centers and calling for the abolition of ICE.

Other immigrant groups like United We Dream and Make the Road have also begun to use the hashtag #AbolishICE in social media posts. Meanwhile, activists with groups like Indivisible and Democratic Socialists of America have begun organizing under the banner — sometimes literally — of “Abolish ICE” as they protest the Trump administration’s policies.

But it’s not just activists leading this charge. So far in 2018, at least 21 Democratic congressional primary candidates have come out in favor of abolishing the agency. On June 5, Democratic candidate Deb Halaand became the first Democrat to win her primary while voicing support for abolishing ICE. Halaand’s district is considered safe Democratic territory, making it highly likely that at least one member of the next Congress will support completely doing away with the U.S. government’s deportation force.

“The role of Immigration and Customs Enforcement should never include killing people, ripping children from their parents’ arms or sexual assault,” Haaland told Newsweek earlier in June. “Until we can stop this violence and dehumanization, we must stop ICE.”

Alexandria Ocasio-Cortez, a candidate mounting a primary challenge against longtime New York Democratic Rep. Joe Crowley, has been particularly vocal in her support for the campaign, frequently reiterating calls to abolish ICE in interviews and social media posts.

“Abolish ICE is not just a slogan,” Sean McElwee, a co-founder of Data for Progress and a vocal proponent of the Abolish ICE movement, said in an interview. McElwee penned an op-ed for the Nation in March arguing for the agency’s abolition. “It is a movement that has already changed American politics forever,” he said. “There will be at least one member of the 116th Congress who supports defunding ICE and I’m certain there will be more.”

Prior to the Bush administration’s reorganization of the federal security bureaucracy, immigration enforcement actions were carried out by the Immigration and Naturalization Service, or INS.

Deportations ballooned under both the Bush and Obama administrations, as both increased enforcement while attempting to broker a deal with hardline conservatives for comprehensive immigration reform. Now, for the first time in the history of the agency, ICE is being overseen by an administration whose No. 1 priority is deporting as many people as possible.

As the movement to abolish ICE grows, the agency could soon find itself facing pressure to radically reform — or risk being scrapped altogether.

“We will not stop fighting until ICE is dismantled, investigated and prosecuted,” McElwee said. “And the United States creates an immigration system based on human flourishing, not white supremacy.”