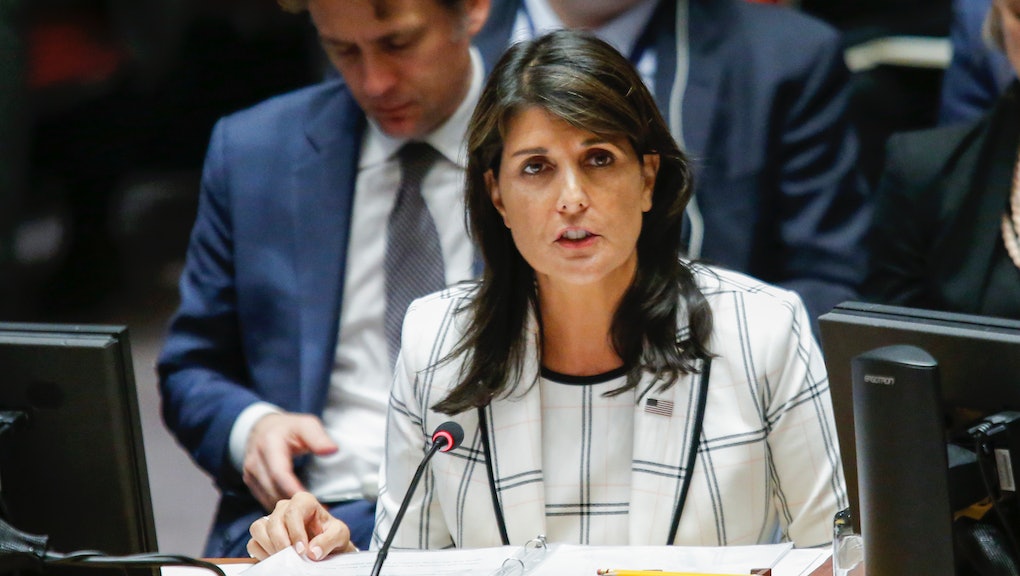 The Trump administration on Tuesday announced it is pulling the United States from the United Nations Human Rights Council, one day after the body’s leader condemned the president’s “zero tolerance” immigration policy that has resulted in the separation of families at the border.

U.S. Ambassador to the United Nations Nikki Haley and Secretary of State Mike Pompeo announced the move Tuesday, calling the UNHRC a “protector of human rights abusers and a cesspool of political bias.”

“This step is not a retreat from human rights commitments,” Haley announced Tuesday. “On the contrary, we take this step because our commitment does not allow us to remain apart of a hypocritical and self-serving organization that makes a mockery of human rights.”

The U.S. had long been believed to be preparing to leave the UNHRC over what administration officials say is unfair treatment of Israel, but the announcement came a day after its chief called the Trump administration’s family separation policy “unconscionable.”

“In the United States, I am deeply concerned by recently adopted policies which punish children for their parents’ actions,” Zeid Ra’ad al-Hussein said at the beginning of the council’s session Monday. “The thought that any state would seek to deter parents by inflicting such abuse on children is unconscionable.”

The so-called “zero tolerance” policy — which Attorney General Jeff Sessions announced in April — has been met with growing outrage in recent days, particularly after ProPublica on Monday released wrenching audio of children crying after being separated from their parents.

President Donald Trump has lied about the origins of the policy, repeatedly claiming that the family separations are the Democrats’ fault — even as he defends the draconian approach as necessary for national security.

The UNHRC was established in 2006 after the disbanding of the U.N. Commission on Human Rights, which had been criticized for inefficiency and for allowing nations with poor human rights records to be members.

The UNHRC, now the U.N.’s main body dedicated to protecting human rights, has since faced similar criticism, including from Pompeo.

“We have no doubt that there was once a noble vision for this council,” Pompeo said Tuesday. “But today, we need to be honest: The Human Rights Council is a poor defender of human rights.”

According to Stephen Miles, director of the progressive national security advocacy group Win Without War, the timing of the withdrawal doesn’t seem to be a coincidence — and it underscores the administration’s apparent indifference toward human rights issues.

“The administration has abandoned America’s leadership on the global stage on human rights,” Miles said in a phone interview. “[The withdrawal] is indicative of this administration’s complete disregard of human rights abuses.”