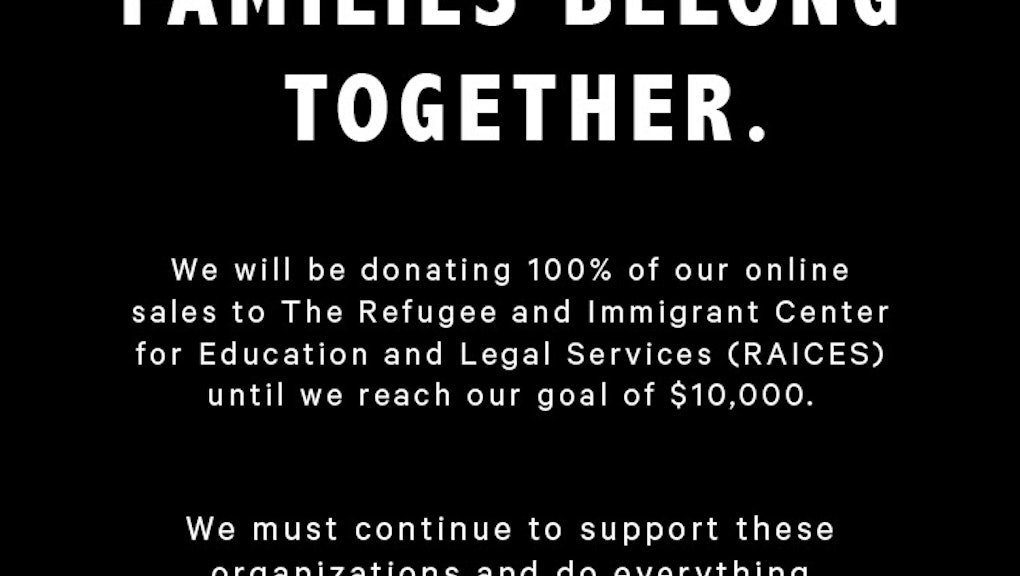 This is our new reality: Every few weeks, a notable few fashion designers and brands are bothered enough by certain Trump administration policies and actions to speak out. In the past year, designers have taken on issues like Trump’s immigration ban, Trump’s shrinking of protected lands and Trump’s own silence on Charlottesville, Virginia.

This week, it was the routine separation of parents and children at the border of Mexico and the United States — with some of the children subsequently being sent to detention facilities — that moved designers to take action.

On Wednesday, both Christian Siriano and Naeem Khan, two designers who have let their own thoughts on the Trumps be known to all, encouraged their more than 1 million combined followers on Instagram to call the U.S. Senate to support Senate Bill 3036, which is known as the Keep Families Together Act.

“This is how you can help the unbelievable things happening in our country,” Siriano wrote on Instagram.

The brand Mara Hoffman then took things one step further. It announced via an email and Instagram post Wednesday that it would donate 100% of its online profits to the Refugee and Immigrant Center for Education and Legal Services until it reached $10,000.

In the past, Hoffman’s fashion week shows have been turned into political rallies of sorts. The organizers of the Women’s March spoke at Hoffman’s New York Fashion Week show in 2017.

By Thursday morning, the brand announced on its website that it had reached its goal, but it isn’t ready to forget the issue.

Trump signed an executive order that would allow families to be detained together at the border, but more than 2,000 children have already been separated from their loved ones, so it’s still important to support organizations like RAICES to make sure everyone is reunited.

It should also be noted that the order does not end the Trump administration’s so-called “zero tolerance” policy, as Mic’s Emily Singer pointed out. All immigrants who illegally cross the border will be detained and prosecuted.

The fight clearly isn’t over yet.

This post will be updated as more brands and designers speak out.