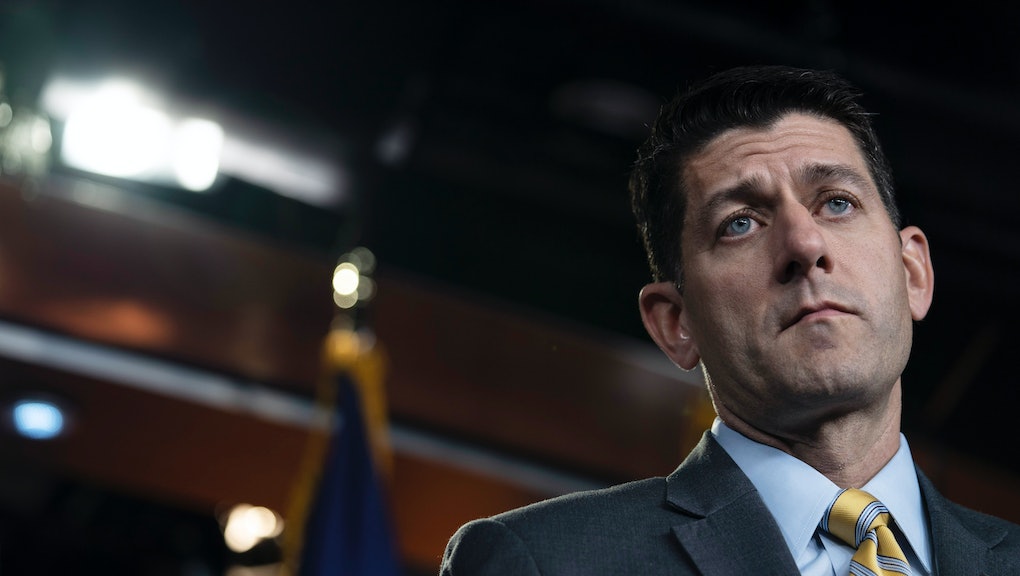 Good morning from Emily Singer at Mic. I’ll be out next week on vacation, so this newsletter will be in the capable hands of my colleague A.P. Joyce.

• Trump will participate in a credentialing ceremony for newly appointed ambassadors at 12:15 p.m. in the Oval Office.

House Republicans did it again on Thursday. A conservative immigration reform bill failed to pass, and GOP lawmakers were forced to postpone a vote on a “compromise” piece of immigration legislation.

Initially, Republicans were scheduled to vote later Thursday afternoon on the “compromise” bill — which provides a pathway to citizenship for undocumented immigrants protected by the Deferred Action for Childhood Arrivals program, but also gave Trump some border wall funding and cuts to legal immigration. But when it became apparent that there was not enough support from within the GOP ranks to pass that bill, Republican leadership delayed the vote until next week. The hope is that the extra time could get more Republicans onboard.

In order to do that, Republicans will add some new provisions to the bill, including a requirement for employers to use a system called E-Verify, which confirms whether they are hiring people legally allowed to work in the U.S.

It’s still unclear whether that bill could pass the House.

Trump certainly isn’t helping, tweeting Friday morning that even if the House passed the bill, it was unlikely to make it through the Senate — giving House Republicans on the fence about voting for the bill an excuse to vote against it.

“Even if we get 100% Republican votes in the Senate, we need 10 Democrat votes to get a much needed Immigration Bill - & the Dems are Obstructionists who won’t give votes for political reasons & because they don’t care about Crime coming from Border! So we need to elect more R’s!” Trump tweeted Friday morning.

Today in Trump’s America: Trump to give speech on immigration

Trump will cap off an emotion-filled week filled with news about families being separated at the border with a speech on immigration reform.

The speech is expected to be dark, as he will make his remarks flanked by what the White House calls “angel families” — or those who have had a family member killed by an undocumented immigrant.

When Trump speaks about immigration, he often cites misleading statistics of crime committed by immigrants, bringing up the MS-13 gang.

But the facts are not on Trump’s side. Undocumented immigrants commit far less crime than native-born Americans, according to the Washington Post, which cited statistics from the Cato Institute.

Nevertheless, the hard-liners within Trump’s base tend to eat up his fear-mongering rhetoric — which the Trump administration thinks will be good for the GOP’s midterm election chances.

Republicans may have failed to pass immigration reform legislation on Thursday, but they did narrowly pass an $860 billion farm bill that creates new work requirements for recipients of food stamps. The bill passed 213-211.

The bill creates stricter eligibility criteria for food stamps, which will lead to roughly 400,000 low-income households losing the benefit, Politico reported, and imposes stricter work requirements on between 5 million to 7 million food stamp recipients. At the same time, the farm bill would dole out subsidies for farmers, and allocate funds for improving broadband access in rural communities and agricultural research.

The bill gives Democrats yet another messaging tool in the midterms, as Republicans made cuts to a service for low-income families, after passing their tax cut bill in December, which gave big tax breaks to corporations and wealthy Americans.

House Republicans passed the bill with the food stamp cuts knowing that the Senate has no plans to make similar cuts — meaning it was a tough vote for some members, for a policy that won’t become law.

Trump celebrated the passage of the bill.

“Farm Bill just passed in the House. So happy to see work requirements included. Big win for the farmers!” Trump tweeted on Thursday.

We don’t understand what she was trying to say, do U?: First lady Melania Trump wore a $39 jacket emblazoned with the words “I really don’t care, do U?” as she made a surprise visit to an immigration detention facility in Texas where children are housed. A spokeswoman for Mrs. Trump said there was “no hidden message” in the first lady’s jacket. President Trump then blew up that argument by claiming his wife was trying to send a message to the media. ”‘I REALLY DON’T CARE, DO U?’ written on the back of Melania’s jacket, refers to the Fake News Media. Melania has learned how dishonest they are, and she truly no longer cares!” Trump tweeted. We may never know what Melania was really trying to say. But what we do know is that the wardrobe choice was odd for someone who knows that every move they make will be scrutinized.

Make room: The Pentagon is preparing to receive as many as 20,000 unaccompanied minors on military bases, where they will be housed as their cases are processed, according to a report in the Washington Post. The Obama administration similarly used military bases to house roughly 7,000 unaccompanied minors in 2014, according to the Washington Post report.