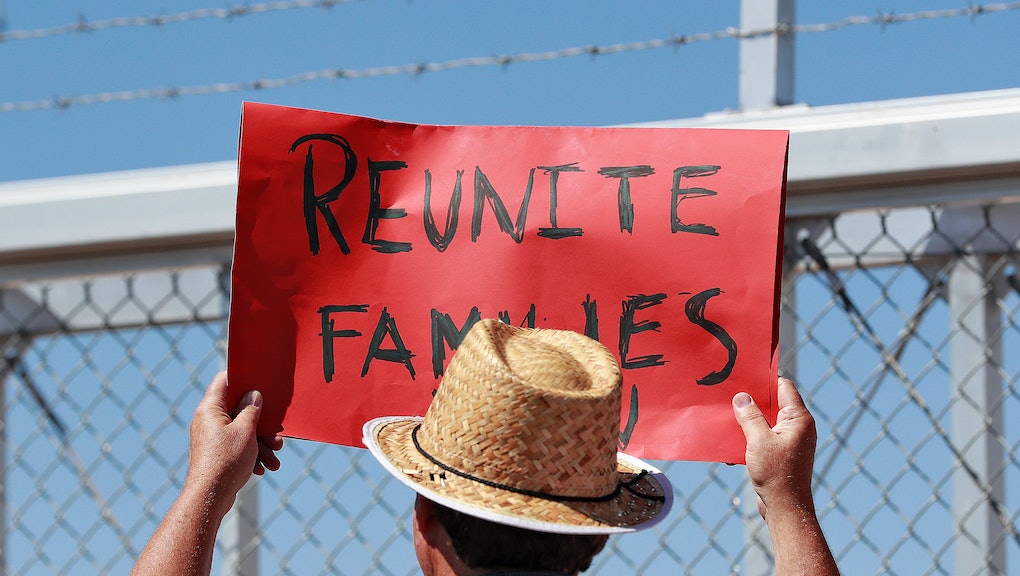 How a $1,500 fundraiser for immigrants ballooned to $20 million, and what will happen with the money

As American citizens hear more stories of children crying and begging as they’re separated from their parents at the southern United States border, see more pictures of the cages in which they are kept and the tin-foil-like blankets in which they are cloaked and watch legislators and governmental agencies haggle over semantics and blanche on a vote, they are increasingly ready to say, “Enough.”

The public has now spoken with their wallets — to the tune of $20 million within eight days. That’s how much money had been raised for the Refugee and Immigrant Center for Education and Legal Services in Texas by June 22. That figure continues to grow by the second, and a clearer picture is emerging on how the money will be used to help those affected by the Trump administration’s zero tolerance policy on immigration. More than 485,000 people have donated and that number continues to rise, with the average donation being about $47, Time reported.

This week, when California couple Charlotte and Dave Willner set out to raise $1,500 for the organization, which pays the bonds and legal fees of parents and children separated at the border, they had no idea the firestorm of action they would spark with their fundraiser.

“Regardless of political party, so many of us are distraught over children being separated from their parents at the border,” Charlotte Willner said in a Wednesday statement. “We can’t all be on the frontlines to help these families, but by supporting RAICES, we’re able to do something that just takes less than a minute, and collectively have an impact.”

For a local nonprofit used to scraping by on what amounts to loose change in the face of the millions pouring in, the influx of donations is a godsend. According to RAICES director of education, outreach and development Jenny Hixon, every penny will be used to help reunite immigrant families, represent them in court and facilitate help for them while they’re on U.S. soil.

“I wish you could see the office we sit in. My door doesn’t have a doorknob because we take all the money and stick it right back into legal services,” Hixon said. “We’re so excited and happy we can serve people because when someone needs help and you don’t have the capacity to help them, it’s just terrible.”

The organization will use the funds to beef up two programs in particular, Hixon said. The Legal Representation, Advocacy and Education Project will help provide universal representation for unaccompanied immigrant children in Texas — in essence, for the kids taken from their parents at the border. The Family Reunification and Bond Fund will pay the bonds for adults being held until they can be tried, sometimes for months or even years. Bonds are set at a minimum of $1,500 and are typically $5,000 to $10,000.

“If we can’t get the parent to a bond hearing, we can’t get them out,” Hixon said. “If they get deported, the kid goes through the system without them. That’s why our work is focusing on getting the parents access to legal representation. They don’t get that as an immigrant. They get run through an adversarial system alone.”

When kids and parents are separated at the border, Hixon explained, parents are usually taken to a detention center while they wait for a trial. Unable to raise money for bail, they can wait there for months, or even years, she added. If or when they do get out, many times their children are difficult to locate.

“The sheer panic a parent must feel, I can’t imagine,” she said. “We hope to help everyone. Last year, our family detention program served 7,000.”

RAICES, with headquarters in San Antonio, has been on the frontlines of the immigration battle for over 30 years. Hixon said that while a light is now being shined on the issue, the detention centers and cage-like structures coming out in news stories now have actually been around for years.

“The system isn’t set up for kindness, compassion or justice. Now that people know and people see, if they keep the pressure up, there is really a chance that we can change this,” Hixon said. “We are rejecting these policies.”

The immigrant process is a grueling, multi-step, dehumanizing affair. Hixon said that first, all people go through what’s nicknamed “The Icebox” because everything is kept very cold and very bright. That’s where she said the photos with the space blankets took place. This is also where parents are getting separated from their kids, she said. The parents are typically then prosecuted for illegal entry and begin to move through the court process. If and when they make it through, sometimes their kids are no longer there.

The next step has been dubbed “The Dog Pound.” This is where the photos of children in what look like cages are being taken, according to Hixon. After that, immigrants are moved to other detention facilities across the nation — the children and adults being filtered into two different systems. There is no coordination between the two. Hixon says at least the system for unaccompanied children is somewhat humane.

Adults, on the other hand, go into for-profit detention centers, she said. Many are just seeking asylum in accordance with our nation’s law.

“Asylum is like if someone comes to your front porch and knocks on your door and says, ‘If you don’t let me in, I’m going to die,’” Hixon said. “So you let them in, and they sit in the living room and you figure out what to do. As a country, we’ve now closed that door and said we don’t care, you have to stay out. That shouldn’t be who we are.”

With the millions pouring in, RAICES is beefing up relief efforts. The organization is hiring more attorneys and professionals, and fulfilling more of their dream initiatives.

“This is one of those cases where we can now do things we’ve always wished we could do,” Hixon said. “We’re holding an open call for applications to provide a matrix of nationwide help for people, from therapists and psychologists, to transportation point people, to people helping to register children for school and, of course, attorneys and legal help.”

Once the helpers in all fields apply, RAICES will perform background checks and vet the volunteers. Then they’ll be able to send immigrants and their families where they need to go with a list of people in that area to contact who can help them.

RAICES will get the sum by mid-July, when Facebook releases the funds raised the previous month through its donations services. Facebook and the Willners take nothing; 100% of the donations go to the organization. So, what else can concerned citizens do after donating?

“People need to be sure that every single elected official that is in their area knows about this,” Hixon said. “Call Jeff Sessions, call the White House, call every legislator you have. Everyone can do something. If you can’t donate money, give your time. Teach ESL classes, help get immigrant children enrolled in school. If you can’t volunteer, you can get educated about the issue and make sure you are the voice of reason, that you can tell your friends and family what is actually going on.”