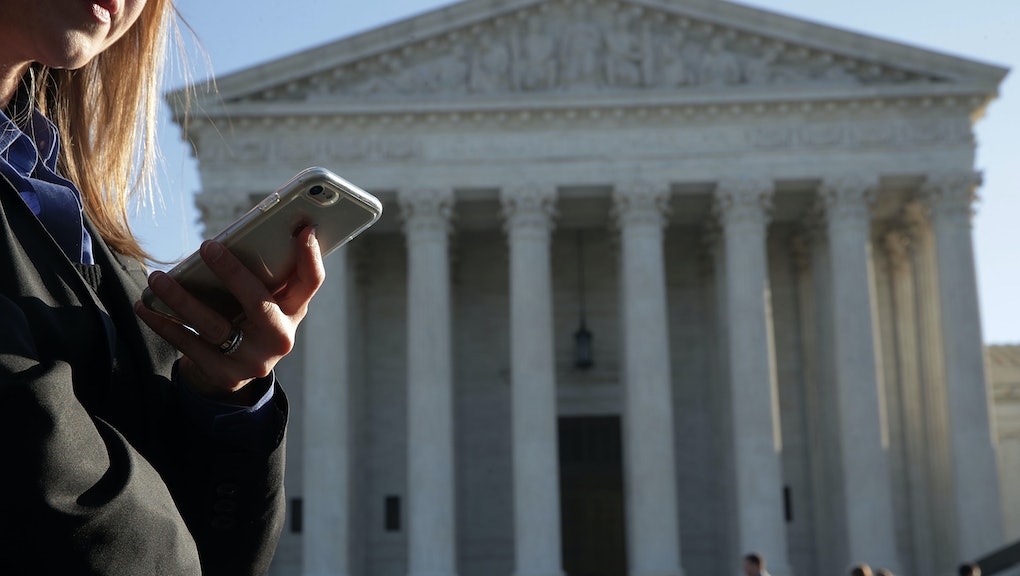 The U.S. Supreme Court upheld Americans’ right to keep their digital information private Friday, as they ruled that cell phone location data is protected from warrantless searches under the Fourth Amendment.

In a 5-4 decision in Carpenter v. United States, the court ruled in favor of robbery suspect Timothy Carpenter, whose cell phone records the FBI seized without a warrant under the Stored Communications Act. Carpenter argued that the location data the government was able to gather through the records should be suppressed, as it violated the Fourth Amendment. A lower court ruled, however, that since Carpenter’s cell phone data had already been shared with his wireless carriers, Carpenter had no reasonable expectation of privacy.

The Supreme Court reversed the lower court’s ruling Friday, noting that cell phone location records “hold for many Americans the ‘privacies of life’” and should thus be protected under the Fourth Amendment, which asserts the “right of the people to be secure in their persons, houses, papers and effects.”

“We decline to grant the state unrestricted access to a wireless carrier’s database of physical location information,” Chief Justice John Roberts wrote in the court’s majority opinion. “In light of the deeply revealing nature of [cell-site location information], its depth, breadth and comprehensive reach, and the inescapable and automatic nature of its collection, the fact that such information is gathered by a third party does not make it any less deserving of Fourth Amendment protection.”

The court struck down the idea that cell phone users voluntarily “share” their data, noting that “carrying [a cell phone] is indispensable to participation in modern society.” Since cell phone location data is logged automatically “without any affirmative act on the part of the user beyond powering up,” Roberts wrote, “in no meaningful sense does the user voluntarily ‘assume the risk’ of turning over a comprehensive dossier of his physical movements.”

Roberts also rejected the government’s argument that asking wireless carriers for cell phone records is “a garden-variety request for information from a third-party witness,” explaining that technology-related inquiries go far beyond other evidence-gathering efforts.

“The Government’s position fails to contend with the seismic shifts in digital technology that made possible the tracking of not only Carpenter’s location but also everyone else’s, not for a short period but for years and years,” Roberts wrote. “Sprint Corporation and its competitors are not your typical witnesses. Unlike the nosy neighbor who keeps an eye on comings and goings, they are ever alert, and their memory is nearly infallible.”

In his opinion, Roberts stressed that the court’s decision was a “narrow one” that did not extend to a number of other digital privacy concerns, including security cameras and data collection involving foreign affairs or national security interests.

Both supporters and critics of the ruling, however, acknowledged that the decision could have broad effects. In his dissent, Justice Samuel Alito predicted the ruling will “cause upheaval” when it comes to information requests in investigations, noting that “treating an order to produce like an actual search, as today’s decision does, is revolutionary.”

Despite its narrow scope, the Supreme Court’s ruling is a significant win for digital privacy advocates. In a “friend of the court” filing for the case, major technology companies such as Apple, Google and Microsoft argued the importance of adapting the Fourth Amendment to today’s digital landscape, writing: “When customers transmit personal data to technology companies ... they reasonably expect that data and the metadata generated alongside it to be securely stored and remain private as to the rest of the world. They should not be forced to relinquish Fourth Amendment protections against government intrusion simply by choosing to use those technologies.”

The Reporters Committee for Freedom of the Press and other media organizations also linked the Fourth Amendment to the First Amendment and freedom of the press in a separate court filing, explaining that warrantless searches of cell phone location data could result in the surveillance of journalists’ activity and reveal their sources.

In a statement, the American Civil Liberties Union, which represented Carpenter, hailed the ruling as a “groundbreaking victory for Americans’ privacy rights in the digital age.” The organization noted that the ruling’s implications could extend beyond just the cell phone location data at the heart of Friday’s decision, as it provides a legal basis for future digital privacy cases.

“The Supreme Court has given privacy law an update that it has badly needed for many years, finally bringing it in line with the realities of modern life,” ACLU attorney Nathan Freed Wessler, who argued the case before the Supreme Court, said in a statement. “The government can no longer claim that the mere act of using technology eliminates the Fourth Amendment’s protections.

“Today’s decision rightly recognizes the need to protect the highly sensitive location data from our cell phones, but it also provides a path forward for safeguarding other sensitive digital information in future cases — from our emails, smart home appliances, and technology that is yet to be invented.”