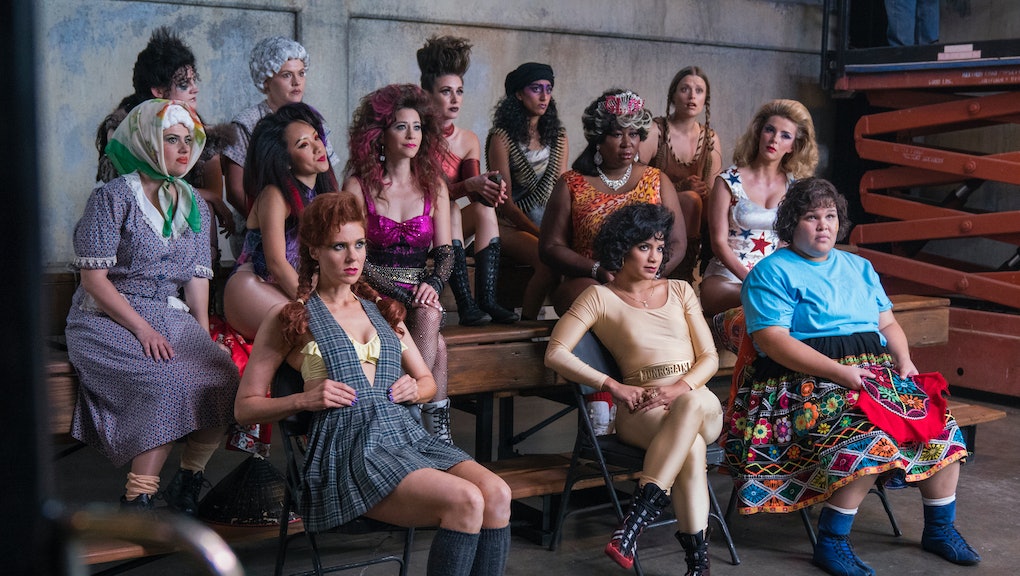 On any show set in the 1980s, the fashion is bound to be legendary — think Stranger Things or the super-duper sad flashbacks on This Is Us or FX’s recent hit Pose. But this is definitely the case with Netflix’s Glow, which has a second season premiering on Friday.

To celebrate this show and its many outrageous outfits, Mic spoke to its costume designer, Beth Morgan, about how the second season differs from the first, her own inspirations and bringing things like body hair to TV. This interview has been edited and condensed for the sake of clarity.

Mic: When you were first brought on to costume Glow, what were your initial thoughts?

Beth Morgan: I felt like there was so much firing in my head. The first thing I did was a lot of research. I grew up in the ‘80s — I was born in ‘79. I remember it and I grew up in the midwest, and a lot of my favorite movies were The Karate Kid and Girls Just Want to Have Fun and Weird Science.

I even went through tons of old J.C. Penney magazines and got a lot of my family photos. This is really the story of the everyday woman, and I wanted to feel that nostalgia for, like, your aunt at a barbecue.

Where did most of these costumes come from? Is it largely vintage?

BM: It’s very daunting to not even have a stitch of clothing when you start on a massive project like this, so you just have to amass clothing. We would do shops and huge pulls at vintage warehouses and vendors that’d send us stuff sometimes.

We’ve been so fortunate to find so many unique pieces that are so perfect. We make whatever we can’t find.

We made all the wrestling costumes ourselves. The spandex of the ‘80s and the spandex of today is not the same thing. And I buy a lot of leotards on Etsy.

I know that when you do shop for this amount of vintage clothes, particularly from the ‘80s, you run into the issue of finding a perfect piece that is absolutely not the right size. And you have characters that aren’t all size 2s.

BM: There’s a lot of smaller things in the ‘80s and our cast is all types of body types, so that’s when we’ll use the vintage as inspiration or we cut it and add an element. So there is the challenge of finding these really amazing things and them not working because of fit reasons.

How would you say the first season’s style differs from the second? What were your inspirations this time around?

BM: It’s not that we’re going further in time that’s changing things, it’s what everyone’s going through. In the first episode they go to the mall, so there’s an opportunity to get splashier. Then later on, the storyline gave us the opportunity to use more music video inspirations like Madonna and Twisted Sister, as opposed to family photos.

I felt like this year we got into the subcultures of L.A. Season one, I was watching The Karate Kid and Cheers, whereas this season felt more like heightened fashion. We did Vogue research, and thought about what people like Sarah Jessica Parker and Cher wore in real life. Not them on camera, but them in streetwear.

We bring in bolder colors and more extreme silhouettes. We really had fun this season.

A number of wrestling costumes, particularly for the first season, had racist undertones because of the characters some of the women were assigned in the ring. There was “Welfare Queen” and “Fortune Cookie” and “Beirut the Mad Bomber.” How did you approach those costumes, and were you worried about them being written off as just a racist costume, and not seen as commentary?

BM: Wrestling is all about the stereotypes. It’s about seeing those stereotypes and blowing them up and using them as commentary to show how ridiculous they are. It’s looking at Welfare Queen and looking at those stereotypical pictures of the “welfare queen” and thinking: “What about being in that nightgown and fur coat signifies to people that she’s taking advantage of the government?”

What we loved about that is the subtle opulence. We originally tried this oversized nightgown, but the idea behind that wrestling outfit is that it feels like tacky opulence. “If you won the lottery, what would you buy?”

It’s actually about the initial reaction people see in our characters. If they do feel a racist emotion when they see someone like Welfare Queen or Beirut, then that calls that out to them. We want them to have either a positive or negative reaction and making them evaluate why that is.

One thing that I recently realized about Glow is that it often shows female bodies as they actually are. These women aren’t out there not jiggling. There’s body hair and cellulite and it’s not a topic of conversation.

BM: We don’t use any Spanx on our show. Everybody is their natural body. The truth is that across most of America, people don’t care. We get really focused on urban areas, but in most of the country people have self-confidence that doesn’t rely on the judgement of their attire.

“Naturally we’re strong and have a lot to say, and that doesn’t get watered down because we don’t have a pushup bra on.”

You can look great and proud and not be a size 2. Your nipples can be hard. Nipples can be fine. We were laughing so hard because Mariana [Palka], who plays Reggie, she never shaves her bikini line. And she had a lot of hair on her bikini line, and we just left it to do what it does in that leotard. She doesn’t shave her armpits either.

These were the things we thought were important to say about women. Naturally we’re strong and have a lot to say, and that doesn’t get watered down because we don’t have a pushup bra on.

Did that decision stem from thinking about what women in the ‘80s actually looked like?

BM: In the ‘80s, even more than the ‘50s and ‘60s, you have all these power women entering the workplace. You have these movies like Working Girl and 9 to 5. It’s about corporate women. It’s not about them being perfect, it’s about being strong.

Another thing I noticed is that this show portrays female strength and confidence in a genuine way. That may be because some of these women are genuinely strong and buff, but I’m wondering how you used fashion to convey that mood.

BM: They definitely are confident in their clothing. Their clothing adds a layer of feminine strength in that it’s body conscious but not confining. I feel like because the way the show is set up and the atmosphere on set, there’s no question that you don’t feel like a badass. That immediately makes them stand with their shoulders back and that helps translate to the work.

Part of what works with the costumes is that everything is based in character and no choice is made frivolously. Why would they wear this clothing, and choose to wear it in this scene and stay true to what life would be? That’s something people have identified with. It has nostalgia but it doesn’t feel like Hot Tub Time Machine.

As viewers get ready for season two, what would you say they should look forward to in the costumes?

BM: The finale! There’s part of the last episode that creatively was my most satisfying moment. But there’s a lot of fun things to look forward to, and not only with the costumes.