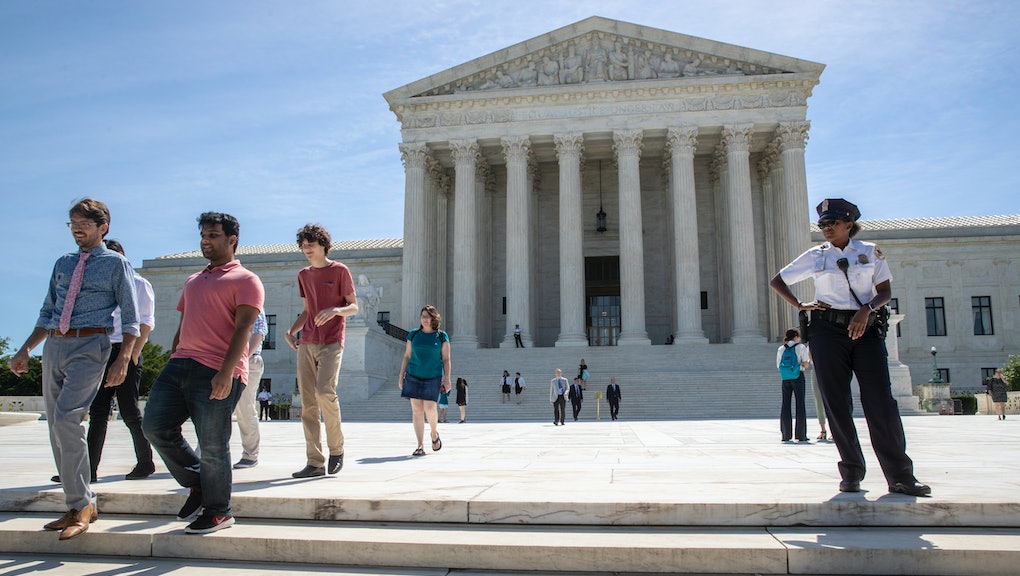 The Supreme Court ruled in favor of the third iteration of President Donald Trump’s travel ban on five majority-Muslim countries on Tuesday, in a 5-4 decision.

Chief Justice John Roberts wrote in his decision that Trump had used his executive authority to “suspend entry of aliens into the United States,” according to BuzzFeed News’ Chris Geidner.

“The [order] is expressly premised on legitimate purposes: preventing entry of nationals who cannot be adequately vetted and inducing other nations to improve their practices,” Roberts wrote. “The text says nothing about religion.”

In a rebuttal read from the bench, Justice Sonia Sotomayor recalled previous statement’s from the president calling for a “complete and total shutdown” of Muslims entering the U.S., and also noted Trump’s penchant sharing anti-Muslim videos on Twitter, including one titled, “Muslim destroys a statue of Virgin Mary!”

“Take a brief moment and let the gravity of those statements sink in,” she said.

The case was argued on April 25, and signs pointed to the conservative court ruling that the policy was lawful.

Trump had first sought the ban just one week into taking office in January 2017, but lower courts initially struck the policy down. The White House has repeatedly argued that the travel restrictions do not constitute a “Muslim ban,” a defense some from the majority-Muslim countries affected have disputed.

The challengers, led by the state of Hawaii, have argued the policy was motivated by Trump’s enmity towards Muslims. The government, however, claimed that if that were the case “it would be the most ineffective Muslim ban that one could possibly imagine.”

“Not only does it exclude the vast majority of the Muslim world, it also omits three Muslim-majority countries that were covered by past orders, including Iraq, Chad and Sudan,” Noel Francisco, the solicitor general, told the court in April.

The president responded to the court’s decision in a Tuesday morning tweet, and later called it a `tremendous victory’ and `moment of profound vindication’.

In a statement, the Department of Homeland Security also responded to the Tuesday ruling, saying that it, “confirms the legality of these critically important executive actions, and the DHS will continue to faithfully execute our country’s immigration laws and treat everyone we encounter humanely and with professionalism.”

“It is the duty of the government to ensure that those seeking to enter our country will not harm the American people,” the statement continued. “While we have the most generous immigration system in the world, it has repeatedly been exploited by terrorists and other malicious actors who seek to do us harm. President Trump’s executive actions take important steps to protect the American people by allowing for the proper review and establishment of standards to prevent terrorist or criminal infiltration by foreign nationals.

Btu Omar Jadwat, director of the ACLU’s Immigrants’ Rights Project, said Tuesday that the ruling “will go down in history as one of the Supreme Court’s great failures.”

“It repeats the mistakes of the Korematsu decision upholding Japanese-American imprisonment and swallows wholesale government lawyers’ flimsy national security excuse for the ban instead of taking seriously the president’s own explanation for his actions,” Jadwat said.