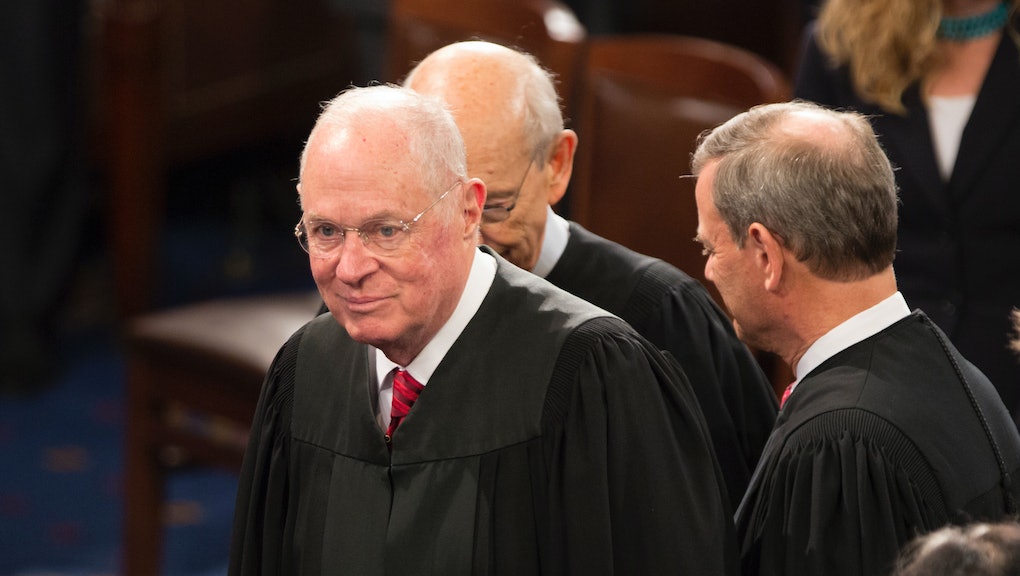 • The president is in Milwaukee where, at 10:30 p.m. Eastern, he will participate in a roundtable with supporters.

• The president will then travel to Mount Pleasant, Wisconsin, to break ground on the site of a new Foxconn facility before touring another facility.

The shocking retirement of Supreme Court Justice Anthony Kennedy has left the political world scrambling to assess what the implications are and what will come next.

For years Kennedy was considered a key swing vote on major issues like abortion, same-sex marriage, affirmative action and the death penalty for children. Now it appears that precedents on all of those issues could be imperiled.

In particular, the precedent in Roe v. Wade that upheld a person’s right against forced pregnancy is at risk with Kennedy’s retirement, thanks to an express campaign promise from Trump.

“Well, if we put another two or perhaps three justices on, [overturning Roe v. Wade] is really what’s going to be — that will happen,” Trump said, during a debate in October 2016. “And that’ll happen automatically, in my opinion, because I am putting pro-life justices on the court. I will say this: It will go back to the states, and the states will then make a determination.”

Whoever Trump chooses will likely decline to say how they would vote on a decision overturning Roe as part of a traditional song and dance that nominees do in order to appear objective about future cases.

But Trump’s selections for the court have been largely influenced by the staunchly conservative Heritage Foundation, meaning their positions on key issues like Roe will be thoroughly vetted to meet conservative priorities.

Today in Trump’s America: All eyes are on Senate moderates and Trump-skeptical Republicans

As the Senate barrels toward a vote on Trump’s pending Supreme Court nominee, Washington is watching two small groups of senators to see what they will do.

Republicans currently have a razor-thin, two-vote margin in the Senate, and with Sen. John McCain’s ailing heath keeping him off the Senate floor, Republicans may be down to just one vote.

That means that, if Democrats band together in opposing Trump’s nominee, just one Republican senator has the potential to change the outcome of the vote. Among those to keep a close eye on are Sens. Susan Collins (R-Maine) and Lisa Murkowski (R-Alaska) who both broke with their party to help tank the GOP’s health care overhaul in 2017.

On Wednesday, Collins told reporters it was a “mistake” for Republicans to block Obama’s nomination of Merrick Garland, but that it would also be a mistake for Democrats to do the same to Trump’s nominee, suggesting she isn’t prepared to vote against a Trump nominee from the outset.

Other potential allies include retiring Sens. Jeff Flake (R-Ariz.) and Bob Corker (R-Tenn.) who have publicly spoken out against the president many times before. But both Corker and Flake tend to be less critical of the president when long-term Republican priorities like tax reform are on the table, suggesting they may be tough to win over on this issue.

Democrats also have to keep their eyes on moderates in their own caucus, many of whom are up for re-election in states Trump won handily. Three Democrats in particular, Sens. Joe Manchin (D-W.V.), Joe Donnelly (D-Ind.) and Heidi Heitkamp (D-N.D.) all voted to confirm Justice Neil Gorsuch, and could break with their party again, in order to save their own re-election.

Capitol Hill happenings: How much will Democrats fight to block Trump’s nominee?

On Feb. 13, 2016, Supreme Court Justice Antonin Scalia died suddenly, and before his body was even cold, Senate Majority Leader Mitch McConnell issued a statement saying the Senate would not vote on his replacement until after the 2016 election.

Now Democratic voters are wondering if their elected officials have the spine to do the same. By late evening on Wednesday several senate Democrats had issued demands that Mitch McConnell follow the “McConnell Rule” and not hold a vote on the president’s nominee until after the 2018 election.

But McConnell, who has never cared much about charges of hypocrisy, made clear that he intends to push ahead with a vote in the fall, putting the ball back in Democrats’ hands.

Some progressives seemed to worry when Sen. Richard Blumenthal (D-Conn.) told NBC News that “The Senate should do nothing to artificially delay” a vote on Trump’s nominee, but on Thursday morning Blumenthal seemed to have changed his tune, telling the hosts of MSNBC’s Morning Joe that they were going to use “every tool” in terms of parliamentary procedure to delay a vote.

A previous version of this article misstated the circumstance of Kennedy’s leaving the court. Kennedy retired.