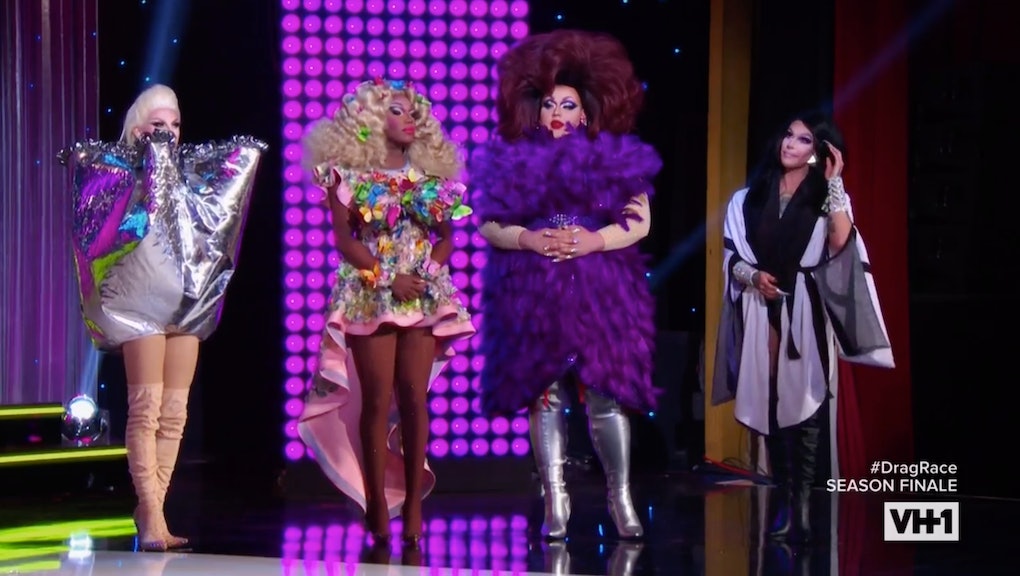 In the first lip sync on the finale of RuPaul’s Drag Race’s 10th season, semi-finalist Asia O’Hara started confidently miming the words to Janet Jackson’s “Nasty.” Beside her was fellow semi-finalist Kameron Michaels, hoping to outshine her and move onto the next round in this bracket-style lip sync battle for the crown.

The crowd had no idea they were about to witness one of the most disastrous performances in Drag Race herstory.

Once the song began picking up, Asia — with rose-bud-shaped adornments jutting from her chest, a colossal, teased-out blonde wig atop her head and plastic butterflies peppered across her entire body — started fiddling with a container strapped to her wrist. She opened it, revealing an actual butterfly sitting inside.

It was clearly very dead, or else just suffering from a terrible case of stage fright. In a last-ditch effort to encourage the little guy to flutter poetically through the air, Asia tried to make it perch on her finger in hopes that it would spring back to life. It flopped lifelessly to the ground.

Something has gone terribly wrong.

The song marched on, with Asia attempting to carry out a series of dramatic reveals, none of which went according to plan. She removed one of her flower bud breasts, glancing down to see if the butterflies hidden inside were still alive. Maybe they were? Who knows. She threw the bud high into the air. She did the same with her other breast, and finally, opened the second container on her other wrist. Zero butterflies, as far as the audience could tell, actually did any flying.

The camera cut to Drag Race competitors eliminated earlier in the season, sitting in their chairs with horrified, befuddled expressions on their glammed-up faces as they tried to figure out what the hell was going on.

Finally, we saw a zoomed-in shot of the floor. Cut to: a small group of butterflies huddled on the ground — alive — walking slowly across the stage drenched in purple light, wings flapping lazily along with the music.

It should come as no surprise to you that Asia very much did not win this lip sync. While Asia’s increasingly horrific butterfly stunt unfolded, her competitor, Kameron, was lip syncing confidently and precisely, handing Asia her ass simply because she didn’t endanger any living beings.

It was a particularly egregious, disastrous scene by Drag Race standards, but if you’ve been keeping up with the show, it’s easy to see why Asia would feel the pressure to orchestrate something so ambitious. In last season’s finale, the New York City-based, artsy queen Sasha Velour pulled off an instantly iconic, beautiful reveal during a lip sync to Whitney Houston’s “So Emotional.”

Reveals have been a part of Drag Race performances for many years — Roxxxy Andrews’ matryoshka doll-style wig unveiling in season five comes to mind — but Sasha’s roses amped things up to a whole new level. These days, unless you have some kind of gag-worthy, theatrical reveal in your routine, you risk being outshined by your competition, like how Sasha’s fellow lip syncer, Shea Couleé, was last season.

The distinction between then and now, of course, is that nobody knew what Sasha was about to do at the time. There wasn’t really an indication, externally, that she had some kind of reveal planned. As soon as screenshots from the season 10 finale started surfacing though, fans were quick to point out how absurdly bulky the costumes were, indicating we were in for ... something.

To their credit, the other reveals during the season 10 finale were nowhere near as catastrophic as Asia’s, but they certainly weren’t anywhere near as enchanting as Sasha’s roses. Eureka’s bulky, feathery, purple dress unfolded to reveal a sleeker, red dress underneath. Under that was yet another outfit. No live beings were harmed.

And Aquaria — another artsy, NYC-based queen — managed to unveil hidden glitter cannons strapped to her legs during the final lip sync, pumping out bursts of confetti into the air to the raucous pop anthem “Bang Bang.” (RuPaul ended up crowning Aquaria the season’s winner, very deservedly so.)

As long as Drag Race keeps this bracket-style lip sync elimination format for the finales — this year is the second in a row in which that’s been the case — theatrical reveals are unlikely to go away. For better or worse, Sasha Velour raised the bar, setting expectations for what a queen has to do to win the crown. Asia’s dead butterflies were a worst-case scenario for this trend, one that should serve as a cautionary tale to any future Drag Race competitors: If you’re going to plan a reveal, keep it clean and rehearse, rehearse, rehearse.

At the very least, your lip sync should never result in an apology to animal rights organizations.

Until next season, my loves.