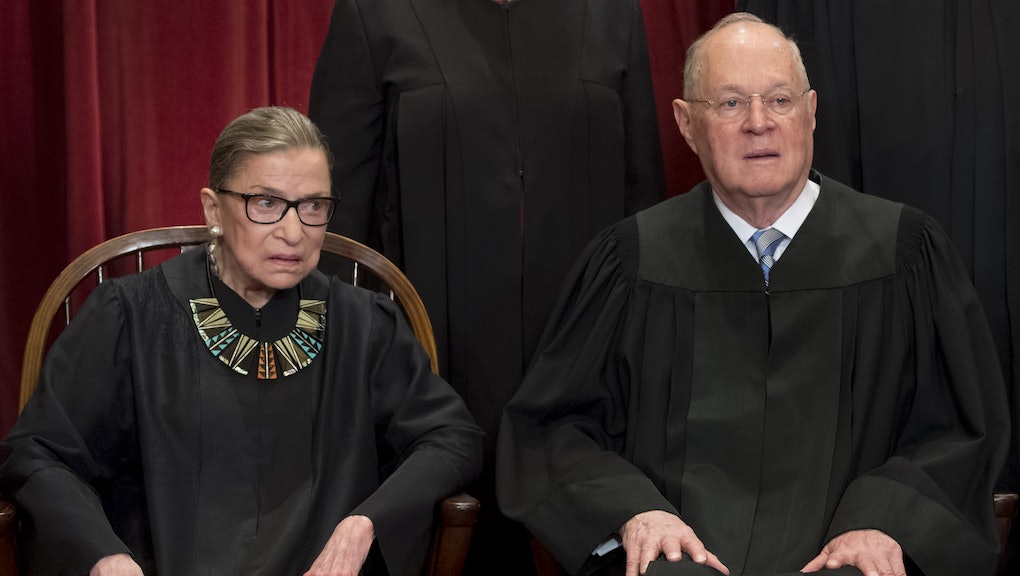 Court packing might become the next internal battle for Democrats

Experts who study the power dynamics of Washington have a message for Democrats looking to stop the Trump administration from abusing its power: When they go low, you go lower.

On Tuesday, Democrats and progressives across the country expressed collective dismay as Supreme Court Justice Anthony Kennedy’s announcement that he will be stepping down and allowing President Donald Trump to fill another lifetime appointment to the nation’s highest court.

Now one political scientist says that Democrats should respond with a drastic political maneuver of their own. David Faris, an associate professor of political science at Roosevelt University, is the author of the aptly timed book It’s Time to Fight Dirty: How Democrats Can Build a Lasting Majority in American Politics in which he advocates that Democrats should engage in a number of previously verboten political tactics, including “court packing” — whereby a president changes the balance of power on the Supreme Court by simply adding additional judges to it.

“In my mind there’s no difference between stealing a swing seat on the Supreme Court the way they did and adding justices to the court to reverse that majority,” Faris said. “Both of those moves are fully constitutional — both of them are dramatic violations of pre-existing norms — but they’re both perfectly legal.”

Court-packing is most famously remembered as a ploy by President Franklin Delano Roosevelt to attempt to protect his New Deal projects from the more conservative Supreme Court. Roosevelt laid out his plan in a 1937 bill called the Judicial Procedures Reform Bill which would have added as many as six new justices to the court for every sitting justice that was over 70 years and six months old and who had served on the court for at least ten months.

Roosevelt’s attempt at court-packing is historically remembered as his second most controversial policy decision, after the use of interment camps to hold Japanese Americans during World War II (a policy that, ironically, is also being resurrected in 2018 through the Trump administration’s immigration crackdown).

But Faris said the the plan was actually more viable than the history books would have you believe.

“As part of my research I discovered that there were congressional allies to FDR that were willing to go along with a less expansive plan — A plan that would have added just three justices to the court.” Faris said. “We’re still at a five-four majority for conservatives right now... there’s no need to add four, or six or eight seats to the court. You only need to add two.”

Faris published his book in April, months before Kennedy announced his retirement. But he says that the current news cycle has only strengthened his resolve the Democrats should pursue court packing in order to restore the balance of power in Washington.

“I finished the book last summer and this was the chapter I was least certain about — I thought it would get the most pushback from institutional Democrats and people committed to norms and rules,” Faris said. “I no longer care about that at all.”

Since Trump’s election, Democrats have been embroiled in an internal debate about the sanctity of institutional norms and rules that have been eroded by Trump and the Republican party.

Establishment Democrats have repeatedly called for their party to adhere to previously unspoken rules about norms and “civility” among Washington’s political class, even as the president himself ignores those rules in pursuit of his agenda.

For progressives, this strategy is viewed as a kind of unilateral disarmament is a Washington where it has become increasingly clear that exercises of power are only constrained by what is actually written into law, and not gentlemen’s agreements between the two parties.

A recent example of this debate arose on Wednesday, when Politico reported on a behind-the-scenes promise that Senate Minority Leader Chuck Schumer made to GOP leaders. Schumer reportedly told Republicans that, should Democrats reclaim power in the chamber, he will preserve the legislative filibuster — a self-imposed Senate rule requiring a supermajority 60 votes to bring a bill up for a vote.

Speaking to NBC News’s Garrett Haake Blumenthal said the Senate “should do nothing to artificially delay” Trump’s nominee, but that he would encourage Trump to take his time with the decision and make a centrist choice.

For Faris, the Democratic Party’s insistence on maintaining these norms is tantamount ceding power to Republicans altogether.

“[Democrats] keep hoping that they’re going to wake up one day in the sort-of-normal Washington, D.C., they grew up in,” Faris said. “For norms to be restored there has to be a recognition from the other side that they actually violated one.”

Despite his support for court packing, Faris doesn’t expect that legislators in today’s Washington would ever be able to build enough broad support to put such a proposal into effect.

Instead he thinks its more likely that court packing could be used as an opening bid for Democrats in order to pursue more moderate institutional reforms to the Supreme Court.

Specifically, Faris thinks that lawmakers could come to an agreement on a constitutional amendment to end lifetime appointments for Supreme Court justices.

“The entire appointment system to the Supreme Court is completely broken, not just by the Merrick Garland stuff, but by they way it’s just a lottery to begin with.” Faris said. “I think it’s realistic to open up the conversation over the next two years, to ask our representatives, ‘what is your plan for the court?’ I’d like to see people asking the major Democratic [presidential] contenders that question.”