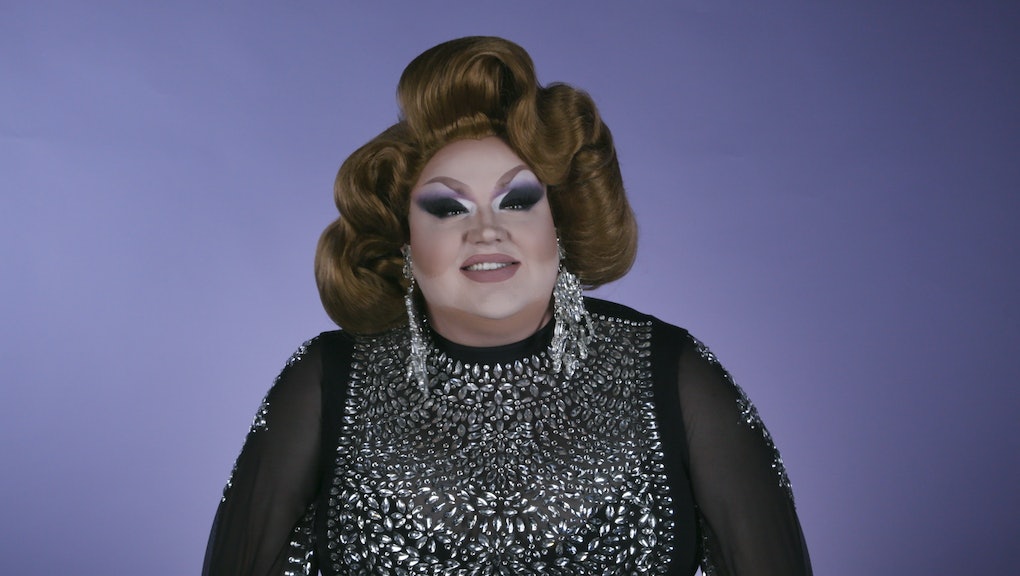 Though she didn’t come away with the crown, season 10 proved a victory for RuPaul’s Drag Race runner up Eureka O’Hara. After leaving season 9 early due to an injury, this returning queen proved she was more than just a one-trick kitty girl, singing, dancing, acting and eating her way to the top.

After her lip sync against Aquaria had them both advancing to the finals, Eureka and Kameron Michaels were unable to edge past Aquaria’s seemingly inevitable win. Still, her legacy on the show will outlive the season finale.

Mic spoke with Eureka O’Hara about the elimination and what’s next for her drag career.

How were you feeling immediately after the finale taping, ‘cause there’s been a few weeks between filming and now?

EO: Anxious, you know? Nervous. Afraid. You never know how it’s going to get painted or what it’s going to look like in the end. You can hear the audience and of course the people closest with you tell you the best scenario of yourself as well as and I heard a lot of good things about everyone. But just... anxious.

What sort of preparations went into the finale for you and how important were reveals?

EO: I wanted to do reveals that I’ve already done or was comfortable with. I tried to be mindful of getting too creative because it could potentially fail. So I did pre-prepare for that. I was like ‘I have a feeling everyone’s going to be doing all the reveals so what’s going to help me is to keep it clean because I think it’s going to make the energy nervous.’ That was how I pre-planned it. My first look was intended to make fun of reveals almost. I wish I had had a couple more to make it more obvious. Just trying to show different phases, from the old school drag that I learned and was taught down to the pageant dance fringe costume down to “this is who Eureka is now” in this mirrored, sexy leotard with this ponytail feeling every bit of sexual fantasy.

You were repping for the big girls this season, which is a very large community with many disparate feelings to have to represent. Was that challenging?

EO: It wasn’t as hard as someone might think because I represent it every day. I’ve been representing the big community by putting myself out there and showing myself vulnerably and confidently and exposing myself for quite a while. It’s a lot of pressure because you know how desperate big people need to feel better and we need to feel like we can win. It was hard to be that representation in showing that bigger people have a place that we can be picked.

You’ve been an outspoken and at times controversial queen this season. I’m not so curious about regrets as I am curious if there’s any situations you would have handled differently in retrospect?

EO: For sure. The only thing that was really bad was that first argument with me and The Vixen. Other moments weren’t anything I started or stirred. What I’ve learned is that I don’t always have to have the last word. The only thing I would have done differently is probably asked her about it instead of being passive aggressive because that’s what really was happening. That wasn’t cute. It wasn’t cute how I acted instead of just talking to her. I could have just talked it out. I could have been like ‘Girl, what’s up?’ and come at it in a more grown way and maybe we could have had a conversation about it. Maybe the narrative would have went in a completely different direction. Something that I’ve learned about myself and about society is that sometimes we think we know what people are going through and how they feel when what we need to do is shut the hell up and listen and let them tell us.

A lot has been written and dissected about the fandom this season. You’ve been on the receiving end of some viciousness. What are your thoughts surrounding the racism and sizeism present throughout the fandom?

EO: I love ‘em but I think that they are confused and for whatever reason they don’t see my truth and that’s something that I’ve obviously done. I’ve been affected by The Vixen and the way she has portrayed me to people. All I can do now is prove them wrong and let them meet me and get to know me. Because anyone that knows me can see who I am. I expose myself pretty openly as a person. And also some people are just going to dislike you because they want to. I’m hoping now that I’m no longer competition some of that will slack. And I think that it will. I think there was a lot of fear that I would win and they felt like someone else was more deserving than me. I think a lot of the fans thought like I had an upperhand and an advantage coming in and I think they were pretty shocked that I went as far as I did in the end, not because I’m not talented but because they’re not used to the comeback queen being that successful. Me and Shangela are the only two comeback girls that have made it this far coming back. From this point, I just know that there are a lot of fans out there that love the shit out of me and a lot of that hate me. But the thing is, you can’t be beloved by many unless you’re hated by some.

Success on Drag Race is often predicated on a solid story arc for a queen, often centered on personal or professional growth. What do you think your arc was this season?

EO: My arc was pretty dramatically obvious. I found and realized fully who I am as a character and my strengths as a performance and my confidence as bigger person. I learned it on this season. It was always there but I think it really shined through as far as me discovering myself. And also kind of how to act. Even during the season, filming some stuff, I noticed things where I was a little anxious and a little intense during the beginning of the season but I grew and worked through the fear that was holding me back. Girl, I was so insecure throughout so many of the challenges.

EO: The Eureka that entered the workroom was a scared child, and I’ve grown up a lot and I’ve even grown up since season 10 filming. I’m a better adult. I’m a better entertainer. I have better fashion. I have better makeup. I came into this competition doing drag the way I was taught and the way I was raised and influenced by where I came from and because of this platform I’ve been able to create this character that is authentically what I want it to be and my skills are growing everyday because now I’m getting to designer Eureka myself.