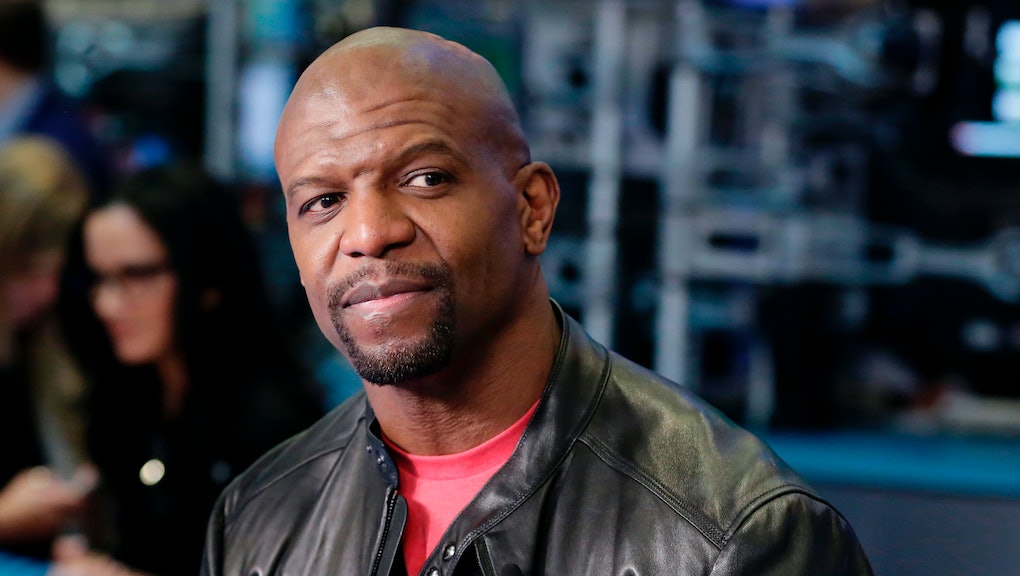 The taunting of Terry Crews is a disappointing low

As the story often goes, 50 Cent has incensed the masses with his gross displays of immaturity and idiocy. The latest controversy stems from his reported public taunting of actor Terry Crews about his sexual assault. In since-deleted posts on Instagram, 50 Cent mocked Crews for not responding in a violent manner.

When called out on his antics, the ever-petulant 50 remained defiant and once again made his feelings about Crews’ situation clear, this time on Twitter.

To Crews’ credit, when asked about 50 Cent’s mocking of him, the Brooklyn Nine-Nine star only said, “I love 50 Cent. I listen to his music while I’m working out. That’s the deal,” according to TMZ.

Still, an online petition has been filed urging Starz to drop 50 Cent from Power, the network’s hit series in which he serves as executive producer and actor. “Starz should send a message to the rapper and to all other potential producers and filmmakers that they will not tolerate this type of ignorance,” the petition reads.

A message should be sent, but spoiler: It’s highly unlikely that they will give 50 the boot. The show, which airs its fifth season premiere on Sunday and already has been renewed for a sixth season, is used to dealing with the rapper’s PR disasters. (That includes him publicly criticizing both Starz and Power’s creator Courtney Kemp.) The network should make it clear that it does not endorse his ignorance but, presumably, 50 Cent has some sort of amazing attorney that makes sure no matter how foolishly the emcee behaves, he cannot be banished from the show he helped build.

Whatever the case, 50 Cent may be the most famous person who’s sharing insensitive thoughts on Crews’ handling of his sexual assault — but sadly, he’s not the only one.

There was Def Jam co-founder Russell Simmons, who was reportedly spotted laughing in the comments of 50’s taunting of Crews. According to Business Insider, Crews said in November that Simmons reached out to him, asking him not to pursue charges against Adam Venit, from the Hollywood talent agency William Morris Endeavor, whom Crews alleged is the man who sexually assaulted him. In a more recent interview with the Breakfast Club, Crews elaborated on the matter, explaining that Simmons’ injection is emblematic of a larger system designed to protect abusers.

Mere days after this interview, writer and activist Sil Lai Abrams joined a long list of women accusing Simmons of rape, speaking in depth to the Hollywood Reporter about her experience.

Yet, there are also the unfamous men who, much like 50 Cent, have displayed the emotional intelligence of a pointy rock.

For those who can’t grasp why Crews didn’t react violently, Senator Dianne Feinstein allowed him the opportunity to explain during recent testimony before the U.S. Senate.

Emotional while speaking, Crews answered: “Senator, as a black man in America you only have a few shots at success. You only have a few chances to make yourself a viable member of the community. I’m from Flint, Michigan. I have seen many, many young black men who were provoked into violence. They were imprisoned or they were killed.”

There have been many people to rally behind Crews, but the fact that he even needs to be defended speaks volumes. Likewise, 50 Cent’s taunting speaks to the very toxicity Crews discussed at the Senate hearing. Men with nothing to lose have no idea why Crews didn’t just beat the hell out of his assaulter. They don’t care to focus on the larger issues of white men and white women feeling entitled to black men’s bodies, how sexual assault can be a problem for men, too, or that in the case of men like Terry Crews, they face penalization no matter how they respond to their assaults.

As Crews also revealed in his testimony, he won’t appear in The Expendables 4 after allegedly being threatened by the movie’s producer, Avi Lerner, as well as allegedly instructed to drop his suit against Venit. “The producer of that film called my manager and asked him to drop my case in order for me to be in the fourth installment of the movie — and, if I didn’t, there’d be trouble,” Crews said, according to Shadow and Act. To Crews’ point about abusers protecting other abusers, Lerner was sued in 2017 by a former employee for a range of allegations, including sexual harassment and creating a hostile work environment for women.

For several months now, Terry Crews has been a positive example for the many men who have sat in silence about their victimization. He spoke eloquently and passionately about how the issue of sexual assault can be particularly difficult for black men to process. Although not especially shocking, it is nonetheless sad that some black men would in turn make fun of his plight and, subsequently, behave no better than the white men who have allegedly sought to punish him professionally for daring to push for his humanity and agency to be respected.

Thankfully, Crews is mature, secure and speaking with purpose. He will indeed change lives for the better and make it easier for men — notably black men — to speak out. It’s just a pity that in the midst of his advocacy, men who look like him are turning this saga into a punchline. I wish I could laugh at how pathetic they are, but I can’t quite find the humor in anything that puts the blame on victims, and ends up shielding predators.