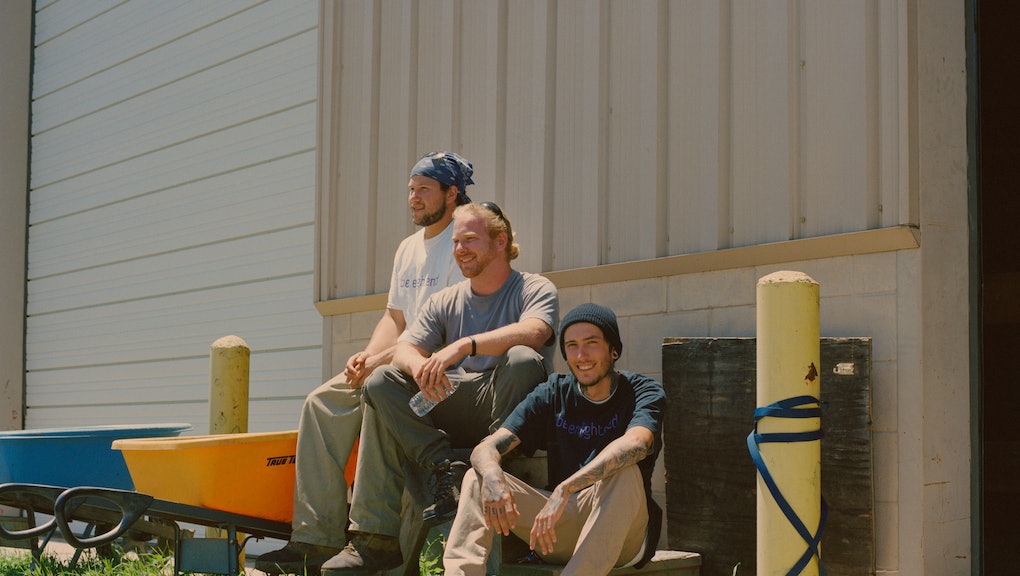 Recovery: From addiction, a brotherhood forms

Like many people at 21 or 22 years old, Jason enjoyed a drink or two. But beyond that, his experience with substances was practically nonexistent. His mother was a flower child from the 1960s, he explained, and allowed pot and alcohol in the house. But nothing more.

“She was the type that was like, ‘If you want to smoke weed, if you want to drink, you’re gonna do it around me and I’ll get it for you. That way it’s controlled in my house,’” Jason recalled. “It’s-inevitable-that-it’s-eventually-gonna-happen kind of deal. So, I never wanted to use. Ever.”

But that all changed after a car accident, in which Jason suffered severe injuries. A doctor prescribed him painkillers to deal with the aftermath — and almost immediately, he was hooked. “Right when I took the first medication, I felt like I thought I should feel my entire life,” he said. “And you know, it was cool because, at that point, it was manageable.”

As his prescription ran down, Jason asked his doctor for more pills to satiate his burgeoning habit. The doctor refused, and advised Jason instead to go to a methadone clinic, which would have more substances to mend the pain. Jason didn’t take the advice, and instead asked around on the street.

This was the 1990s, he said; heroin was still very much a dirty word, associated with terms like “junkies” and other stigmas left over from the 1970s, the last time heroin use had reached epidemic levels, prompted in part by Vietnam War soldiers who had been exposed to it while fighting abroad. He couldn’t ever imagine himself putting a needle in his arm — he was older, he told himself, and had held full-time jobs. But still, he needed the pills. On the street, they were $30 to $40 a pop without a prescription. He could only afford that for so long.

What else was there to turn to? “Once I found the alternative, it was all downhill from there.”

By age 20, David had been all over America. He had entered and left a total of 22 treatment centers across the country, he estimates. He was on the streets homeless more times than he can count. He didn’t see treatment as a means to recovery, he said, but rather a brief vacation — some time off before he could start using again.

“My first rehab, and then every other one after that, was just to get a break from getting runs — like from being on the run and getting high and being homeless and everybody hating me,” he said. “You know, I go to treatment and I’d get my break back for a little bit and then I’d get back out.”

When David entered his first rehab at 17, he already had been using for nine years. It started off with alcohol and weed at eight, before progressing to heroin by 13. He said a divorced household gave him freedom to experiment. His high school career, he said, came to an end due to “outbursts.” (He then interjected, “Really, I hit my principal with a trash can.”)

While David cycled through unsuccessful treatments, relapses, and homelessness, his older brother, who had also had an opioid addiction, entered Enlightened Solutions. Its founder, Jennifer Hansen, told their mother that there was a bed for David, then 20, if he wanted it. She pleaded with him to come. Eventually, he gave in. “I was homeless. I was shooting heroin. I was robbing people’s sheds for random things to pawn,” he said. “My family didn’t want nothing to do with me.”

Once clean, David lived in one of the organization’s sober living homes for six months, before deciding to move to Los Angeles. He felt like he had a new lease on life, and on the West Coast, he could finally stay clean for good. “But I didn’t do any of the work,” he recalled, on a break from farm work. “A big part of staying clean is you have to want it, and you have to do the work. … You have to be physically, mentally and spiritually ready.”

Unable to afford the transition, David was forced to move back in with his father in New Jersey. Two years later, he relapsed worse than ever before. His dad kicked him out, and he sought shelter at motel rooms, on the streets, and a utility closet he broke into at his old high school.

At one point, he was able to rent a room in a friend’s apartment, where the floor laid littered with crack pipes and syringes that his adopted kitten would have to navigate through. David would urinate in plastic bottles (“I’m not gonna get up to use the bathroom, because that’ll ruin my high,” he impersonated himself saying), and use the caps to stir heroin with someone’s blood to shoot.

This, he said to himself, was it: rock bottom.

But one day, his mother arrived with an ultimatum: “She just was like, ‘You either go to treatment for real, or we’re never talking to you again,’” he said. “And for whatever reason, I just said, ‘Okay.’”

“I didn’t want to be getting high, but once you start, you pretty much use against your will,” he continued. “You get that high again, and there’s no stopping you. Nothing’s gonna come in the way.”

When Jack entered into detox at Enlightened Solutions, he didn’t know then that he had the same clean date as David. He was in a coma from alcohol poisoning; when he awoke, he settled on Oct. 20, 2017, as the official start time to his larger recovery. But alcohol was only a reprieve; Jack had started using heroin at 13.

“I had stints where I thought if I could stop doing dope then I could be good, and I could do everything else and I’d be fine,” he said. “‘I can’t be an alcoholic. I’m 22 years old’… [But] if you’re an addict, you’re an addict. You could be good for a certain amount of time, just drinking, and then all of a sudden you’re back to the needle. It just happens that way.”

Jack’s parents had entered him into treatment centers at a young age, but to no avail: He’d leave and start using again almost immediately. He subsisted each day on only beef jerky — and dope. He didn’t want to be told to get better; he himself wasn’t ready to tell himself that. “Everyone gets clean when they wanna get clean,” he said. “No one could tell me when I was 19 years old that I had to get clean.”

Now, the two arrive at sunrise each day to Hope Farm, a repurposed golf course near Enlightened Solutions’ main campus, home to several horses, chickens, cats and an extensive organic farm. It exists as a landing ground for those leaving detox, ready to work again and learn new skills in a budding industry.

Jason’s downhill spiral, from prescribed painkillers after his car accident to a severe heroin addiction, brought him to the doorsteps of several treatment centers throughout the Eastern Seaboard. When he attempted recovery again, this time at one of Enlightened Solutions’ sober living homes, his skill of building custom beds caught a supervisor’s attention. He was given a job at Hope Farm, where Jason, 36, actually met his 23-year-old roommate, Jake. Now, the two both work in construction and live in an apartment together nearby; Jason has been clean since March, and Jake, Christmas of 2017.

If you work at the farm, you’ll likely find yourself under the tutelage of Jay, who seems to always be smiling when he’s there. He’ll sometimes wake the guys up at 6:30am to get a head start on the harvest. For him, this is his natural habitat, an oasis. “Five years ago, to be exact, I was still using... I didn’t think I was going to make it out alive five years ago, you know?” he tells me. “Or be an organic farmer.”

Before he started using, Jay had some experience gardening at his parents’ house. Yet throughout his recovery, Jay has taken a number of organic farming classes and certifications and is now able to manage a group of at least four or five guys each day. He’s more than proud to tell you that seven members of his team have been clean for over four years.

Nikkita, 23. "I just feel more at peace when I'm surrounded by trees, and green. I guess it's just getting down to the basics, like yoga, reiki, coming out here and being out here with the horses, living off the land," says Nikkita, who works with Jay at the farm. "It's funny 'cause back in Virginia, the group of friends that I was runnin' with they had this idea of 'vice city'—you know, everybody had the thing that they did. An escape." He looks out at the pastures, and then remarks, "I'm from vice city, but I don't live there no more. I'm just happy here."

Stigma, for him, is a result of being unable to relate. For those without addiction, Jay said, making a mistake leads to a correction; you reroute your course and learn from your mistakes. But addicts don’t have that privilege; instead, they continue to self-destruct. So recovery is really like “learning to walk again,” he said, readjusting the behavior you developed while using.

While that task may seem daunting, if not impossible, to many, within the opioid epidemic there exists hope, Jay said. If you don’t believe him, come here to the farm.

“You see commercials, right, about addiction and get help and yada, yada,” Jay said. “And then you got shows that show the addicts on the street. And then they’ll spend 30 minutes of the show getting this guy into treatment. And then they get into treatment and then they spend like a minute in the credits like, ‘Oh, he went to so and so. Happy ever after.’”

“But that’s not realistic to me,” he said. “You want to show someone at their worst, the heart-wrenching, and hope, [but] the amazing part of all of it, is what they do with their life afterwards. If somebody could see me before and what I’m doing now. Like, yeah, all right, I work at a farm. It’s not like I’m curing cancer or anything, but if you would’ve seen me before... What it is, is that they can’t see how I feel inside. They don’t see that, they don’t know that.”