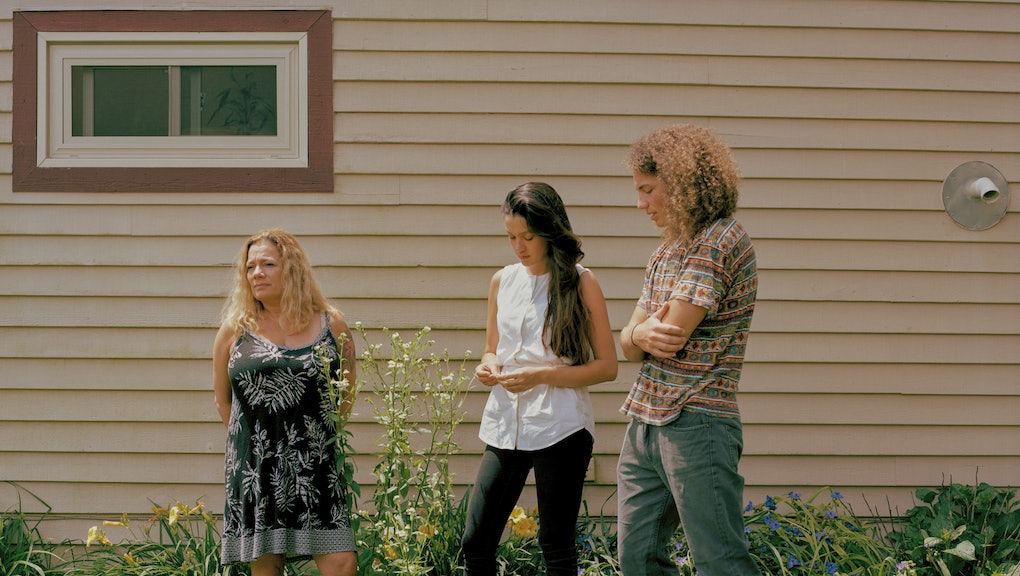 Recovery: All in the family

For Kiersten, addiction was another trait she had inherited, much like her brown eyes and long, wavy brown hair. Her family had seen over a century of the disease; both of her parents had histories of using, as did relatives. And so she felt that addiction was going to be a part of her personality, no matter what. “I did feel predestined, and I did have a lot of acceptance,” she said. “Like, ‘This is just who I am,’ and I didn’t really have a desire to do anything about it.”

Growing up, a divorce split the household and Kiersten’s mother, Antoinette, frequently moved the children around. Antoinette’s divorce offered a sense of liberation, one that enabled her to fall deeper into her own addiction, cocaine. For Antionette, it was a habit that had started off as a once-a-year treat — “It was the New Years’ Eve thing, you know?” she said — but then grew into a daily dose. “I left [my marriage] because of [my husband’s run with] the disease; I couldn’t do it anymore,” Antoinette said. “And then it was almost like, ‘Okay, it’s my turn.’”

With her mother unable to leave her bedroom some days, and her father out of the picture, Kiersten entered what she called “survival mode” in her early teenage years. New schools meant new identities, ones that she could fill in with whatever she wanted. It wasn’t like anyone was watching over her; if anything, she had become the de facto parent of the family, which meant caring for her younger brother, George.

“I felt an overwhelming sense of responsibility for my brother, and so that was hard because, obviously, kids aren’t supposed to be parents,” she said, wiping away tears in her mother’s living room. “I was still young myself, and had a lot of resentments. Because I just wanted to be a kid.”

Kiersten had her first drink at 11; by 15, she had entered a rehabilitative facility, based on a steps program, for cocaine. There, she met people who had come in for heroin, a drug she had long sworn to avoid, and, at that time, one that hadn’t made headlines. “For me, I was like, ‘Oh, I’ll never do that,’” she said. “Then all my nevers came true.”

Kiersten remembers the first time she tried opioids: It was her high school graduation day. She drove her new stick-shift car, a graduation gift, to her dealer’s home for painkillers, stalling and jerking the entire 15 miles there. She was told to take half, so she did. But it didn’t take long for her to spiral into heroin, the cheaper alternative. “My brain chemicals were just like, ‘Give me more, give me more, give me more,’” she said. “I just did whatever I could to get completely annihilated, because I didn’t want to feel anymore.”

Kay, 38. Like Kiersten, Kay sought drugs to escape from life."I just really need to learn how to stay stable — deal with whatever voids I'm dealing with, whether it's my dad's death, or me not seeing my kids, or my mom moving out of state, or my sister not speaking to me, or my brother not speaking to [me, because] I'm transitioning," Kay, who’s in recovery, said. "What the drugs would do for me was say, 'Screw it, screw them,’ and then I could get through my day."

Out of desperation, Kiersten told her grandparents that it wasn’t drugs or addiction that were the problem, but southern New Jersey — if she could leave behind her familiarities, she’d get better. And so she moved to Northern California, but the heroin habit traveled with her. She wanted to leave the pain behind, but felt guilty for leaving her brother to fend for himself with their mother in and out of rehab. She was running, and she knew it.

Out of treatment, Antoinette came to California to help her daughter move from San Francisco to San Diego. They went out with Kiersten’s friends for dinner, and came back to their hotel. One of Kiersten’s friends offered Antoinette a beer, and she accepted it. “I was like, ‘Wait what? You’re in recovery,’” Kiersten remembers saying to her mother. “And she was like, ‘I can drink. I just can’t do other drugs. Drinking isn’t my drug of choice.’”

“I had already relapsed at this point,” Antoinette quickly added. “She just didn’t know.”

Following her relapse, Antoinette entered herself into a treatment facility and lived at a spate of sober-living homes. By 2009, a job had given her stability and steady income. But for a long time, Antoinette was still paranoid to return home. “That relapse, it was really the most devastating, jarring moment in my process because I was like, ‘What did I do?’” she said, holding back tears. “My son was waiting for me to get our place together, and it was like, ‘Sorry, buddy, mom’s got to go back to treatment.’”

There was a gap of about three weeks between the time that Kiersten returned from Northern California in 2012 because she was using so much, and when she entered detox. “I dabbled for a little bit, but it got really bad,” she recalled. Antoinette, now completely clean, could see that her daughter was slipping away; she would ask Kiersten if she wanted to come along to her regular 12-step meetings. Her daughter would come, but wouldn’t share her story.

Kat, 27. Kat remembers the last thing her mother gave her after she relapsed from heroin: a list of homeless shelters in the nearby area. It was a last-ditch effort to save her daughter from the disease; her mother was a recovering alcoholic herself, and so heroin, to her, was an entirely different addiction, one which she had little answers for, Kat said. When Kat re-entered Enlightened Solutions after relapsing, she was given Kiersten's number. "When I got there, I was like, 'I know nothing and I don't know what to do.'” Kat said. “I was just crying. … ”She goes 'Me too!' She had been there. Just the idea of like, 'Me too! I'm okay. You can be okay.'"

Instead of seeking out a treatment center, Kiersten sought a more holistic and individualistic approach: She detoxed at home. She then started a strict regimen of Bikram yoga, acupuncture and organic dietary changes, and found a job stocking shelves at a local health store. She began to connect with people in the recovery community, especially through her love of jam bands. Over time, the addictive tendencies that she had shown since early childhood began to fade.

“Really, looking back, I just needed to surrender and surround myself with people who had gone through the same things [but] not necessarily the exact same stories,” she said later. “Because I know people from all over, from all different walks of life, from whatever the case is, any different story you can think of, but the feelings are always the same. And that was really important.”

Meeting Kiersten in 2018, she presents herself as a young woman who has total control over her impulses. Exuding serenity and a gleeful positivity that spreads to everyone she comes into contact with, Kiersten serves as the director of admissions and the self-dubbed “vibes compliance manager” at Enlightened Solutions, a network of rehabilitation facilities based in Egg Harbor City, New Jersey.

Kiersten was a part of Enlightened Solutions’ earliest discussions and ideations. She splits her time doing a variety of tasks for the organization, from the utmost essential work of mentoring those going through recovery, to spending her weekends setting up stalls at music festivals along the East Coast, promoting recovery in the communities that need it most.

The staff at Enlightened Solutions can often feel like a family, each with stories that connect to one another somehow. Most employees are former users, or have loved ones who experienced addiction and have come out on the other side. It seems like nearly everyone there has everyone else’s phone number on speed dial, just in case someone they know, and love, is in need of help.

In some aspects, Enlightened Solutions actually is a family business. The founder, Jennifer Hansen, was a close family friend of Kiersten’s, long before Kiersten sought her recovery. Hansen’s husband, Jonathan Greenberg, provides chiropractic services and pain management education to those in the program. And more recently, Kiersten’s mother, Antoinette, was recruited and trained to be a nurse at Enlightened Solutions’ new detox facility, located on one of the many bays of the south shore. She was hesitant at first to work there, herself still in recovery, but eventually the staff convinced her to come onboard.

“I love when I go to my home group and I see a client that was in the detox, that’s in the next level of care,” Antoinette said. “They’re clean and they’re excited to be clean. They’re trying to do something different and for them to see me like, ‘Oh my god. You still come here? You still do this?’ I think it provides a little hope, because it’s hard when you first start coming around.”

Antoinette was not working on a Tuesday morning in early June when Alfonso entered into detox. He had used only hours before, his hands still shaking hard from withdrawal. His possessions were put into a bug zapper, which eliminates any drugs that may still be on them. All he had with him were his clothes and a guitar.

This was Alfonso’s second time at this detox facility — he had heard of it through Hansen’s daughter, Mia, as the two both played music at venues in the area. When he called Hansen again, she told him to come; out of the many treatment centers he had been to, Enlightened Solutions was the only one where he felt comfortable, he said. He had already suffered from his eighth overdose, and was sleeping in a parking lot. It was time, he said, to make a change.

“My girlfriend is about to have a baby,” he said, pushing back tears. “She just found out she’s pregnant, and I found out the day before I was coming here. So now that’s just a whole other reason why I had to get my act together. I have to, and I don’t have too many more chances. How many more times am I going to OD, and be brought back? How many more chances at life am I going to get? That next bag might be my last one, and I’m not willing to take that risk.”