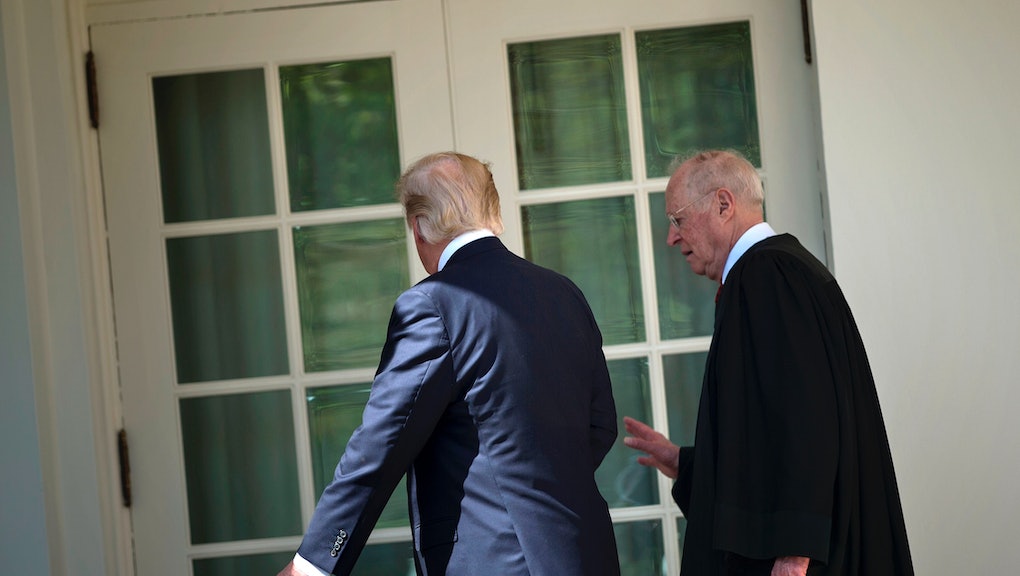 President Donald Trump confirmed Tuesday he had met with four candidates on his short list to replace retiring Supreme Court Justice Anthony Kennedy and reiterated he plans to declare the pick on Monday.

“I interviewed 4 very impressive people yesterday,” Trump tweeted Tuesday. “On Monday I will be announcing my decision for Justice of the United States Supreme Court!”

Kennedy announced Wednesday he would retire at the end of the month after 30 years on the Supreme Court, a departure that will give Trump another nomination — and an opportunity to cement a conservative majority on the nation’s high court for decades to come.

Here’s what you need to know about Trump’s potential nominees to replace the 81-year-old judge.

Amy Coney Barrett, 46, is considered a frontrunner to replace Kennedy.

Barrett, a professor of law at the University of Notre Dame, was tapped by Trump in 2017 to serve as a judge on the U.S. Court of Appeals for the 7th District and confirmed by the Senate in October.

She is a staunch conservative and an outspoken Catholic who’s also part of a conservative Christian group called People of Praise, the New York Times reported Monday. The group holds a number of controversial views, including that the husband is in charge of his wife and family.

Barrett is a member of the conservative Federalist Society, which vetted all 25 the names on the list Trump says he’ll pick all Supreme Court nominees from.

Barrett has previously argued that Catholic judges should be able to excuse themselves from hearing death penalty cases because of the church’s opposition to capital punishment — a position that led some senators during her last confirmation to worry that she may be more informed by her religious beliefs than the law on issues like abortion in future cases.

“You have a long history of believing that your religious beliefs should prevail,” Sen. Dianne Feinstein (D-Calif.) said in Barrett’s hearing in September.

While Barrett told Feinstein that she would “follow unflinchingly all Supreme Court precedent,” she has been criticized for views she’s expressed on abortion, LGBTQ issues and the Affordable Care Act.

Sen. Susan Collins (R-Maine), who could cast a make-or-break vote on whomever Trump picks, has publicly said she would not support a nominee “who demonstrated hostility to Roe v. Wade because that would mean to me that their judicial philosophy did not include a respect for established decisions, established law.”

Yet in spite of her potential opposition to abortion rights, Barrett got Collins’ “yea” during her circuit court confirmation last year, along with that of another key swing vote, Sen. Lisa Murkowski (R-Alaska) and three Democrats: Tim Kaine of Virginia, Joe Manchin of West Virginia and Joe Donnelly of Indiana.

That could make her a good strategic choice for the president, who has also reportedly expressed a desire to nominate a woman and someone who is young and could serve on the high court for four or more decades.

Brett Kavanaugh is regarded as another frontrunner for Kennedy’s seat on the bench.

The 53-year-old circuit judge who was nominated to the Court of Appeals in Washington, D.C., by George W. Bush in 2003, has a long history with him and Republican legal circles. Kavanaugh was a top member of independent counsel Kenneth Starr’s team that recommended impeachment for then-President Bill Clinton over his relationship with Monica Lewinsky.

Bush nominated him to the Court of Appeals in 2003, but was not confirmed until close to three years later, as Democrats accused him of hyper-partisanship. He’d served as a legal counsel and staff secretary to Bush and helped him install conservative judges on appeals courts.

“Mr. Kavanaugh would probably win first prize as the hard-right’s political lawyer,” Sen. Chuck Schumer (D-N.Y.) said at the time, according to the New York Times. Still, he was confirmed in 2006 and sworn in by Kennedy, whom he’d previously clerked for.

Like Barrett, Kavanaugh is a staunch conservative, as the author J.D. Vance observed in a Wall Street Journal endorsement on Monday, but Kavanaugh’s conservative bona fides are just one potential benefit for Trump.

Despite his role in the Clinton investigation in the 1990s, Kavanaugh has also previously argued that presidents “should not be distracted by civil lawsuits, criminal investigations or even questions from a prosecutor or defense attorney while in office.”

That could have big implications for Trump, who has spent his first year and a half in office in the shadow of investigations into his campaign’s connections to Russia and his longtime personal attorney and fixer Michael Cohen.

Raymond Kethledge, 51, is one of the lesser-known potential candidates to fill the upcoming Supreme Court vacancy. Kethledge, a judge on the Sixth Circuit Appeals since 2008, also a Bush appointee who spent time as a Kennedy clerk.

With a law degree from University of Michigan, Kethledge has been framed as something of an outsider — something that may appeal to Trump.

He had also been a leading contender to replace the late Antonin Scalia — a seat that eventually went to Neil Gorsuch, Trump’s first Supreme Court pick. Like Scalia, Kethledge is considered an originalist, and has ruled in favor of gun rights, as conservative commentator Hugh Hewitt noted in a glowing Washington Post endorsement Monday.

According to Hewitt, Kethledge is “Gorsuch 2.0,” a young candidate of “character, talent and originalist disposition.”

Amul Thapar, 49, is the fourth candidate Trump has reportedly met with. Thapar was Trump’s pick for the Sixth Circuit Appeals Court who has served as a circuit judge since 2017. He was considered for the Scalia seat.

Thapar, the son of Indian immigrants, would be the first judge of Asian descent to serve on the Supreme Court if selected and confirmed. Thapar hails from Kentucky, the home state of Senate Majority Leader Mitch McConnell, who has been one of his biggest champions.

“I think he’s absolutely brilliant, with the right temperament,” McConnell said of Thapar, according to the Associated Press.

McConnell’s backing is significant — it was his blockade against then-President Barack Obama’s nominee, Merrick Garland, that allowed Trump to get his first Supreme Court pick last year.

Like the others on Trump’s short list, Thapar is a hard conservative — so much so, according to the Courier-Journal, that his father claimed he “nearly wouldn’t speak to me after I voted for Barack Obama.”

Trump is expected to meet with other potential candidates before announcing his second Supreme Court pick.

It was reported on Tuesday that Trump interviewed Sen. Mike Lee (R-Utah) by phone, but the right-wing site Daily Caller claimed Monday that he is no longer in the running.

Thomas Hardiman, Trump’s second choice to fill Scalia’s seat, has also been reported to be among those in consideration for Kennedy’s seat.

Whomever Trump chooses is likely to face a contentious road to confirmation.

High-profile Democrats, including Sen. Kamala Harris (D-Calif.), have vowed to fight back against a hard right nominee — and have accused Republicans of “hypocrisy” in calling for a quick confirmation for Trump’s pick during an election year after blocking that of Obama during the 2016 race.

But McConnell has promised that Trump’s pick will be confirmed in the fall.