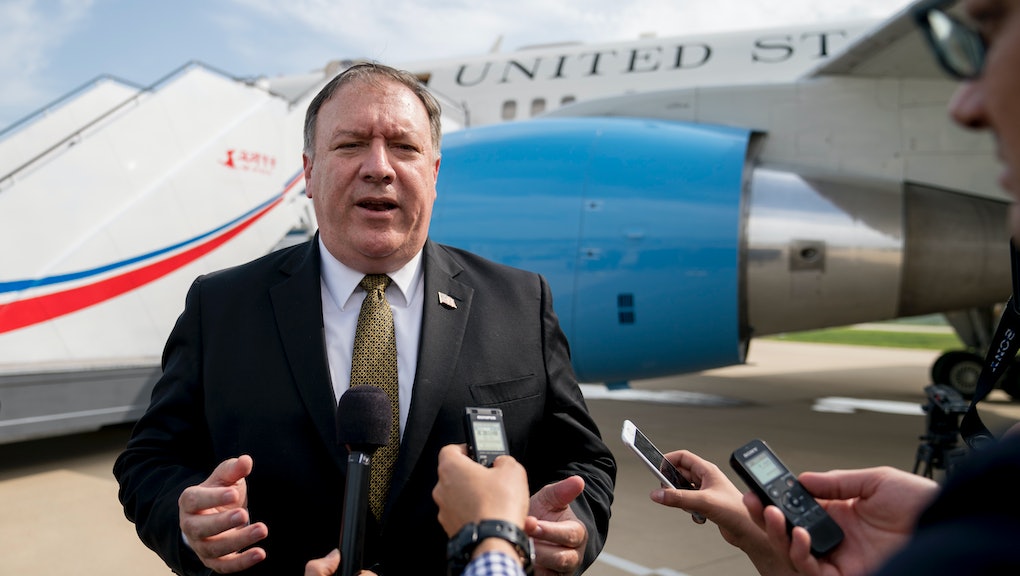 A statement released by the Ministry of Foreign Affairs criticized the United States’ “unilateral and gangster-like demand for denuclearization” and suggested the talks “brought us in a dangerous situation where we may be shaken in our unshakable will for denuclearization, rather than consolidating trust between the DPRK and the U.S.”

“We expected that the U.S. side would bring itself with a constructive proposal which would help build up trust true to the spirit of the DPRK-U.S. summit meeting and talks,” the statement read. “The issues the U.S. side insisted on at the talks are all roots of troubles, which the previous administrations also had insisted on to disrupt the dialogue processes, stoke the distrust and increase the danger of war.”

Pompeo shrugged off the statement Sunday following separate meetings with the foreign ministers of Japan and South Korea — although he didn’t disagree with the nature of the U.S.’s “gangster-like” requests.

“And so if those requests were gangster-like, they are — the world is a gangster, because there was a unanimous decision at the U.N. Security Council about what needs to be achieved,” he added.

The conflicting reports come at a tense time for North Korean-U.S. relations. Though Trump claimed “there is no longer a nuclear threat from North Korea” following the Singapore summit, U.S. officials cited by NBC News reported that the country is still covertly producing uranium for nuclear weapons. According to the report, North Korea may be intentionally trying to “deceive the U.S.” by continuing these efforts in secret facilities.

The rhetoric issued by North Korea following the Pompeo meetings showed a return to sharp, provocative language, dangling the possibility of war if the U.S. continued to make demands.

“The issues the U.S. side insisted on at the talks are all roots of troubles, which the previous administrations also had insisted on to disrupt the dialogue processes, stoke the distrust and increase the danger of war,” the statement read. “The U.S. is fatally mistaken if it went to the extent of regarding that the DPRK would be compelled to accept, out of its patience, the demands reflecting its gangster-like mindset.”

Despite the NBC report and North Korea’s statement, Pompeo still claimed the rogue nation is committed to dismantling its nuclear program.

“I was there for the event,” Pompeo said Sunday. “I know actually what precisely took place. When we spoke to them about the scope of denuclearization, they did not push back. It wasn’t my language; it was the language of Chairman Kim. He committed to complete denuclearization.