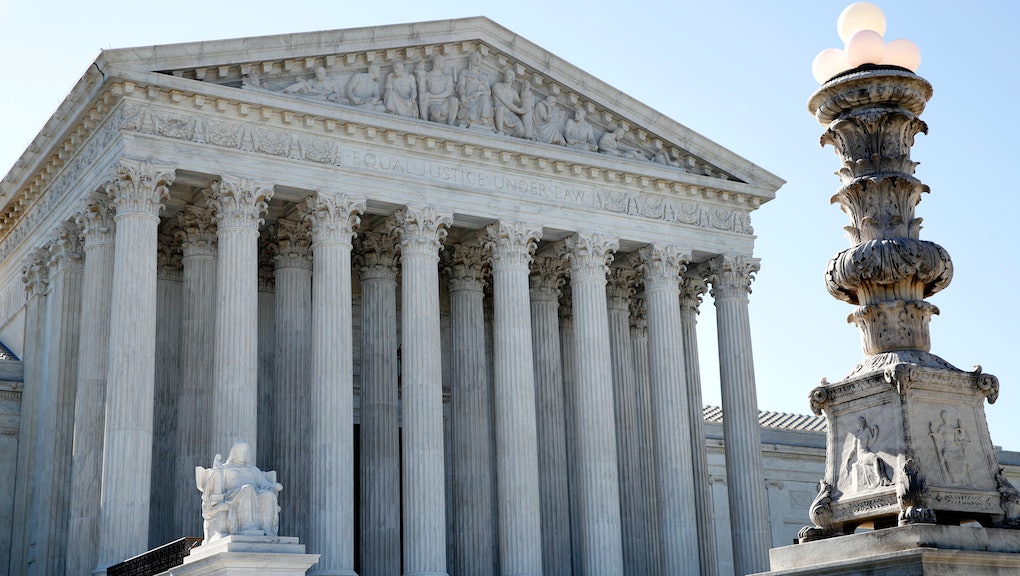 The 14th amendment turns 150 today, but its legacy in Supreme Court rulings is now uncertain

President Donald Trump is set to announce his Supreme Court nominee Monday — and whomever he chooses will play a major role in deciding how an 150-year old pillar of the Constitution will be upheld.

In addition to Trump’s consequential announcement, Monday marks the 150th anniversary of the ratification of the 14th Amendment, which has been responsible for reshaping the face of civil rights in America through such key rulings as Brown v. Board of Education, Roe v. Wade and Obergefell v. Hodges.

With Trump’s conservative Supreme Court pick capable of changing the court’s makeup, however, the future of this 150-year-old amendment may hang in the balance.

What is the 14th Amendment?

Ratified on July 9, 1868, the 14th Amendment granted citizenship to “all persons born or naturalized in the United States” and held that no state could make or enforce a law that violated a citizen’s “privileges or immunities.”

“Nor shall any state deprive any person of life, liberty or property without due process of law; nor deny to any person within its jurisdiction the equal protection of the laws,” it reads.

The amendment, passed in the wake of the Civil War, was aimed at conferring citizenship and its associated rights to African-Americans. It also protected individual rights from state interference, as postbellum Confederate states sought to restrict African-Americans’ rights to property, free speech and more.

Perhaps most consequential in the 14th Amendment are the due process and equal protection clauses, which have been used to prohibit discrimination and ensure fundamental rights — like the right to privacy — that aren’t specifically enshrined elsewhere in the Constitution.

How has the 14th Amendment been interpreted?

Due to its broad nature, the 14th Amendment has been read in ways that have both helped and hindered Americans’ rights.

During the first few decades following its ratification, many major rulings concerning the 14th Amendment were often to the detriment of marginalized Americans. The Supreme Court ruling in 1884’s Elk v. Wilkins, for instance, determined taxpaying American Indians could not vote or claim citizenship because they had not been formally naturalized.

Perhaps most notably, the 14th Amendment was used to establish the “separate but equal doctrine” in 1986’s Plessy v. Ferguson that would be used as the basis for racial segregation. In this case, the Supreme Court ruled the 14th Amendment applied only to legal equality rather than social equality.

“If one race be inferior to the other socially, the Constitution of the United States cannot put them upon the same plane,” Associate Justice Henry Billings Brown wrote for the majority.

It wasn’t until 1954 that Plessy v. Ferguson was overturned with Brown v. Board of Education of Topeka, which determined that “separate but equal” policies violated the 14th Amendment’s equal protection clause. The 14th Amendment also helped secure victories during the Civil Rights movement: By giving Congress power to enforce the amendment, it led to the passage of such legislation as the Civil Rights Act of 1964 and Voting Rights Act of 1965.

Since Brown v. Board of Education, the Supreme Court has often used the 14th Amendment to expand, rather than restrict, Americans’ rights under the law. Loving v. Virginia used the equal protection and due process clauses to legalize interracial marriage in 1967, while 1971’s Eisenstadt v. Baird cited the equal protection clause in allowing unmarried Americans to use contraception. And in 2015, the Supreme Court held in Obergefell v. Hodges that the 14th Amendment “guarantees the right to marry as one of the fundamental liberties it protects.”

In 1965, the Supreme Court ruled there is a constitutional right to privacy protected by the 14th Amendment’s due process clause in Griswold v. Connecticut, which concerned a couple’s right to receive counseling about contraception. The Griswold ruling and the right to privacy has been applied to other controversial cases, including 2003’s Lawrence v. Texas, which overturned a Texas anti-sodomy law; 1977’s Carey v. Population Services International, which allowed minors to obtain contraception; and, most notably, 1973’s Roe v. Wade, which recognized the right to an abortion.

The 14th Amendment has fallen short in areas like felon voting rights. The Supreme Court has interpreted that the amendment — which guarantees voting rights “except for participation in rebellion or other crime” — allows for the disenfranchisement of felons on the state level.

The future of the 14th Amendment

Trump’s impending Supreme Court pick, however, could skew further to the right, potentially putting into question the broad way in which the 14th Amendment has been able to expand rights. One Supreme Court contender, Amy Coney Barrett, wrote in a law review article that the high court’s ruling in Brown v. Board of Education was “inconsistent with the Constitution’s original public meaning,” though she noted overturning it was “extraordinarily unlikely.”

Trump himself has previously vowed to appoint judges that would overturn Roe v. Wade.

“Even with his unpredictability on matters of race and equality, Justice Kennedy gave us a reason to hope. To make our arguments. To expect that he might be persuaded to realize the Constitution’s promise,” Sherrilyn Ifill, president and director-counsel of the NAACP’s Legal Defense Fund, wrote in an op-ed for Politico.

“And now that Justice Kennedy has announced his retirement and Donald Trump is poised to nominate his replacement, it is not an overstatement to say that everything [former NAACP LDF chairman William] Coleman, myself and the justice himself believed in hangs in the balance,” Ifill continued.

The 14th Amendment could also impact a number of political issues that may find their way to the Supreme Court. In addition to abortion and LGBTQ rights, the 14th Amendment has been cited in lawsuits concerning HIV discrimination in the military, affirmative action in college admissions and the Trump administration’s attempt to put a citizenship question on the 2020 census.

Myrna Pérez, Deputy Director of the Democracy Program at the Brennan Center for Justice, predicted in an interview that the 14th and 15th Amendments will “increase in relevance” with regard to voting rights, describing the 14th amendment as “one of a number of really important protections for equal access to the ballot box.” The 14th amendment has been mentioned in legal arguments against both partisan and racial gerrymandering as well as voter ID laws.

The 14th Amendment “has been the foundation of our ongoing efforts to make America a more inclusive nation of equal opportunities and responsibilities,” former President Bill Clinton wrote on Twitter on Monday. “It’s a cornerstone of our extraordinary economic success, social cohesion and political influence around the world.

“In spite of the benefits equal protection has brought to all of us, it is under relentless attack today,” Clinton added. “We have to fight to protect and strengthen it. Our children’s future depends on our resolve.”