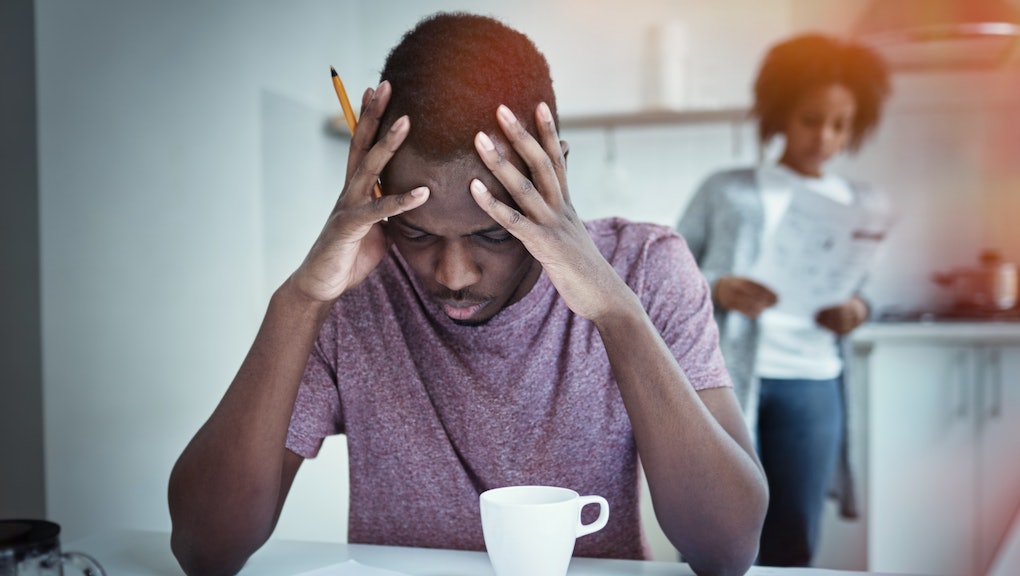 Why is it more difficult for men to change their names after marriage?

When Kate and Matt got married in October 2015, they both decided to change their names. They each adopted Kate’s last name as their middle name, and took Matt’s surname, Lambros, as their last name. The process began in January 2016, when the couple compiled all their paperwork and stopped by each government agency in their home state of New York together. It was surprisingly painless — until they got to the Department of Motor Vehicles.

“We went to the DMV with our new Social Security cards and our marriage certificate. Kate was immediately accepted,” Matt said. “I did the exact same thing, same paperwork, but they said I needed more paperwork. I said, ‘I just got married, and I’m only changing my middle name. My wife here just did it.’ And they said, ‘Well, you’re a man.’”

Matt pressed the DMV employee, who told him he’d need a court order and would have to publish the name change in a newspaper. When Matt asked more questions, the worker paused the conversation to get his manager. “A supervisor was like, ‘No you can’t do it, because you’re a man. Men don’t change their names when they get married.’”

It took four trips to the DMV, holding around 15 points of identification, until Matt successfully changed his license. “Each time, they seemed very baffled at my choice,” he said. And the Lambros’ experience wasn’t a one-off, Matt says. “Two of my male friends, who both live in New York City, also tried to change their middle names, and had the exact same problems,” he said. “One of them had to go to court and get a court order to change his.”

“Men don’t change their names when they get married.”

Married men battling government employees, spending extra hours trudging to agencies and even going to court in a liberal city like New York? Is it still so shocking for men to change their names after marriage?

The process of changing one’s name varies by the state and by the reason for the change, according to Jake Wolff, the cofounder of HitchSwitch, a company that assists with the process of changing one’s name after marriage. “The reason why we cater to married couples is that, once someone gets married, it’s the legal document that allows them to change their name,” Wolff said in a phone interview. “If you want to change your name from Kaitlin to Caitlin, you’d have to go to court and get a name-change order. But with marriage, the marriage certificate is the legal document that allows you to make the change.”

Wolff was not hugely surprised that Matt Lambros had a difficult time.

“The whole concept of HitchSwitch is to streamline and simplify. We’re working to make it just ‘one click,’” he said of the process. “The driver’s license is still the one hiccup where an in-person visit is required.” So that’s issue No. 1 for Matt and Kate: The driver’s license step actually requires dealing with humans, who are prone to error and judgment.

Regarding the gender discrimination, Wolff said that indeed, “around 97% of our clients are female, but of the 3% to 4% who are male, the process is easier now.” He reported that since same-sex marriage became the law of the land in 2015, most states’ marriage licenses now have lines for “party A” and “party B” as opposed to “bride name” and “groom name.” That represents a significant change from the turn of the millennium. A University of Pennsylvania scholar writing about the subject of men changing their names after marriage back in the Journal of Constitutional Law in 2002 noted, “In most states, men who want to change their name upon marriage must go through the formal statutory name change proceeding ... going through the regular name change proceeding is, at the very least, a hassle, and at the very most, an impossibility.”

Kate and Matt got married in 2015, so it’s possible that government officials were still adapting to the changes in culture and changes in law, making it issue No. 2.

But Matt’s case could also be the rare case of straight men experiencing discrimination. In consulting with a handful of men in same-sex couples who changed their names after marriage, none of them experienced the same difficulties as Matt. “I mean, you had to go in person and it took about an hour at each place, but the process felt like any other transaction at one of these offices,” Brendan, who got married in New Jersey in 2014 and asked to keep his last name private, said. “The employee at the Social Security office was actually rather friendly and joked I wouldn’t have to change anything I monogrammed because my maiden and married last names both started with G.”

Why did the DMV employee suggest Matt would need to go to court and publish news of the change in a newspaper? Because that’s the process for people changing their names outside marriage, according to Hannah Walker, an attorney with Sylvia Rivera Law Project, a legal-aid organization dedicated to issues of gender identity. There, she often assists trans people in the name-changing process.

“I draft the petition, I gather all the paperwork, and if they have a criminal history, I get their rap sheet,” Walker said. “Once we have the petition drafted, we get a court date. In New York City, it depends on the judge you get, but some won’t require [the client] to go before them in order to process your petition. Then you have to publish the name change in a newspaper, unless you ask for a waiver of publication. That’s to give notice to the community that you are changing your name.” The New York state tradition of publishing your name change in a newspaper dates back to legislation from the 1850s, Walker said, though other states have similar requirements.

“We still sometimes run into transphobic city clerks or city officers. I definitely think for cis women to change their names, no one bats an eye,” she said.

So what happened with Matt and Kate Lambros? Though they traveled to the DMV again and again (four times in all), and worked with different employees each time, they kept winding up with the same supervisor, Matt said. One time they happened upon a new supervisor, and Matt’s license was processed immediately. It could be less the city, state or federal rules, and more just that one confused government employee could hold up the whole process.

For the record, the New York state DMV website officially states that people looking to change their name after marriage must bring a marriage certificate. It’s also oddly specific about what kind of changes you can make to your name after marriage: “Regardless of the genders of you and your spouse, if your marriage certificate shows both your spouse’s surname and your former surname, you may change your middle name to your former surname; choose a different middle name; and change your surname to your spouse’s surname.” Couples who want to, say, hyphenate or create a new surname together are not covered by this explanation.

How can you avoid the headache? By preparing as much as possible, gathering every single kind of identifying paperwork you possess, preparing for the costs (fees depend on the state, but for Matt and Kate in New York City, a new driver’s license was $80, a new passport $165, a new Social Security card free; HitchSwitch packages vary depending on the effort they put forth on your behalf but begin at $29) and researching how your friends and colleagues have experienced the process in your state. The most important item to gather is your patience. When it comes to government-related paperwork, things are rarely speedy.