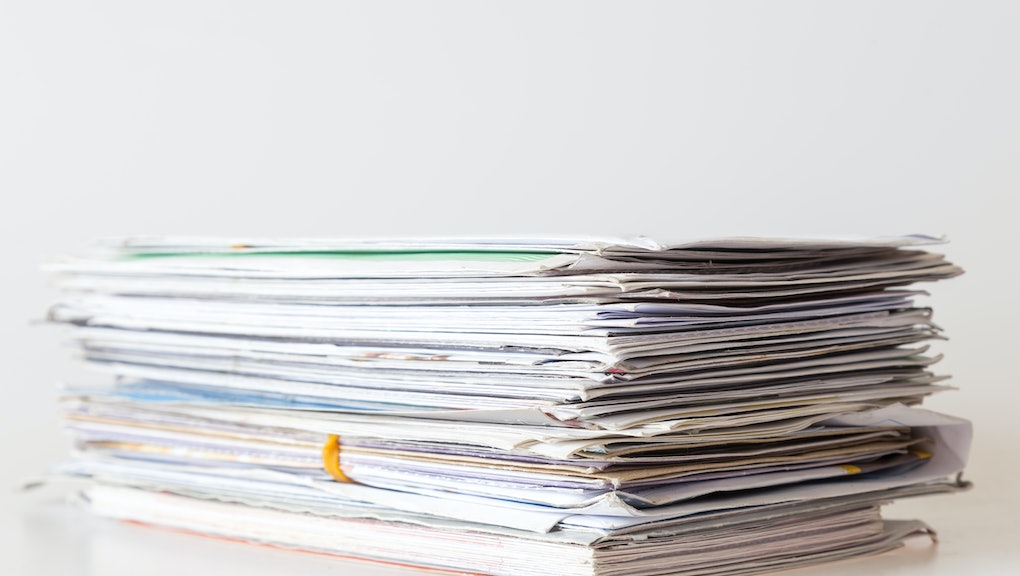 If you’re like me, and the numbers suggest you are, you have a money habit so shameful that it revisits you in the darkest times. You’re trying to fall asleep but then you remember it and start running numbers in your head; or worse, you’re out with friends enjoying a beautiful afternoon and then a little voice appears in your ear, reminding you that you don’t get to have a beautiful afternoon. We hide these habits or one-off mistakes from our friends and even significant others, but it’s hardest to hide them from ourselves.

Here’s mine: I never pay my medical bills.

They live in a beige linen tote bag stuffed under my dresser next to the blue Ikea bags I use for laundry. I never even open the bills. Of course, I cough up my card for co-pays or prescriptions in person, and I’m a freelancer who pays for her own insurance via an automatic bill pay. But it’s everything in the middle, all the exams and cultures and procedures, that don’t get paid. And what’s worse? Nothing ever happens. It feels like my negligence is never punished.

The deeply weird thing is, I have the money to pay them off. Not all at once, but I could set up payment plans, or dip into savings. There is at least one four-figure bill from the time I got stitches after falling off a bike during the summer of 2015, but otherwise most bills are under $250. The other weird thing is that I’m pretty good at paying all my other bills. Rent, utilities, credit card, cell phone and insurance bills are all automatically deducted from my checking account. It’s the medical ones I can’t abide.

Why do I do this, and what are the consequences and how do I stop?

I could spend a few hours in a therapist’s office figuring that one out, but then I still would have to pay the bill off — so I asked the experts instead.

When I confessed my habit to Mark Galvin, who founded MyMedicalShopper, he laughed out loud over the phone. “Believe me, you’re not alone. That’s almost standard,” he said. “That’s why they try to collect everything from you in the office before you leave. Today, 50% of hospitals’ bad debt is from fully insured patients.” Galvin’s company allows customers to choose and compare medical services based on price.

Psychologist Brad Klontz helps clients with financial denial, which is what he says I’m dealing with. “Our stress goes up and avoidance goes up the less we feel we have the knowledge or confidence in our ability to cope with the problem,” he explained. In this case, I am not confident in my ability to navigate the world of health insurance — I always feel like I’m being taken advantage of. Which isn’t surprising, he said, because dealing with the American health care system is absolutely maddening.

“In every other market, you made a commitment. When you drove the car off the lot, or when you placed your order on Amazon, you knew what the cost was going to be,” Galvin said. “The basis for all contract law is you have to have two parties, and they have to have a meeting of the minds. You agree to something. In health care, that doesn’t happen. You might not even know what they’re going to do to you or charge you for.”

Every time I open my tiny urban mail slot and spot a medical bill, the envelope is housing some creepy surprise. Was that urinalysis $9, or $90, or $900? Am I meant to fight back?

I once received a bill for my “well-woman visit,” or the gynecological exam that women are encouraged to have annually. I was charged for each aspect of the exam, including the STD tests — even though I was pretty sure Obamacare resolved that well-woman visits were covered entirely by insurance. There was one final insult: my doctor charged $5 for the lubricant she used before she inserted tools inside me. Talk about a violation. I felt disgusted, angry, and worst of all, stupid.

My doctor charged $5 for the lubricant she used before she inserted tools inside me.

Klontz likens opening a medical bill to spinning a roulette wheel, but he has another metaphor for the experience. “The snakebite bias: If you stick your hand in a hole and get bitten by a snake, you are afraid to stick your hand in the hole again. One bill may have overwhelmed you, and you don’t want that experience again.” Who wants to feel stupid, poor, cheap and angry? Not me. So my solution? I don’t open them.

But surely there must be consequences. If I didn’t pay rent, I’d be evicted; if I didn’t make my car payments, the vehicle would be repossessed. Medical debt’s consequences are less tangible.

“It can trash your credit rating. You’re probably getting badgered with phone calls from collection agencies, or you don’t answer 800 numbers when you see them,” Galvin said. “You might get some collections activities in the mail. Eventually, there will be bad marks on your credit report.” While your credit score is important, it’s not top of mind for me right now, especially because I’m not currently trying to buy or rent a home. And on the rare occasion I’ve opened one of the envelopes from a debt collector, I noticed interest wasn’t being added to the original bill.

I worry, though, that my delinquency impacts the health care costs of others: that if I don’t pay, they raise the rates on everyone to make up for me and people like me.

“If you’re insured and you don’t pay, the loss is on the provider. It doesn’t impact your peers,” Galvin reassured me. “There is some claim that hospitals, specifically, raise the rates on those who pay to cover the costs of those who don’t. There’s some truth to that, but it’s way over-simplified by the hospitals.”

It seems that the person I’m most screwing over is myself. It’s my stress level at the sight of that overstuffed tote bag, and my financial future, that I have to deal with. So I do. A week ago, I poured a tall glass of water, cranked up the AC, and sat down with the tote bag and my debit card. After moving some money over from my savings account, I opened the envelopes one by one and paid, and paid, and paid. Most were under $100, and one was exactly $8.04. I could, indeed, afford to pay them off in an afternoon, for which I am extremely lucky. After about an hour of this, I realized that about 90% of the envelopes were different notices for the same few charges. I only had to pay off a few to fly through the entire pile.

I had been afraid to call the debt collectors — then they’d know I’m a real person — but the bored voices on the other end of the line didn’t reprimand me. They sounded bored. They do this all day.

And when I was done? I felt like I could lift a car. My ears started ringing like I had just bungee-jumped, or spoken to a crowd of thousands. I had conquered a fear, and fixed one overwhelming aspect of my finances in about an hour. Now I can return to just fearing illness itself, instead of the mail that follows.

Do you have a horrible money habit keeping you awake at night? Are you struggling to figure out what it means, and how to solve it? Send your situation to moneyconfession@mic.com (we can keep your identity anonymous!) and we can work it out in a future column of Money Confessions.