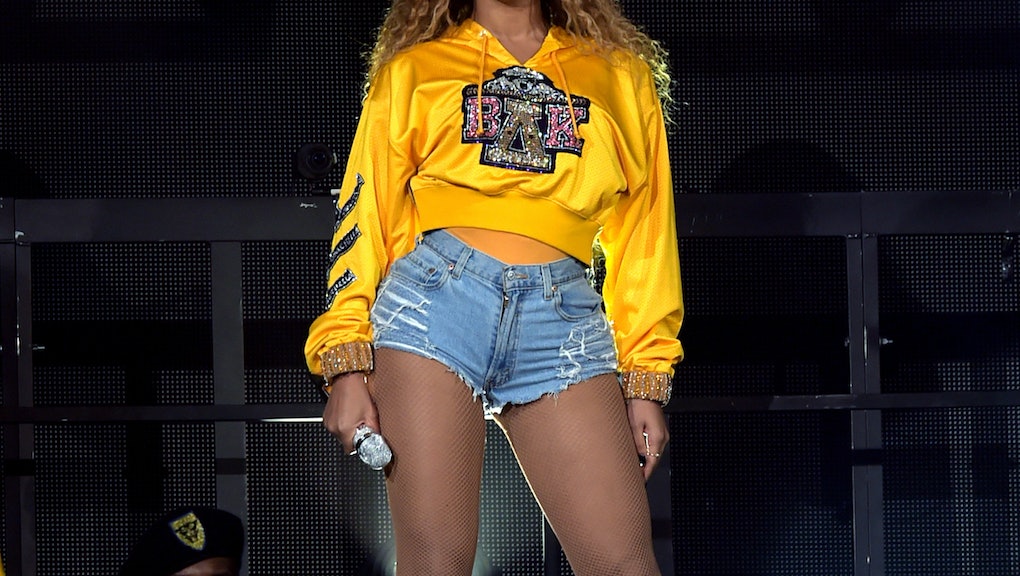 The singer wore a yellow hoodie bearing the Greek letters of a newly imagined sorority, Beta Delta Kappa, for her first set. During weekend two of the festival — which takes place annually in Indio, California — Bey and her marching band wore a pink version of the same sweatshirt.

Both iconic looks were created by French designer Olivier Rousteing, creative director of fashion brand Balmain. Now, Bey and Rousteing are giving fans a chance to own items from the Beychella wardrobe while giving back to the HBCUs that inspired the clothes and performances.

A special Beyoncé x Balmain collection will premiere Friday at Balmain’s flagship store in Paris, with the items slated to go on sale Saturday at Balmain.com and Beyonce.com. The collaboration includes versions of the yellow and pink hoodies Bey wore at Coachella plus a black T-shirt featuring the same Greek letters, according to Vogue. The shirt is marked at $290 and the sweatshirts range from $550 to $1,790.

“For me, working with Beyoncé, it’s more than only music,” Rousteing told Vogue. “It’s about history, working with a woman that’s going to be part of the history and has made her own revolution, not only in music, not only in fashion.”

Proceeds from the collection will go to the United Negro College Fund, a philanthropic organization that awards 10,000 scholarships a year to students at 37 HBCUs, including Dillard University, Fisk University and Clark Atlanta University.

“The new collection’s soul and spirit carry HBCU and UNCF DNA,” a Tuesday blog post on the UNCF website reads.

The collection is part of a larger push by Beyoncé to award scholarships to students at black colleges. On April 16 — two days after her history-making headlining set at Coachella — the singer announced the Homecoming Scholars awards program, which will award four grants of $25,000 each to four HBCUs: Xavier University, Wilberforce University, Tuskegee University and Bethune-Cookman University.

In 2017, Bey created the Formation Scholars awards program for current or incoming women students at two HBCUs, Howard University and Spelman College, as well as the Berklee College of Music and Parsons School of Design.

With this new philanthropy-focused fashion line, Bey and Rousteing are not only bringing the signature style of HBCUs to the world stage, but ensuring the schools reap the benefits, too.