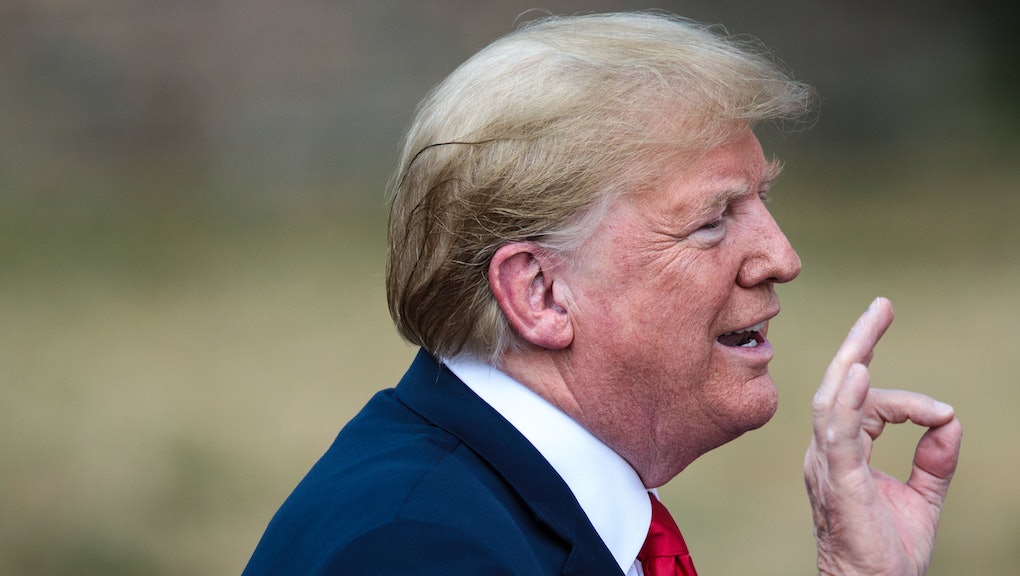 President Donald Trump on Saturday blamed former President Barack Obama for Russia’s election interference, tweeting the day after a grand jury indicted a dozen Kremlin intelligence officials that his predecessor should’ve done “something about it.”

“The stories you heard about the 12 Russians yesterday took place during the Obama Administration, not the Trump Administration,” the president tweeted. “Why didn’t they do something about it, especially when it was reported that President Obama was informed by the FBI in September, before the Election?”

The remark — part of a string of tweets related to the Russia probe — came on the heels of a new wave of indictments against Russian intelligence operatives accused of hacking Hillary Clinton and the Democrats and releasing sensitive stolen documents in an effort to damage her 2016 presidential campaign.

While Friday’s indictments did not include official allegations of misconduct by any Americans, the charges seemed to implicate Trump ally Roger Stone, who reportedly communicated with a fictitious online persona created by the Russian conspirators, and WikiLeaks — the organization Trump repeatedly said he loved in 2016.

It also raised further questions about possible coordination between the Trump campaign and the Kremlin, as the conspirators allegedly began a spear-phishing offensive against Clinton and members of her team the same day Trump publicly called on Russia to find his opponent’s missing emails — a comment members of Trump’s team have dismissed as a joke.

Regardless, Trump and his allies have attempted to cast the new charges, which Deputy Attorney General Rod Rosenstein announced Friday, as a win.

Trump’s suggestion that the Obama administration didn’t do anything about Russia’s meddling efforts isn’t exactly true. During the 2016 campaign, the administration warned Moscow about its malicious moves and publicly blamed the country for the hacking and release of stolen emails meant to hurt Clinton’s presidential bid. After the election, Obama also expelled Russian diplomats from the United States and hit Russia with sanctions — sanctions Michael Flynn, Trump’s former national security adviser, allegedly said would be “ripped up.”

Still, the Obama administration has faced scrutiny for not doing enough to stop the Russians, something it is expected to be criticized for in an upcoming Senate Intelligence Committee report.

“It is the hardest thing about my entire time in government to defend,” a former senior Obama administration official involved in White House deliberations on Russia told the Washington Post in 2017. “I feel like we sort of choked.”

Of course, Trump’s criticism of the Obama administration rings hollow, as he has repeatedly cast doubt on Russia’s election interference and has appeared reluctant to hold Russian President Vladimir Putin accountable, instead praising him and seeking warmer relations with Moscow.

“He’s been very nice to me the times I’ve met him,” Trump said of Putin at an impromptu news conference Thursday after the NATO summit. “I’ve been nice to him. He’s a competitor. You know, somebody was saying, ‘Is he an enemy?’ No, he’s not my enemy. ’Is he a friend?’ No, I don’t know him well enough. But the couple of times that I’ve gotten to meet him, we got along very well. You saw that.”

Those comments — and another set of remarks Friday in which he again called the Mueller probe a “witch hunt” — came after he’d already been briefed by Rosenstein about the coming indictments.

Trump has also declined to fault Putin for Russia’s invasion of Crimea in 2014, instead blaming Obama and saying his predecessor “lost” the country.

Trump went after CNN on Saturday morning over its coverage of the new indictments, which Rosenstein announced just days before the president is set to meet Putin in a one-on-one session in Helsinki.

In one of his more inscrutable tweets Saturday, he also raised questions about a “Deep State” plot involving the FBI.

Trump is spending the weekend at his golf club in Scotland before meeting with Putin on Monday — a summit Democrats called on Trump to cancel in the wake of Friday’s indictments. But the meeting will go on, the White House said, and Trump will spend the next two days taking “meetings” and playing golf.

“My primary form of exercise!” he tweeted Saturday.