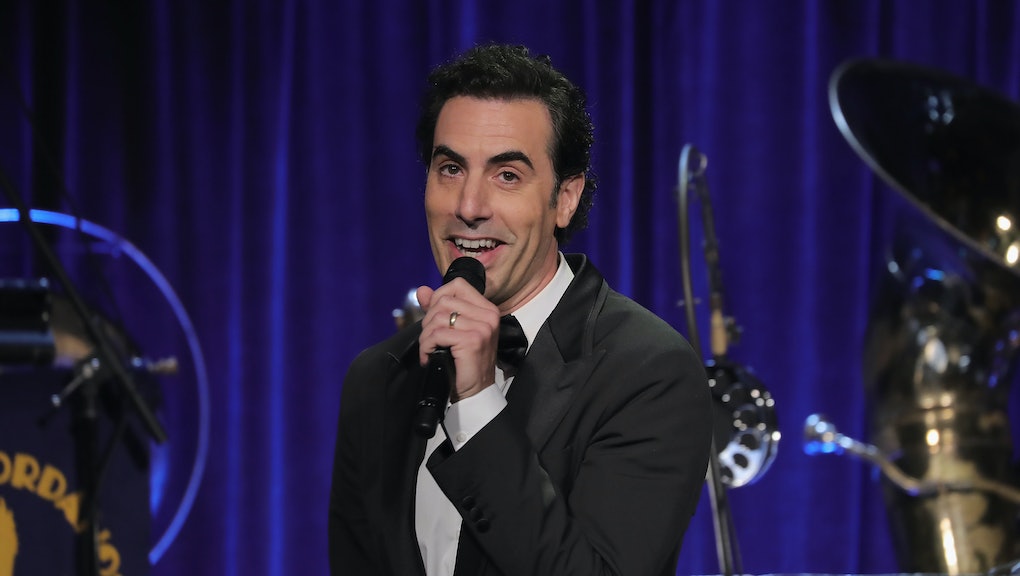 The most cringeworthy — and snooze-worthy — moments from Sacha Baron Cohen’s ‘Who Is America?’

Comedian Sacha Baron Cohen’s new Showtime series Who is America? premiered on Sunday night, to mixed reviews. The new series has the Borat star up to his old tricks, dressing up in convincing costumes and duping unsuspecting Americans — some famous, some not — into interviews in which Cohen pushes the boundaries of etiquette, acceptability or morality itself.

Anyone who’s familiar with Cohen’s past work knows that watching his comedy can be an exercise in masochism — the audience often squirms the most as Cohen, hidden behind a persona, either becomes more and more outlandish or empowers his guests to do that themselves. The first episode of his new show was no different. It had Cohen disguising himself as four separate characters for four different segments. Here’s the most cringeworthy part of Sunday night’s debut — and what barely made us sweat.

Most cringeworthy: Cohen talks to the gun guys

The segment in which Cohen pretends to be an artist who works with feces (no, you didn’t misread that) was pretty hard to watch, but this one was disturbingly revealing. In it, Cohen plays Erran Morad, an “Israeli terrorism expert” who says he has come to the U.S. to promote a program to train and arm children, called “Kinder-Guardians.”

In it, the fake Morad gets very real politicians like Rep. Joe Wilson (R-S.C.), former Senate Majority Leader Trent Lott (R-Miss.) and Rep. Dana Rohrabacher (R-Calif.) to endorse a program to arm children as young as 4 years old. “A 3-year-old cannot defend itself from a assault rifle by throwing a Hello Kitty pencil case at it,” Wilson says in the clip. “Our founding fathers did not put an age limit on the Second Amendment.” And Cohen also got gun advocate Philip Van Cleave of the Virginia Citizens Defense League to help make an “educational video” teaching children how to aim firearms hidden in stuffed animals, even singing a troubling song about how to direct their aim toward the head and “not the toes, not the toes.”

But perhaps even more disturbing than these figures’ willingness to support putting guns in the hands of toddlers, was a part of the segment with gun lobbyist Larry Pratt, who at one point laughs uproariously when Cohen “jokes” that you can’t rape your own wife. Oh, and he also seems to suggest that Muslims deserve to be shot. It’s hard to watch, to say the least.

In the least cringe-inducing segment of the Who Is America? premiere, Cohen, disguised as Billy Wayne Ruddick Jr. — an Alex Jones-style “journalist” who blames his health problems on “Obamacare” — interviewed former Democratic presidential candidate Sen. Bernie Sanders (D-Vt.). While Cohen, donning a strange Southern accent, adamantly suggests moving all Americans to the 1%, Sanders just sort of gives him the side-eye and sticks to his talking points about economic inequality.

Maybe the Ruddick character isn’t developed enough — or maybe Sanders is hard to rattle — but this one was the least painful moment of the show’s first episode. It’s pleasant to watch a segment that doesn’t reveal the guest to be a real-life monster or a total rube, but it might not make for compelling TV.