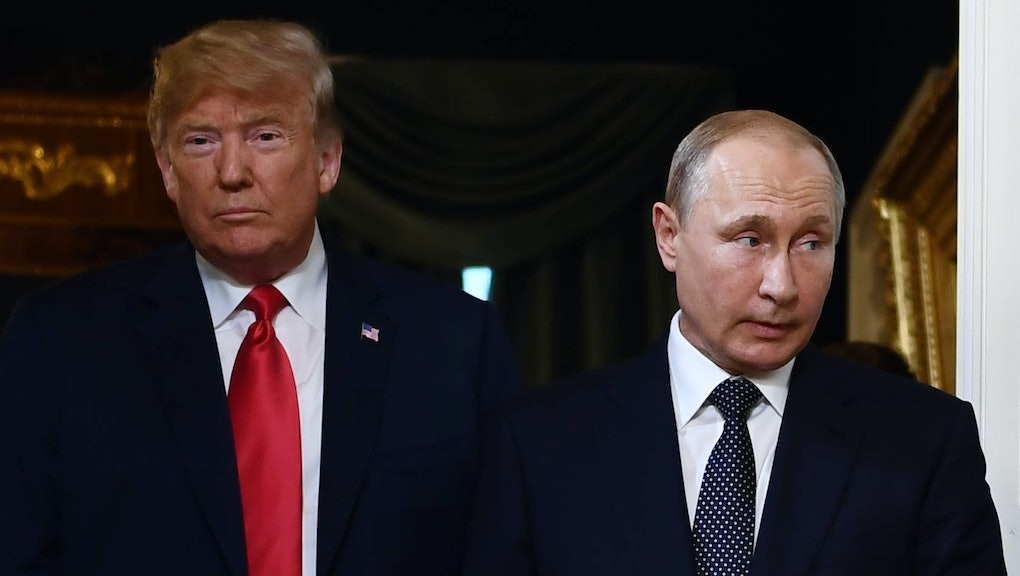 Enough with the “Trump and Putin are gay” jokes

Back in April, sketch actor and podcast host Bowen Yang spoke for all of us who are bored out of our minds with the long-running joke that Donald Trump and Vladimir Putin are gay lovers.

“My issue is always that it’s just laziness,” Yang explained to Mic. “You can do better than this. You can make a better joke than shitting on some group of people. You are a better comedian than that. Hopefully things like this shift the conversation in a positive way.”

Unfortunately, a lot of comedians are not better than that. Worse, there are now media outlets embarrassing themselves by jumping on the bandwagon of a tired joke that needs to be put in rice. On Monday, following Trump’s summit with the Russian president, the New York Times tweeted out an animated video titled Trump and Putin: A Love Story.

As you can see from the clip, which was originally published online in June, Trump and Putin are gay. Get it? Being gay is so funny. Ha, ha, and ha!

It’s on par with the “cock holster” joke that Stephen Colbert made on The Late Show in 2017. I like Stephen Colbert very much, but, he, too, is better than this. Though he is my favorite celebrity Catholic (yes, even over the Pope) and I find him brilliant, he is, ultimately, a comedian and late-night talk show host. My expectations are for him aren’t as high as they are for a publication like the New York Times.

I may increasingly find myself cursing out the Times’ op-ed section depending on the contributor that day, but nevertheless, I expect it to be better and smarter than this video. The Times’ tweet may not have physically harmed any of us, but it’s harmful to queer people all the same. It’s simply unnecessary.

Trump’s affinity for Putin is bizarre; however, if you find the notion of them having anatomical sword fights inherently humorous, that’s a very telling statement about what you make of homosexuality. If you find the idea of Trump and Putin being involved sexually and/or romantically funny, you have to think being gay is worthy of ridicule. Whether intentional or not, it provides fodder for homophobes.

Queer and straight comedians alike understand all of this, hence why the joke bothered them.

You don’t need a treasure map to land on this: The animated video is homophobic. It’s stale and it’s stupid. Find other ways to mock Donald Trump. There’s a lot of material available. Here, let me help.

I mean, he reads like it hurts. He is a lazy thot. He cannot spell worth a damn. His wife doesn’t seem to like him. His wine makes you appreciate the sweet taste of NyQuil. He looks like a sweet potato had a baby with an angry duck.

I could go on, but you get it. If you cannot find a nonhomophobic reason to clown Trump, you’re not meant to crack jokes. As for mocking Vladimir Putin, consider this: His critics tend to go mysteriously missing. So when it comes to cracking jokes on him ... I’m good luv, as the Internet says. I don’t want those problems. No shade, comrade.

But if you are bold enough to mock the despot who loves taking shirtless pictures, use your imagination. For the umpteenth time, there is nothing funny about being gay. Why do any of us have to explain this in 2018? Why do we have to convey this to the New York Times of all publications?

We should be far beyond trying to humiliate a man by suggesting he is gay. There is nothing humiliating about being gay or having gay sex. If you tried it, you would know having it is a lot more fun than mocking it. Or you can just take my word and keep your ignorance to yourself. Whatever gives queer people less headaches.

If you’re incapable of being less asinine, you can always throw your phone and computer in a lake of fire.