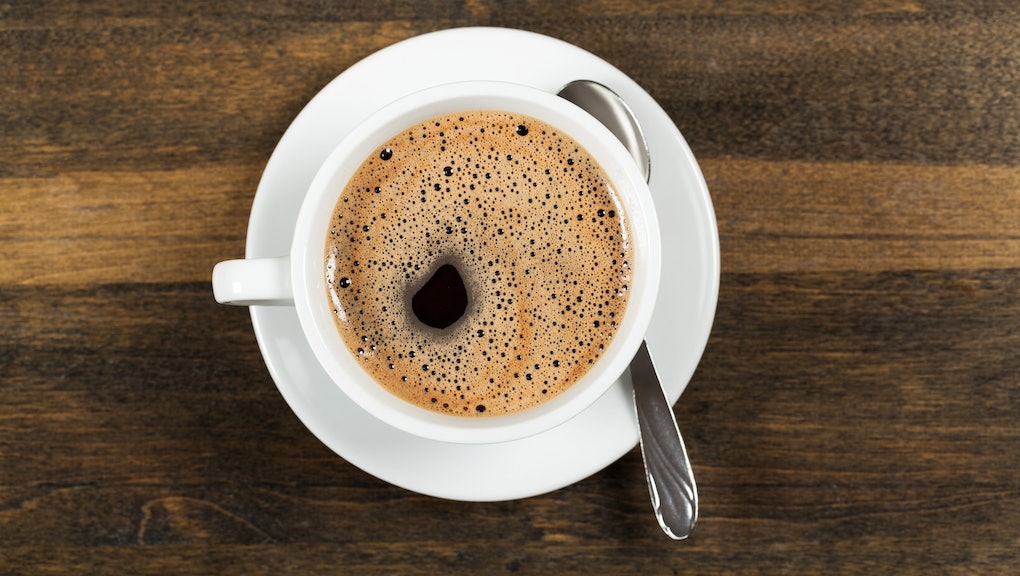 Why people are putting mushrooms in their coffee

The science on coffee is clear: The drink has some serious health benefits.

Still, in this current wellness-crazed moment there are innumerable ways to “biohack” the drink in effort to make it even better for you. It wasn’t long ago that people started putting butter in their coffee (specifically the grass-fed variety) for weight loss and mental clarity. And now, some claim that adding mushrooms to a cup of joe could have superior perks.

At the Venetian Resort in Las Vegas, chef Pete Ghione offers mushroom coffee at CR Creat, the resort’s grab-and-go cafe. For $3, guests can add a mushroom booster to their coffee, tea or smoothie order. On the menu board the supplement is described as something that “boosts immunity and liver health, increases brain health, is filled with antioxidants and aids digestion.”

Ghione, who is the executive chef and food and beverage director at the resort’s Canyon Ranch Spa, buys a supplement that has a blend of 10 different dehydrated mushrooms, made by a Finnish company called Four Sigmatic. “You can add it to anything — smoothies, tea, coffee, espresso,” Ghione said in a phone interview. “I don’t want to say it tastes like dirt, but it’s very earthy so it pairs well with something strong, like coffee or tea.”

The mushrooms come in powder form and easily dissolve into a beverage. Mushrooms on their own boast a host of nutritional wins: Certain types are incredibly rich in antioxidants, which have been found to fight conditions like heart disease, Alzheimer’s disease and even some forms of cancer. Better yet, mushrooms contain the highest source of two antioxidants called ergothioneine and glutathione, both linked to anti-aging properties. Of the coffee, Ghione said “the benefits are great,” citing both memory and immune-boosting qualities as well as a positive impact on liver function, which can be particularly useful for Vegas guests recovering from a heavy night of drinking.

Coffee’s strong flavor makes it the ideal vehicle for masking some of the mushroom’s earthiness that Ghione described. But it’s also a good choice because, for most people, coffee drinking is a daily ritual, making the process of getting mushroom’s added benefits regularly pretty simple. “It’s all about taking things that people like and making it better for them,” Ghione said. The chef acknowledged that coffee has a lot of benefits, but common habits — like adding too much sugar and dairy — add plenty of negatives, like inflammation, he said.

Research supports the mighty powers of mushrooms, and adding them to your diet could be valuable. While there aren’t enough studies on combining shrooms and coffee for maximum results, separate research has found that cordyceps, a property found in mushrooms, can provide energy, though the quantity needed to make an impact is likely greater than what’s found in a serving of mushroom coffee.

Before working at Canyon Ranch, Ghione served as a private chef, cooking for a few clients who had cancer. The opportunity encouraged him to look at food as medicine, and he’s brought the lessons with him. “I infuse a lot of ingredients that actually help your health,” he said, noting that while people are often turned off by the thought of eating “health food,” he’s able to sneak in ingredients that he knows have benefits.

As for mushroom coffee, Ghione said while it’s not the most popular item on the menu, “it’s there for the people who know about it and want it,” and sales are increasing as health-minded folk learn about it. He expects to see the ingredient pop up at coffee shops around the country. The recipe is becoming more popular in home kitchens, Ghione said, as people can purchase the supplement — some of which already has coffee in it — online.

Gwyneth Paltrow reportedly adds a mushroom supplement to her morning smoothie, and anecdotes posted online claim that combining mushrooms with coffee provides energy — without the anxiety caffeine can induce in some people.

This article was originally published on July 20, 2018