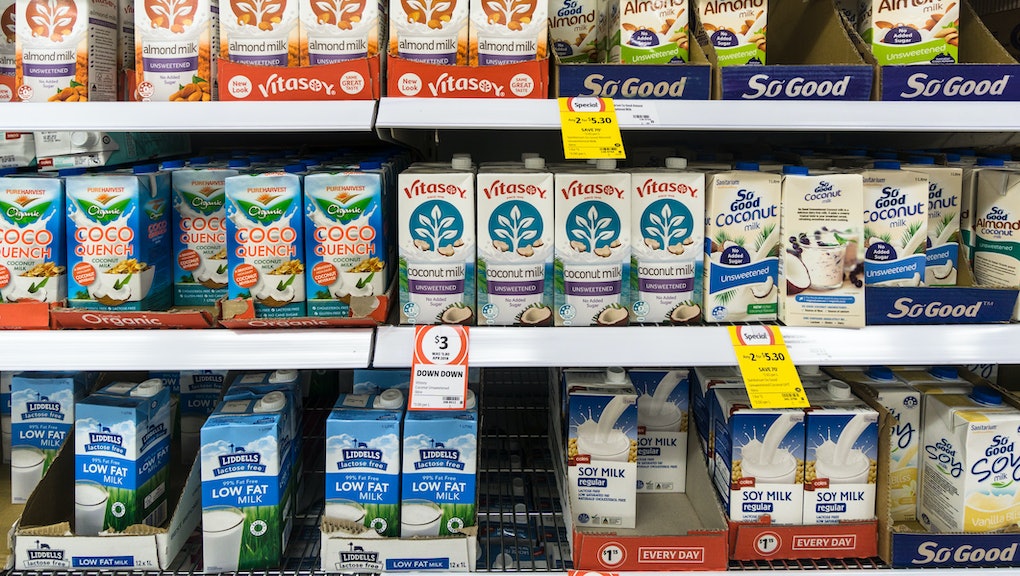 “An almond doesn’t lactate,” Food and Drug Administration commissioner Scott Gottlieb said Tuesday at the Politico Pro Summit. If the FDA decides to enforce current regulations on milk labels, you might have to start looking for your almond milk under another name.

During the summit, Gottlieb said that past application of standards for milk labels has been lacking and said the FDA intends to issue a guidance document that would enforce standards differently and solicit public comments in a year’s time.

The FDA has rarely weighed in on labels of nondairy, plant-based milk products. Gottlieb’s comments at the summit appear to be one of the first declarations of intent by the FDA to more strictly regulate guidelines on nondairy milk products.

Milk is regulated by several standards that define nutritional value and other product requirements, such as vitamin inclusion and fat content. Coconut, almond and soy milk are, of course, nondairy products and therefore don’t meet one particular standard: lacteal secretion by way of “one or more healthy cows.”

Although global dairy prices have dropped, U.S. milk sales have fallen and corporate agriculture has forced small American dairy farmers out of business. Meanwhile, sales of nondairy products like coconut and soy milk have grown nearly 61% over the last five years to reach an estimated market value of more than $2 billion.

Dairy farmers have long asked the FDA to enforce labeling regulations on nondairy products, claiming the products mislead consumers who assume the nutritional value is similar to that of actual dairy products.

Sales of nondairy products like coconut and soy milk have grown nearly 61% over the last five years to reach an estimated market value of more than $2 billion.

The American Dairy Coalition, an industry organization that focuses on dairy policy, formally launched the Protecting Milk Integrity Initiative on Tuesday in an effort to urge the FDA to refrain from labeling nondairy, plant-based products as milk. On the organization’s website, the ADC blames “dishonest branding techniques” for consumers’ apparent difficulties in selecting appropriate dairy products for dietary needs.

Michele Simon, executive director of the Plant Based Foods Association, told the New York Times in 2017 that consumers aren’t being fooled.

“All they’re trying to do is create a better alternative for people who are looking for that option,” Simon said.

The FDA has previously faced criticism over its milk labeling regulations. In April, dairy farmers Karen and Randy Sowers filed a lawsuit against the FDA after it reportedly refused to let their natural skim milk be labeled “skim milk” unless they added synthetic vitamins.

The case is ongoing; however, a federal appeals court in 2017 ruled unanimously in favor of one Florida dairy farm that produced skim milk without added vitamins, awarding them $437,000 to cover attorney fees and allowing the farm to forgo the use of “imitation” in its product’s name.

Lawsuits from nondairy, plant-based milk manufacturers have not yet been brought against the FDA, but Gottlieb seems to anticipate them.

“Invariably, we’re gonna get sued,” he said during the Politico summit. “But we do have a standard of identity and I do intend to enforce that.”