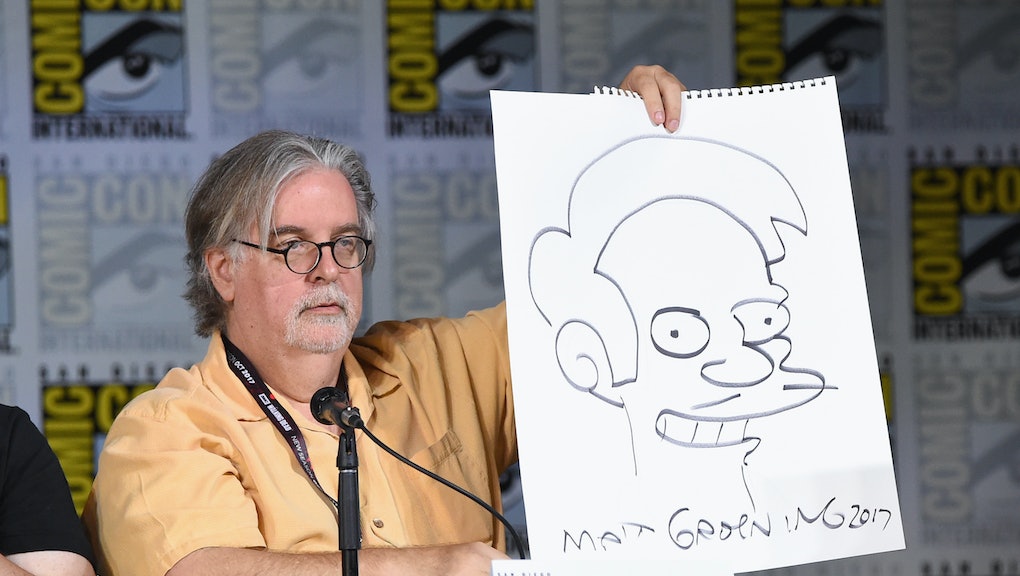 In a new interview with the New York Times published Wednesday, Simpsons creator Matt Groening seemed to indicate he still doesn’t get what the criticism of the character Apu is all about.

“Well, I love Apu,” Groening told the Times. “I love the character, and it makes me feel bad that it makes other people feel bad. But on the other hand, it’s tainted now — the conversation, there’s no nuance to the conversation now.”

Apu, a character on the show since 1990, is an Indian convenience-store owner voiced by Simpsons mainstay Hank Azaria, a white guy.

It was comedian Hari Kondabolu’s 2017 documentary, The Problem With Apu, that really brought critique of the character into the mainstream. Kondabolu, a self-described Simpsons fan, used the character as a framework for talking about the casual racism with which Hollywood treats Indian and South Asian identities.

“When people ask, ‘Why are you offended by Apu?’ I’m not offended,” Kondabolu said in a previous interview with Mic. “I’m a 35-year-old man. I don’t think a cartoon character, considering the state of the world, is going to destroy me. But there’s something interesting about him because it’s like a fossil preserved in amber, since The Simpsons have been around for so long — to see how you were viewed then and to ask why this thing is still alive.”

But the show itself hasn’t had a great response to those questions. An April episode of The Simpsons had Lisa and Marge breaking the fourth wall to lament “political correctness,” an oblique nod to the conversation around Apu.

Critics and fans saw the show’s response as disappointing. Kondabolu himself tweeted, “Wow. ‘Politically Incorrect?’ That’s the takeaway from my movie & the discussion it sparked? Man, I really loved this show. This is sad.”

Azaria, to his credit, has said he wants the show to have a thoughtful response to conversations about the character.

“I think the most important thing is we have to listen to South Asian people, Indian people, in this country when they talk about what they feel and how they think about this character and what their American experience of it has been,” Azaria said on The Late Show With Stephen Colbert in April.

But Groening, speaking to the Times, seemed to once again brush off the heartfelt criticism, suggesting it might be “the outrage of the week.”

“For a while, it was, believe it or not, kids were stealing quarters out of their mothers’ purses in order to go to the video arcade and that was going to bring down civilization,” Groening said. “No one even remembers that because that lasted a week. I think particularly right now, people feel so aggrieved and crazed and powerless that they’re picking the wrong battles.

“My guess is I agree, politically, with 99% of the things that Hari Kondabolu believes,” he added. “We just disagree on Apu. I love the character and I would hate for him to go away.”

Groening also defended the character by seeming to suggest it’s the best representation Indian-American viewers can hope for.

“I go, maybe he’s a problem, but who’s better?” he said. “Who’s a better Indian animated character in the last 30 years?”