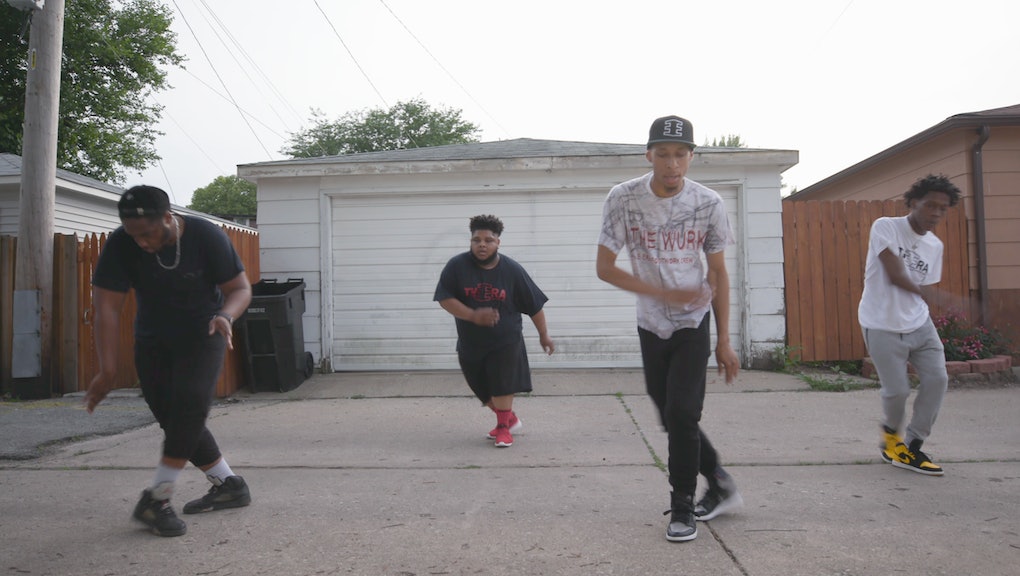 In the latest episode of Mic Dispatch, correspondent Serena Daniari begins with a story about the shortage of injectable estrogen and how it is impacting trans communities. Then, correspondent Chantel Simpson travels to Chicago to learn about The Era Footwork Crew, one of the city’s most well-known footwork dance crews.

Natasha Del Toro: Hi, I’m Natasha Del Toro, and this is Mic Dispatch. Many trans men and trans women often feel they’re navigating a medical system that doesn’t truly recognize their needs. About a third of trans people say they’ve been discriminated against at their doctor’s office, and half say they had to teach their doctor about hormone replacement therapy. Now they face another obstacle: a shortage of the generic version of injectable estrogen, which especially impacts low-income trans individuals. Our correspondent Serena Daniari shows us what one trans woman is going through.

[Emira Hajj: Just gonna set these here. Wow I’m so jittery. I always get jittery before but like, for me, you kind of have to just go for it, because if you hesitate at all, it’s like, not cute. I make sure I see a little droplet and then just, Geronimo.]

Serena Daniari (voiceover): Emira has been chemically transitioning from male to female for three years using hormone replacement therapy, also known as HRT. The medication she uses every week is injectable estrogen. Now I’m all flustered. HRT can be a life-saving source of treatment for trans individuals like me and Emira, who experience gender dysphoria, a condition in which a person experiences distress because their biological sex and gender identity are not aligned.

Daniari: It’s estimated that about 40% of trans individuals have attempted suicide.

Hajj: So I definitely noticed emotional and physical changes when I started hormone replacement therapy — the first being the excitement, the initial like, “Yes, I finally have this after I’ve been fighting so long with the world to be like, ‘This is who I am and this is what I want to be.’” You know, there was that glow. That like, first-year glow that you’re like, “Yeah. It’s me.”

Daniari (voiceover): But like many trans feminine individuals, Emira has been grappling with a chronic shortage of affordable, injectable estrogen. When she goes to the pharmacy, they don’t have her prescription available on a consistent basis. Perrigo, the manufacturer of the generic version of the drug, told us: “We are out of market due to a supply constraint from a key supplier. Our goal is to have the product back on the market later this year.” Without this drug, transgender people go back to a body they don’t feel comfortable in.

Hajj: There’s the emotional aspect of, I’m not emotionally or hormonally stable, therefore I don’t know what consequences this is going to have for me in the long-run. And then there’s the physical aspect of, you stop getting breast tenderness or your face hardens back up again or you notice the changes in your body shape, which can really increase people’s dysphoria.

Daniari: Hormone treatments play a vital role for most trans people in being able to live in a way that they feel is authentic. Laura Jacobs is a trans psychotherapist who specializes in gender issues.

Laura Jacobs, trans psychotherapist: Physically, if we suddenly do not have access, we go through a wide variety of withdrawal symptoms, to suddenly not have access to a medication that feels life-saving for them can be almost traumatic.

Daniari (voiceover): We spoke to a drug policy expert who told us injectable estrogen isn’t approved by the FDA for transitioning. Instead, it’s only approved for women in menopause. Medical professionals have to prescribe it off-label to trans women. So that means, when there isn’t enough of the drug produced to meet the demand, it’s not a priority to get it fixed. I went to Callen-Lorde, a major LGBTQ health clinic in New York City where as many as 4,000 patients could be affected by the shortage.

[Fortenberry: Anthony. So nice to meet you. Please, have a seat.]

Fortenberry: With the pharmaceutical companies, not only with pricing, but availability, there’s no accountability from any regulatory standpoint to require them to share with us the rhyme and reason behind their decisions. And so until that changes, we’re kind of stuck in this space where we have very little information to share with our patients. And you can imagine, if you’re not able to get the medication that you require — and yet there’s no information about when it might be available — how that even increases stress.

Daniari (voiceover): I can still get the brand-name version, Delestrogen, under my insurance, but it’s often too expensive for those without insurance or a sustainable income. Transgender people suffer unemployment at a rate of three times the national average.

Fortenberry: So if you were uninsured, you’re paying for brand-name estrogen out of pocket. It can be anywhere up to $70 a month. We’re hearing a lot of patients doing everything from rationing to sharing with friends to buying these medications out on the street. And as you can imagine, there are many reasons why that can be very dangerous.

Daniari (voiceover): One procedure that some trans women turn to is silicone injected directly into the body to create a more feminine figure. This can cause permanent disfigurement and even death.

Daniari (to Hajj): There’s been times where I haven’t been able to get my prescription for injectable estrogen, and sometimes the only solution for me has been to, you know, seek alternatives that aren’t really safe, like the black market or, you know, I’ve had to do silicone injections at times.

[Daniari: So can you show me your trans laboratory?]

Daniari (voiceover): For many of us, the estrogen shortage is a stark reminder that the health care system still doesn’t adequately recognize our needs or our bodies. You obviously have to go through the motions of like living in a world that doesn’t want you, first and foremost, and then operating within a medical system that treats you like a medical anomaly.

Daniari (to Hajj): Do you think that there’s a solution in the near future?

Hajj: So that in the future this won’t be a problem.

Del Toro: This is a big problem in the trans community. So we’re going to continue to follow this shortage and keep you posted on Emira’s story.

All too often, we hear depressing stories about guns, poverty and violence on Chicago’s South Side, but today we want to shine a spotlight on a more positive story. The Era Footwork Crew is inspiring inner-city youth with slick moves and a style of dance called footwork. The members of The Era say dancing provides a creative outlet and an alternative to joining gangs. So they’ve made it their mission to teach footwork to Chicago’s underserved communities.

Brandon “Chief Manny” Calhoun: We could have been in gang involvement easy, but luckily we had that footwork route to take us out of that. We could save kids’ lives ’cause a lot of our lives were saved from this.

Chantel Simpson, correspondent: I traveled to the South Side of Chicago to meet with Lightbulb, Manny, P-Top and Steelo — the members of The Era, a footwork dance crew.

Simpson, to Calhoun: How would you describe footwork to people?

Calhoun: Footwork is a music and dance that’s at a pace. So some people get confused like, “What’s the difference between footwork and hip hop?” Our dance is faster.

Simpson: One sixty beats per minute is, in many ways, the heartbeat of Chicago’s African-American community. Footwork — the dance — arose out of the house music scene in the 1980s. The dance became so popular amongst black youth that they formed battle squads, competing in basements and alleys across the city’s West and South Sides. The Era dancers are a product of this underground dance movement and they’ve traveled the globe spreading their city’s unique art form.

Jemal “P-Top” Delacruz: I feel like it’s been a blessing, if anything, because now you’re not just going to only see it in one place. So the only thing I think our job to do is to keep it alive in Chicago.

Simpson: What was it like growing up in this part of Chicago?

Calhoun: I mean, it’s so easy to be involved in a gang. When I tell you like it’s so easy, like, take us for [example]. Like, we hang out, chill and do nothing sometimes, and a lot of the times that’s how a gang will start.

Police harassment is like, one of the biggest things we face as being a black male. You know, I’m like, “Damn, I’m just walking around, going to get something to eat. You don’t know my thoughts, like, you know.”

Oliver: Right now, you know, we have one of the highest rates with unemployment, with youth in Chicago. It’s one of the highest in the country. And that’s one of the reasons why you get so much of the crime that does happen. We are establishing ourselves as leaders in the community and like that’s what these shorties need. They need to be able to look up to somebody and be like, “Oh, OK. I can be a positive light and do something like this. I don’t have to be a basketball player or a rapper. I can be a dancer.”

Simpson: This past year, Lightbulb teamed up with Drew Alt and Wills Glasspiegel, a long-time documentarian of The Era. Together, they founded a nonprofit called Open the Circle.

Wills Glasspiegel, footwork scholar and documentarian: The goal of Open the Circle is to channel resources through the arts into divested communities. It’s about saving lives and about giving people a place to deal with some of the troubled energies that are created in a city like this. What do you do with that? Where do you put that? How do you channel that into something creative, expressive, deep? Footwork.

Oliver: So this is the first-ever Chicago footwork summer camp in Chicago. It’s called Circle Up, put together by Open the Circle. We’re giving back to the shorties. Going to put the shorties on the real culture. We all started coming up with a curriculum, and eventually it turned into a whole, full summer camp that we decided to run from now until as long as we can. We plan on trying to like, to bring in new footworkers every year.

Oliver, to campers: OK, everybody face me. Everybody face us. Make a big circle. Chicago footwork is your style. Your culture. Thirty years and going. We’re going to break y’all off into small groups, right? And show y’all five basics. Five core basics to take home, OK? This move right here. Right, called the irk and jerk. The next move is called skates. We got shake and bakes. We got dribbling. The last move is called ghost.

Glasspiegel: I think when we first started to work together, they had mixed feelings about teaching, in the sense that “footwork should be something that’s hard to learn and you should really have to chase after it or it’s difficult and we’re not going to just give this up.” But I think they got to a point where they became much more comfortable teaching and they actually enjoyed teaching footwork to people of all ages and all backgrounds.

Simpson: What do you see in the future for The Era? .

Del Toro: I’m not even going to try to do those dance moves, but I’m really happy that these Chicagoans are doing it and that it’s keeping some kids out of trouble. So that’s it for this episode of Mic Dispatch. Thanks for watching.

Check out episode 2 of Mic Dispatch above — only on Facebook Watch.