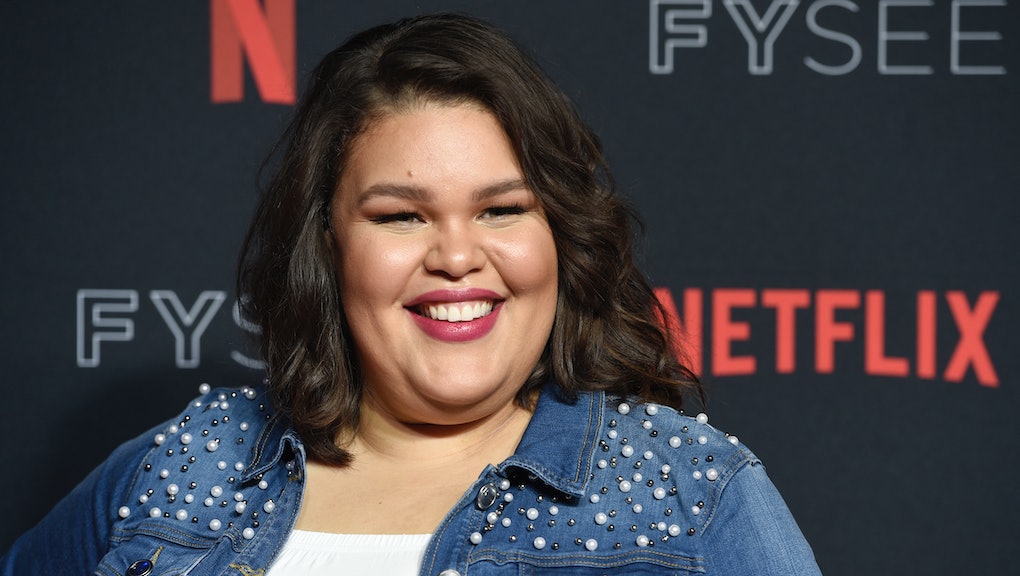 At 1 p.m. Eastern on Wednesday, I was scheduled for a phone chat with Britney Young, one of the breakout stars of Netflix’s Emmy-nominated series Glow — a 1980s-set comedy loosely based on a real-life wrestling variety show starring the “gorgeous ladies of wrestling.” At about 1:06 p.m., my phone remained silent and dark. I started to suspect that maybe I had gotten our appointment mixed up.

My phone finally rang a few minutes later, just as I was about to tap out. Young, apologetic and a bit flustered, confessed she got distracted and lost track of time watching her DVD copy of the 1994 Jim Carrey vehicle Dumb and Dumber.

In that moment, embarrassed and laughing through the shame of admitting she got derailed by a more-than-20-year-old, gross-out comedy, it became pretty clear why she got the role of the endlessly kindhearted Carmen Wade. As perhaps the show’s fiercest combatant inside the show’s pink-roped ring — and its most empathetic personality outside of it — Carmen is a big reason why Glow is so effective at portraying realistic friendships between women.

The show, which released its second season June 29, allows its characters to be snarky, affectionate, jealous and sloppy all at once. And as Carmen, Young inhabits all of those qualities perhaps better than anyone else in the supporting cast.

Mic: I appreciate you taking the time to talk to me, especially to interrupt the Dumb and Dumber extras, thank you so much.

Britney Young: I just got the unrated DVD. It’s my second-favorite movie, I’m just entranced by it, so I apologize. [laughs]

Wait, so what’s your first favorite movie then?

BY: The Goonies. I’m obsessed with it. Josh Brolin and Sean Astin when they’re babies? Who could miss that?

Congrats on Glow’s recent Emmy nominations. Where were you when you found out?

BY: I must have had it in my head that it was like the Oscar nominations, where they come out at, like, six o’clock in the morning. Who’s gonna realistically wake up for that? So I woke up and said, “Oh, let me see if the Emmy noms are out.” They weren’t, so I was like, “OK, maybe I’ll watch it.”

I did end up watching and I literally dropped my computer on the floor and stood up cheering when they announced we had been nominated for best comedy. The girls [on the show], we all have a WhatsApp group text, so it was a mad dash to get in there and say as much as I could before finding out all the categories. When we all came across [Betty Gilpin’s] category, I immediately started crying for her, I was so excited.

The strange thing about these nominations is they’re actually for the first season, right? Because of the way the timeline for Emmy nominations shook out?

BY: Yeah, it’s weird. I used to be an assistant [on Crazy Ex-Girlfriend], so I was the one who was having to submit our show for different awards, so I kind of know how that whole process works.

I think, if I’m correct, our first season ended up missing last year’s Emmy cut by, like, a week. We were super close to being considered last year, but it’s just so great to see that we were still in people’s minds a year later. People still wanted to show appreciation to our show, that’s a really great feeling.

In season two, Carmen has an arc in which she’s helping the character Bash (Chris Lowell) track down his butler, Florian, which leads them to a gay bar. Bash seems to come to the realization that he’s in a gay bar pretty slowly, but Carmen seems totally at ease the whole time. I was really struck by the fact that she was just like, “Hey, this place is awesome, can we stay?” Can you talk about filming that sequence?

BY: That was such a fun day, basically because it was like, “Hey, Britney and Kate [Nash], we’re just gonna have you dance in a sea of men to ‘80s songs.” But I also was really touched by that scene, mostly because it kind of shows a little bit of the naiveté of Carmen, specifically her comment about, “Oh, it’s an Irish bar, it must be like Bennigan’s.”

It still has that sweetness about her, but she really is like, “Hey, we’re in a gay bar, let’s just dance and have fun with everyone, let’s just be instead of being scared and being judgmental.” It’s just kind of a cross section of her naiveté and her sweetness and her willingness to accept everyone for who they are and wanting to celebrate that.

And I think that’s basically what her and Bash’s relationship is in the second season, that she wants him to accept himself for whatever he’s going to be, if that makes sense. She’s trying to help him find whatever that means to him. And that’s why I think, if you fast forward to the finale [when Bash proposes to Rhonda], where she’s just like, “What are you doing? This is not you.”

For me, the standout episode of the season is episode eight, in which we see an entire episode of the actual Glow TV show from start to finish. Did filming that episode feel different from the others?

BY: Yeah, I will definitely say when we all read the script, we were very much surprised that Netflix was even going to allow us to do it, because we were just so excited.

But yeah, it definitely did feel different, because there are so many new elements. We had to go pre-record the [“Don’t Kidnap”] song; we had dance rehearsal. Specifically, I think the first scene I shot of that episode was the “Griefercise” sequence, and I just remember on the first take, Betty basically turned it up to 11 and the rest of us girls were like, “Oh, we really need to go for it.”

You know, as an actor, you don’t want to purposely do bad acting, but when you realize what the episode was, we have to show what these girls would really be doing. It was just so much fun. That episode really makes me smile because there are so many references and homages to the ‘80s, like the “Don’t Kidnap” [song based on “We Are The World”]. It’s just insane.

What are your cultural touchstones from that time? When you watched episode eight, did any of the references or stylistic choices feel familiar or nostalgic to you, or did it just feel like “old TV”?

BY: I was born in ‘88, so I was barely in the ‘80s — just let me hair flip while I say that — but I grew up overseas, so most of my TV shows and movies were things that my parents had brought over from the United States. So that’s why The Goonies is my favorite movie. I was living in the ‘80s, film- and TV-wise, until I was about 10 and moved to the states.

What really hit me [in episode eight] was the Welfare Queen infomercial with the stop-motion and the doll karate-chopping the Tab soda can. That, to me, was just... I love it so much.

You also have a moment in the season where you’re filming the anti-teen-pregnancy PSA and your character gets the role of the giant baby ruining everyone’s lives, which is represented by you beating them up in the wrestling ring.

The show walks this line between employing offensive stereotypes and poking fun at them or exposing how absurd they are. So, how does the set feel during sequences like that? Are you ever worried you’re going to be made the butt of the joke in a malicious way when you have to film something that makes you more vulnerable?

BY: With the big baby scene, I actually was very, very nervous. I think I was nervous because in the world we live in with memes and GIFs, a plus-size girl in a baby costume, I was just like, “Oh my god, this is gonna be all over the internet. People are going to turn it into something that’s negative.” I really was freaking out about it.

I met with Liz [Flahive] and Carly [Mensch], our creators, and had a conversation and they told me why they included it in the script, why they think it’s going to be something that’s empowering, and I was like, “You know what, I trust you guys, I’m gonna do it.” Once I got in the ring, I totally understood what they meant.

It’s not all in there, I think it was a two-minute wrestling sequence turned into about 20 seconds with the final edit. I wrestled five girls. Who cares if I’m holding a rattle and I have a diaper on? That is something so empowering, especially for someone like me who’s a plus-size actress. There are so many stereotypes on TV showing plus-size people as lazy, as unfit, as not active, and here I was completely kicking ass.

This is kind of a tangent, but do you happen to watch RuPaul’s Drag Race?

BY: Um, I once in college missed an entire day of class to watch RuPaul’s Drag Race, yes.

Did you see Eureka dressed up as the giant baby in season 10?

BY: [laughs] Yes, I thought about that. I was like, “I don’t look as glamorous as she does.”

True, but she didn’t get to beat anyone up.

BY: True, that is very true. God, I love that show.

In an op-ed you wrote for Glamour around the release of Glow’s first season, you talked about how your body was the source of bullying in school — but on Glow, you get to use your body as a force of power. Now that you’re well past the show’s second season, has your relationship to your body changed at all? Do you see yourself differently after being on Glow?

BY: [Being on the show] definitely has changed things a lot. Like you said, growing up I was bullied really bad for a couple years until I made peace with that and was like, “I don’t care what you guys have to say, I’m gonna be the writer of my own story.”

But with Glow, when I go into the gym, my mindset has completely changed. It’s no longer to lose weight, it’s, “I gotta do what I gotta do so I can sustain a wrestling match, so I can pick up Betty Gilpin, so I can throw Jackie Tohn.” It’s now become this tool. It’s in my actor’s toolkit where I’m like, “OK, just like going to acting classes or voice lessons, I’m going to exercise my tool as much as possible so that on the day, it’s perfect and it can be used to my advantage.”

I’m still very confident, I’m still the same old me, but now I’m just like, “What can I do so that I can body-slam someone as viciously as possible?”