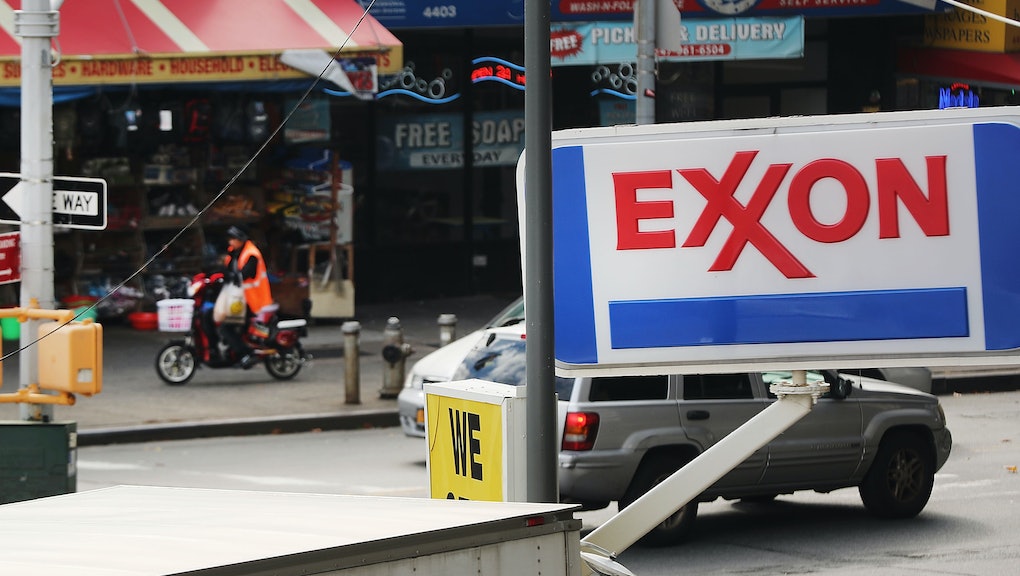 New York City’s efforts on climate change were dealt a blow in court Thursday, as a U.S. District Court judge dismissed a lawsuit the city brought against five oil and gas companies.

The city filed suit against BP, Shell, Chevron, ConocoPhillips and Exxon Mobil over the role the companies play in exacerbating climate change. According to the ruling, the companies are collectively responsible for over 11% of all carbon and methane pollution that has accumulated in the atmosphere since the Industrial Revolution.

They have also allegedly known for decades about the dire effects their businesses have on the environment; the ruling notes that the companies have known since the 1950s “that their fossil fuel products pose risks of severe impacts on the global climate” — yet despite knowing these risks, the companies “extensively promoted fossil fuels for pervasive use, while denying or downplaying these threats.”

These fossil fuel emissions are the primary cause of climate change and directly threaten New York City, the ruling explains. The city’s coastline is vulnerable to sea-level rise, which is largely due to climate-related factors, and the ruling notes that rising temperatures could result in an estimated 30% to 70% increase in heat-related deaths in the summer of 2020.

As a result, New York City sought compensatory damages for its climate change-related costs from the companies, in order to “shift the costs of protecting the City from climate change impacts back onto the companies that have done nearly all they could to create this existential threat.” The city argued that the companies’ “ongoing conduct continues to exacerbate global warming and cause recurring injuries to New York City,” and filed the lawsuit on the grounds of the companies’ actions being both a public and private nuisance and constituting as trespassing.

In his ruling, however, U.S. District Judge John F. Keenan dismissed the case by saying that federal law and the Clean Air Act displaces the city’s claims, as the “widespread global dispersal” of the companies’ greenhouse gas emissions go far beyond New York City. The Clean Air Act directs the Environmental Protection Agency to establish pollutant standards and prosecute polluters who do not comply, which a previous U.S. Supreme Court ruling noted means that “any federal common law right to seek abatement of carbon-dioxide emissions from fossil-fuel fired power plants” — such as New York City’s attack on oil companies — are displaced.

“Given the interstate nature of these claims, it would thus be illogical to allow the City to bring state law claims when courts have found that these matters are areas of federal concern that have been delegated to the Executive Branch as they require a uniform, national solution,” Keenan wrote.

Keenan also noted the global nature of these companies — two of which are not based in the U.S. — and that their greenhouse gas emissions prohibit the city’s case from going forward, due to “the need for judicial caution in the face of ‘serious foreign policy consequences.’”

“The Court recognizes that the City, and many other governmental entities around the United States and in other nations, will be forced to grapple with the harmful impacts of climate change in the coming decades,” Keenan wrote. “However, the immense and complicated problem of global warming requires a comprehensive solution that weighs the global benefits of fossil fuel use with the gravity of the impending harms.”

“To litigate such an action for injuries from foreign greenhouse gas emissions in federal court would severely infringe upon the foreign-policy decisions that are squarely within the purview of the political branches of the U.S. Government. Accordingly, the Court will exercise appropriate caution and decline to recognize such a cause of action.”

In a statement quoted by the New York Times, New York City spokesman Seth Stein said about the ruling: “The mayor believes big polluters must be held accountable for their contributions to climate change and the damage it will cause New York City. We intend to appeal this decision and to keep fighting for New Yorkers who will bear the brunt of climate change.”

Keenan argued against using the courts to fight climate change more generally in his ruling, saying “the serious problems caused [by climate change] are not for the judiciary to ameliorate. Global warming and solutions thereto must be addressed by the two other branches of government.”

This reasoning was praised by Chevron’s lead lawyer Theodore J. Boutrous Jr., who said in a statement quoted by the Times that “Judge Keenan got it exactly right.”

“Trying to resolve a complex, global policy issue like climate change through litigation is ‘illogical,’ and would intrude on the powers of Congress and the executive branch to address these issues as part of the democratic process,” Boutrous said.

Despite Keenan’s warning, however, New York City’s lawsuit is one of many climate change suits that have recently emerged and moved forward in an attempt to force accountability on climate change.

The New York City lawsuit marks the second oil company suit to be thrown out in recent weeks, after a similar legal challenge by the cities of San Francisco and Oakland, California, failed in June. Yet there are still other opportunities for such suits to prevail: The Boston Globe noted that more than a dozen cities and counties have filed suit against fossil fuel companies, including legal challenges in Colorado, Washington and Imperial Beach, California.

“It’s easy to see this decision as momentum,” Michael Burger, executive director of Columbia University’s Sabin Center for Climate Change Law, told Grist about the New York ruling’s potential effect on other cases. “[But] no other court is bound by this decision. It’s as simple as that.”

Rhode Island became the first state to file suit against these companies in early July, and the Boston Globe noted that state courts could take a different view than the more unfavorable recent federal court rulings. Keenan explained in his ruling that while federal common law challenges are invalid under the Clean Air Act, state law claims against polluters could be brought under “the law of each State where [oil and gas companies] operate power plants.”

The Trump administration has also been frequently taken to task in the court system for its role in exacerbating the climate change crisis. The New York Times reported in March that since January 2017, attorneys general in blue states have filed more than two dozen lawsuits against the Trump administration’s environmental policies — and the lawsuits have only continued to mount. Fourteen states sued the EPA for failing to establish guidelines for limiting methane emissions in April, and 17 states separately sued the EPA over its attempt to roll back emission standards in May.

Most recently, California and 14 other states filed suit against the EPA on Thursday over its recent decision to suspend Obama-era rules that limited pollution from trucks, the Associated Press reported. The initial rules limited the production of trucks with older engines that don’t meet emission standards. While the EPA claimed the rule was to protect small businesses who produce the trucks, the Obama administration said the pollution from these noncompliant engines could result in an additional 1,600 early deaths per year, according to the AP.

The lawsuits are aimed at forcing “science-based climate recovery action” in the states. The Florida lawsuit, for instance, attacks the government’s “deliberate indifference to [the Plaintiffs’] fundamental rights to a stable climate system in violation of Florida common law and the Florida Constitution” and asks the state to take such actions as “prepar[ing] and implement[ing] an enforceable comprehensive statewide remedial plan” to phase out fossil fuel use.

Twenty-one children and young adults are also taking the federal government to task for its climate change inaction. The federal lawsuit, which was first filed against the Obama administration in 2015, alleges that through “the government’s affirmative actions that cause climate change, it has violated the youngest generation’s constitutional rights to life, liberty, and property, as well as failed to protect essential public trust resources,” Our Children’s Trust wrote on its website.

The federal trial is currently scheduled to begin Oct. 29, although the Trump administration asked the U.S. Supreme Court on Tuesday to block further legal proceedings until an appeals court rules on a request to have the case dismissed.