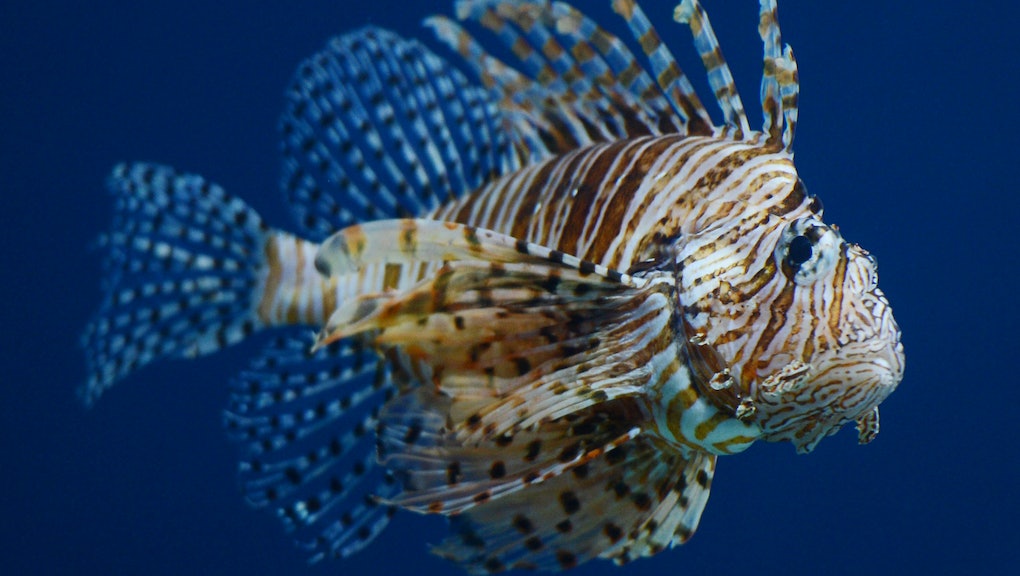 At this Caribbean hotel, guests can help with conservation efforts by killing fish

It’s now somewhat standard for a hotel to give guests the option to reuse towels and sheets in an effort to be more green by saving wash water. But beyond running a bit less laundry, what is the hospitality industry — one of world’s biggest users of resources — doing to help the planet?

At Sandals Grenada, guests with scuba certifications are encouraged to hunt fish — lionfish, specifically — on their holiday. The species is the cane toad of the Caribbean, invasive and multiplying at lightning speed, destroying reefs and commercial fishing industries. The fish has no natural predators and eats marine life 50% bigger than its own body. It will consume any living underwater creature it can fit inside its mouth, stuffing its stomach with more than 30 fish at a time.  They also have venomous spines that, according to those who have been stung, are painful beyond belief.

“We have a couple different ways we try to get guests involved [with conservation efforts],” Jonathan Hernould, environmental officer for Sandal’s philanthropic Sandals Foundation, said in an interview. (Mic traveled to Grenada on a trip hosted by Sandals Resorts). “We offer a lionfish hunting dive to our diving guests where they can go out with our dive team and catch, hunt and kill as many lionfish as possible.” Guests are taught to use specialized equipment, including pole spears and zoo keepers, which are plastic boxes in which to store the fish. These vacationers pay $50 to partake in one of these lionfish spear sessions. “The money goes directly back to the Sandals Foundation and lionfish programs we have around the Caribbean,” Hernould said.

Underwater, lionfish look like a mystical and glittery crib mobile, patterned with the classic Henry Bendel stripe. Above the surface they’re frightening, more like a Disney villain. The National Oceanic and Atmospheric Administration has described the lionfish invasion as “one the greatest ever man-made threats to Atlantic coral reefs.”

Lionfish have been ocean nemeses since the mid-1980s, when they first showed up off the Florida coast, Marcus Reamer, strategic communications director for the National Marine Sanctuary Foundation said in a phone interview. The species were common in the warmer waters of the western Pacific and, experts guess, made it to the Atlantic when people stopped wanting them as pets and released them out into the wild.

“Being non-native in the tropical Atlantic, they don’t have natural predators, and they reproduce very quickly and they can thrive in a variety of conditions,” Reamer said. “They’ve expanded in the last 30 years and along the way they’ve sort of bulldozed a number of native of species along the way.”

So how does one kill a lionfish? You spear them underwater. “You can come within a foot of a lionfish with a spear and they won’t move and they don’t care,” Hernould said. Reamer added that lionfish are particularly difficult to wipe out because they thrive in both shallow waters and deep, non-reef habitats. He said spear-fishing is one of the most viable ways to catch them, since they often linger in otherwise hard-to-reach places. Nets aren’t a great option because they drag along other species and coral.

If you’re having trouble fully understanding how a resort convinces vacationers to go out and murder marine life, Hernould said that it comes down to awareness. “It’s explaining to [the guests] that this fish doesn’t belong here and it’s destroying the natural Caribbean ecosystem. Once you show [guests] the inside of a lionfish and it has seven fish in their stomach, it becomes an easier sell and people don’t feel as guilty.”

I spotted some of these creatures on a dive and I found myself taken by their sparkling, buoyant beauty. When I returned to our dive boat, I was welcomed by a bucket of about a dozen very pungent, just-speared fish. Out of the water, they looked particularly unappetizing — and the smell didn’t help. But to my surprise, animal lover that I am, I didn’t really feel bad for the fish; learning about their impact on the beautiful underwater environment I’d just surfaced from helped me to reconcile the hunting process.

The Sandals Foundation also hosts events to educate the local community about the species, focusing on how to prepare lionfish and explaining that people need to “Eat It 2 Beat It.”

Beyond relying on guests’ will to kill, Sandals has several other green efforts in place. All Sandals resorts are signed up with EarthCheck, which ensures that hotels are involved in programs like towel reuse to cut down on water usage, sewage water treatment plans where sewage water is repurposed in landscaping and, when possible, recycling programs in which plastics are distributed to outside parties that will properly recycle the materials. Hernould added that all Sandals resorts partner with local farmers in an effort to reduce food waste; “any unfinished food is separated from the rest of our garbage and is given to local farmers so they can use it to feed their cows and pigs and whatnot,” he said.

These efforts are progress, but Hernould is the first to admit they’re not enough. “We’re always trying to evolve,” he said, explaining that the company is attempting to phase out straws, but still figuring out exactly the right way to do it. The brand is also looking into solar and wind power and additional ways to use less plastic.