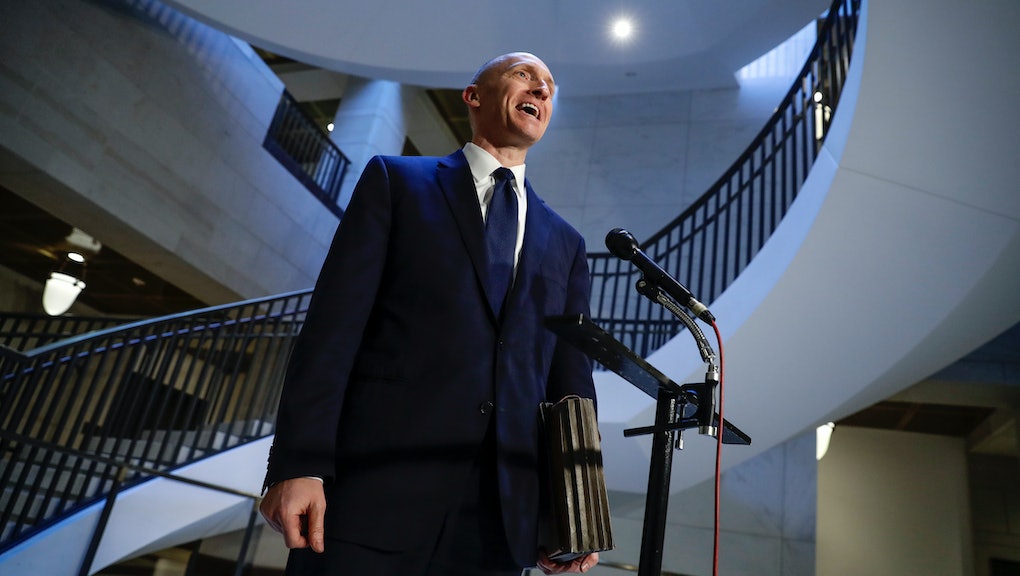 President Donald Trump took to Twitter Sunday morning to try and hit back against the Justice Department’s release of documents outlining Carter Page’s contacts with Russians during the 2016 presidential campaign.

On Saturday, the Justice Department released a warrant application the FBI had made to get permission to conduct surveillance on Page, a former Trump campaign adviser. The application to the Foreign Intelligence Surveillance Act court, made in October 2016, alleged that Page “has been collaborating and conspiring with the Russian government.”

The non-redacted portions of the 400-page FISA document make serious claims about Page’s ties to the Russian government. The Justice Department alleges in the documents that the former adviser “has established relationships with Russian government officials, including Russian intelligence officers” and that the “FBI believes the Russian government’s efforts to influence the 2016 U.S. presidential election were being coordinated with Page and perhaps other individuals associated with [Trump’s] campaign.”

“The FBI believes Page has been the subject of targeted recruitment by the Russian government,” the warrant says. After a redacted line, the document then continues, “undermine and influence the outcome of the 2016 U.S. presidential election in violation of U.S. criminal law. Mr. Page is a former foreign policy adviser to a candidate for U.S. president.”

Trump responded to the documents Sunday morning, relying on his claim of “witch hunt” to describe the investigation into his campaign.

“As usual they are ridiculously heavily redacted but confirm with little doubt that the Department of ‘Justice’ and FBI misled the courts,” Trump tweeted about the FISA documents Sunday. “Witch Hunt Rigged, a Scam!”

In a subsequent tweet, Trump hit back against the Steele dossier, which alleges the Trump campaign’s ties to Russia and that the Russians have compromising information on the now-president. Trump quoted Fox News as saying, “Source #1 [for the FISA warrant] was the (Fake) Dossier. Yes, the Dirty Dossier, paid for by Democrats as a hit piece against Trump, and looking for information that could discredit Candidate #1 Trump. Carter Page was just the foot to surveil the Trump campaign ...”

The president then tied the FISA warrant to the outcry sparked by his recent meeting with Russian President Vladimir Putin, claiming he “had a GREAT meeting with Putin and the Fake News used every bit of their energy to try and disparage it. So bad for our country!”

Page himself has denied the allegations, describing the FISA application as “spin” and a “complete joke” in an interview Sunday on CNN.

“I’ve never been an agent of a foreign power by any stretch of the imagination,” Page alleged Sunday.

The heavily redacted FISA documents, which enabled the government to surveil Page, were released Saturday after news organizations including the New York Times and USA Today filed lawsuits to obtain them through the Freedom of Information Act. Its release marks the first time a FISA application for surveillance has been released, the Washington Post noted, and such documents are considered to be highly classified.

The application previously made waves in February, as Republicans alleged in a memo that the FBI improperly relied on the dossier compiled by Christopher Steele to obtain the FISA warrant — which Democrats then rebutted in a separate report.

Republicans have previously pointed to the warrant’s reliance on the Steele dossier — which was initially commissioned by a firm that had been contracted by the Democratic National Committee and Hillary Clinton’s campaign — as evidence that the warrant was improperly granted, due to the dossier’s alleged bias. An initial Republican memo about the FISA warrant also claimed that the dossier’s origins were not mentioned in the warrant.

The now-released document, however, does disclose that the “U.S. person” who hired Steele “was likely looking for information that could be used to discredit [Trump’s] campaign,” and added that the FBI believes Steele’s reporting “to be credible.” Some details of the Steele dossier have been corroborated, although the document’s most salacious claims remain unverified.

David Kris, a former assistant attorney general for national security and associate deputy attorney general, wrote in a post for the Lawfare Institute that the page-long footnote dedicated to the potential bias behind the Steele dossier means “there is literally no way the FISA court could have missed it.”

“The FBI gave the court enough information to evaluate Steele’s credibility,” Kris wrote, also noting that the judges who signed off on the FISA applications were all appointed by Republican presidents.

Democrats are pointing to the now-released application as evidence that the FBI’s investigation into Page and the Trump campaign was legitimate. Rep. Adam Schiff, the ranking Democrat on the House Intelligence Committee, said in a statement quoted by the Washington Post that the FISA documents “underscore the legitimate concern [the] FBI had about Page’s activities as it was investigating Russia’s interference.”

“The GOP must cease their attacks on our law enforcement and intelligence communities, and finally decide where their loyalty lies,” Pelosi added.