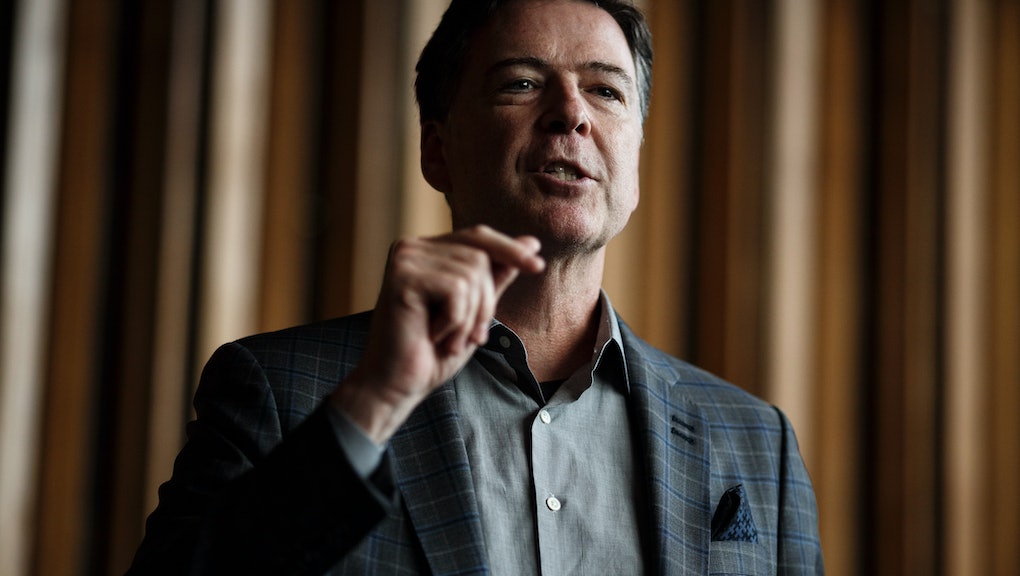 Where is the American “great middle” that James Comey is talking about?

On Sunday, former FBI Director — and former Republican — James Comey drew attention when he tweeted a passionate plea to the Democratic Party not to veer too far to the left.

“Democrats, please, please don’t lose your minds and rush to the socialist left,” Comey wrote. “This president and his Republican Party are counting on you to do exactly that. America’s great middle wants sensible, balanced, ethical leadership.”

Despite this plea, it’s difficult to find a public figure in recent history who has done more to hinder American political centrism than Comey himself, whose last intervention into electoral politics helped to tank the centrist presidential candidacy of Hillary Clinton.

Comey’s comments come in the context of a moment of broader panic among America’s center-left elites over the direction of the Democratic Party.

Over the weekend, rising progressive star Alexandria Ocasio-Cortez, who on June 26 defeated her centrist rival in the Democratic primary for New York’s 14th congressional district, and Sen. Bernie Sanders (I-Vt.) held a rally attended by thousands people in Wichita, Kansas. There, they made an emphatic case for pursuing a populist progressive agenda in the more conservative Midwest.

“Wherever there [are] working-class people, there is hope for the progressive movement,” Ocasio-Cortez said in a speech supporting progressive Kansas congressional candidate James Thompson.

At the same time that Sanders and Ocasio-Cortez were in Kansas, centrist candidates were holding their own event in Columbus, Ohio, to make the exact opposite case. Over the weekend, Third Way, a center-left Washington D.C.-based think tank, held its first ever Opportunity 2020 convention, where various centrist Democrats and moderates gathered to voice their concerns about the rising trend of left-progressive and socialist thought in America.

The “opportunity” theme of the convention was designed to combat the progressive focus on correcting “inequality,” offering an economic message that was less hostile to America’s one percent.

“You’re not going to make me hate somebody just because they’re rich,” said Rep. Tim Ryan (D-Ohio), a rumored contender for speaker of the House, and possible presidential contender, reportedly told the crowd. “I want to be rich!”

This debate between the center and the left of the Democratic Party has been roiling since the 2016 presidential primary between Hillary Clinton and Bernie Sanders, with both sides claiming theirs is the only legitimate path to Democratic victory in the coming 2018 and 2020 elections.

While the center continues to pour the money from its wealthy donors into such mainstays like the invite-only event held in Columbus, progressives appear to be winning the battle for the hearts and minds of the American public.

“The most recent data suggest that 30% of Americans have a favorable view of Comey, while 59% of Americans support Medicare for All, and a guaranteed job has majority support in every state in the country,” Sean McElwee, co-founder of the progressive data collective Data for Progress told Mic today. “The American public are far more supportive of socialist policies than Jim Comey.”

While Comey himself is a poor standard-bearer for centrism as a whole — still loathed by many centrist Democrats for his role in helping elect Donald Trump — the broader data on voter attitudes suggest America is warming up to a more socialist agenda.

Polling since the 2016 election has consistently found that Sanders, the nation’s highest-ranking elected democratic socialist, is among the most popular politicians in the country. And analyses by groups like DFP have found that socialist policies like Medicare-for-All have broad support across the nation.

“Medicare for All has 54% support in the median state. Even in the state with the lowest support, Wyoming, 45% support the policy,” said McElwee. “There are only eight states where Medicare for All doesn’t hit majority support, and that’s including ‘don’t knows’ in the equation (as not in support). If Medicare for All were on the ballot, it would win an electoral college landslide on par with Lyndon Johnson.”

In December, McElwee and political scientist Chris Skovron tested Comey’s implied theory that leftist politics could not win in swing districts in 2018. After conducting an analysis of the political attitudes in the Democratic Congressional Campaign Committee’s 91 target districts in 2018, they found majority support for issues like raising the minimum wage to ending mandatory minimum sentences for low-level crime.

These findings and others pose tough questions for American centrists, who typically pride themselves on finding pragmatic data-driven conclusions. With the 2018 midterms around the corner, Democrats will soon get a chance to test these opposing theories ahead of one of the most important presidential elections in the party’s history.