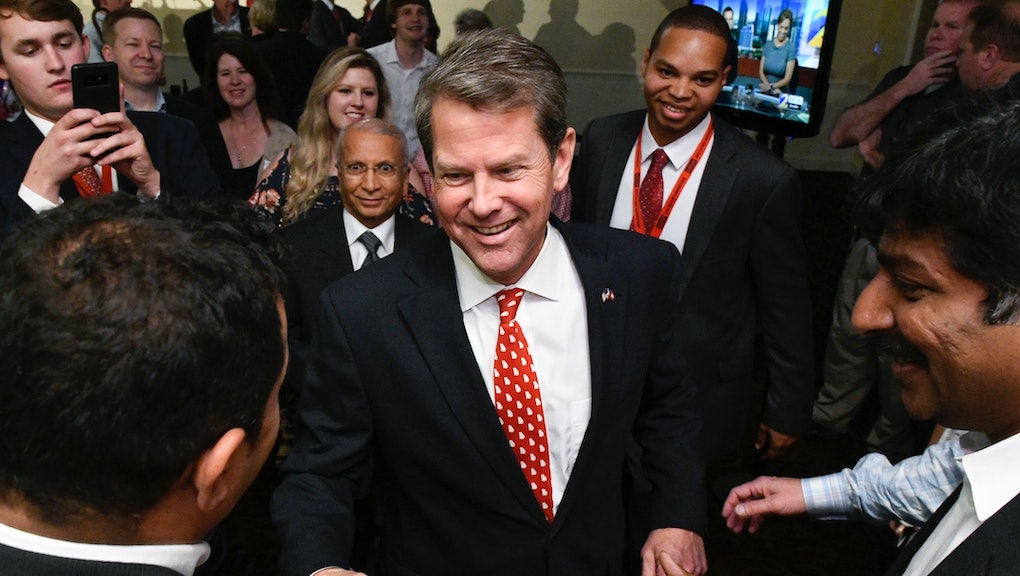 President Donald Trump has upended the final days of a GOP gubernatorial runoff in Georgia after he unexpectedly endorsed the candidate Republican strategists in the state worry is less electable.

Trump on Wednesday endorsed Georgia Secretary of State Brian Kemp over Lt. Gov. Casey Cagle, less than a week before Tuesday’s runoff, saying on Twitter that Kemp is “tough on crime” and “strong on the border and illegal immigration.”

“He loves our Military and our Vets and protects our Second Amendment,” Trump tweeted. “I give him my full and total endorsement.”

Republicans in the state were caught off guard by Trump’s 11th-hour endorsement according to a GOP strategist who spoke with Mic and was granted anonymity to speak freely because of fear of losing their job.

“It was a shock, because nobody that I know — and I know people on both teams and I believe them when they say this because none of them are real good at keeping secrets — I don’t think anybody saw it coming,” the GOP strategist said.

Kemp placed second in the May primary, pulling 25.6% of the vote to Cagle’s 38.9%. Strategists believed Cagle would be the more electable Republican in November against Stacey Abrams, who easily won the Democratic nomination in May.

Yet Cagle has been dogged in recent weeks by the release of audio in which he said the GOP primary electorate didn’t care about policy, but rather “who could be the craziest.”

“This primary felt like it was who had the biggest gun, who had the biggest truck, you know, and who could be the craziest,” Cagle says in the leaked audio, which was secretly recorded by one of his former primary opponents, according to local NBC affiliate 11Alive.

The GOP strategist said that the audio shifted the momentum toward Kemp, and that Trump appears to have endorsed him after it became clear that Kemp would be the nominee. Trump’s endorsement was a “good way to get a win that was likely going to happen anyway,” the strategist said.

Kemp, for his part, would have his own struggles in a November general election. He embraced Trump’s culture war in the primary, which could be problematic in a general election with a wider array of voters.

In the primary, in order to separate himself from the crowded GOP field, Kemp also ran kitschy ads in which he said he’ll use his pick-up truck to round up undocumented immigrants, and pointed a rifle at a young man who said he wanted to date his daughter.

Kemp, who as secretary of state is in charge of Georgia’s elections, also rejected federal funding to protect Georgia’s voting systems during the Republican interference in the 2016 campaign. He said in August 2016 that the funding was the Obama administration trying to “subvert the Constitution.”

“It seems like now it’s just the D.C. media and the bureaucrats, because of the DNC getting hacked — they now think our whole system is on the verge of disaster because some Russian’s going to tap into the voting system,” Kemp told Politico during the height of the 2016 campaign. “And that’s just not — I mean, anything is possible, but it is not probable at all, the way our systems are set up.”

Of course, Georgia was one of the states that was targeted by Russian hackers, according to the indictment of 12 Russians filed by the investigative team of special counsel Robert Mueller.

Cagle meanwhile, is dismissing Trump’s endorsement, blaming it on “Washington insiders” who convinced Trump to “make a power play.”

The gubernatorial contest is rated a Likely Republican contest by Roll Call/Inside Elections.