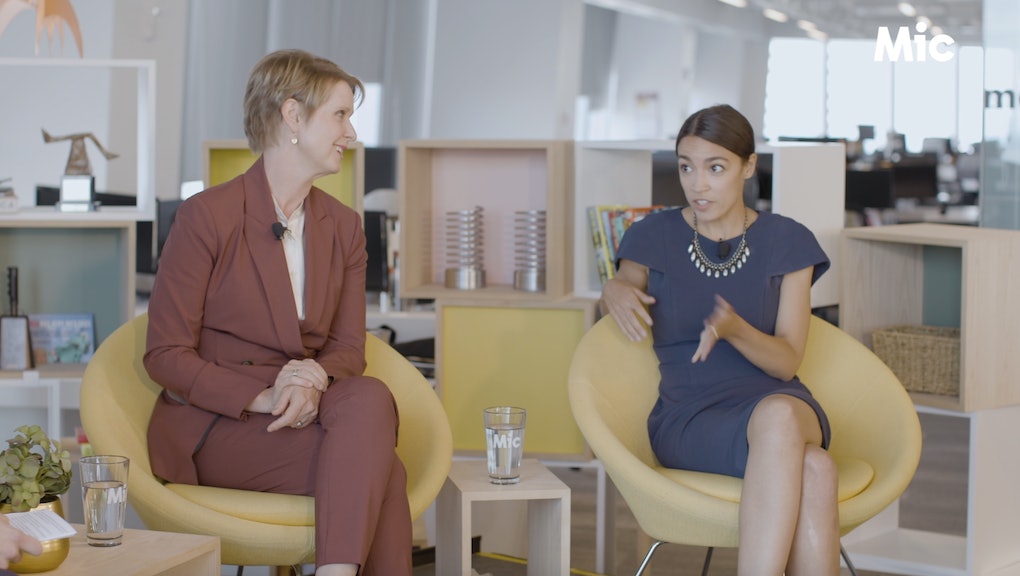 Then, Mic correspondent Chantel Simpson talks with members of Fat Girls Dance, a community of plus-size women who are challenging the public’s perceptions of what plus-size women are capable of.

Alexandria Ocasio-Cortez, Democratic candidate for New York’s 14th Congressional District: People are saying, “Oh, you’re doing this, you’re destroying the party, you’re too young, you’re not ready.” If we’re gonna wait for the 80% of dudes in Congress to give me permission, I’m gonna be 80 by the time I get in there.

Ocasio-Cortez: People are saying, “Oh, you’re doing this, you’re destroying the party, you’re too young, you’re not ready, you’re naive, you’re uneducated.” Blah, blah, blah, blah. That is what I’ve been told, and that’s what women have been told their whole lives whenever they want to do anything ambitious. So you know what, screw it. They’re gonna say it. Cause some trouble. Get that 50%, get that parity, get that gender-expanding representation in Congress. ‘Cause you gotta claim it. You gotta take it. If we’re gonna wait for the 80% of dudes in Congress to give me permission, I’m gonna be 80 by the time I get in there.

Jake Horowitz, co-founder, Mic (voiceover): This is Alexandria Ocasio-Cortez, a 28-year-old Bronx native who just defeated a 19-year incumbent to become a Democratic nominee for Congress in New York City. She and Sex and the City star — and New York gubernatorial candidate — Cynthia Nixon have embraced Democratic socialism and are working to push Democrats to the left. But are they the future of the party, or are they just change agents? I invited both candidates to Mic’s office for an interview in front of a live audience in order to find out.

Horowitz, in interview: Cynthia, just a couple weeks after Alexandria Ocasio-Cortez’s surprise win, you came out and said you’re now a Democratic Socialist. So I wanted to ask you a little bit about that.

Horowitz: Why didn’t you embrace that label sooner?

Horowitz (voiceover): Although Democratic socialism is having a moment, it’s also highly controversial. Democratic Socialists call for progressive policies like free college, “Medicare-for-all” and ending corporate money in politics — but also more contentious ideas that are opposed by even some Democrats, like eliminating prisons, boycotting and divesting from Israel and abolishing ICE.

Horowitz, in interview: Alexandria, former Sen. Joe Lieberman put out an op-ed saying that these positions, your positions, are too extreme.

Horowitz: And this is not what the future of the Democratic Party should look like. Yeah. Why is he wrong?

Ocasio-Cortez: Because I got elected.

Horowitz: So we know that both of you support a higher minimum wage. What about a maximum wage for CEOs to bring about parity in the workplace?

Ocasio-Cortez: This is a — it’s a really interesting discussion that’s happening. I feel like it’s a very nascent conversation and, what I always do is that I just keep an ear on the ground.

Nixon: And there’s some companies that have done this proactively themselves.

Ocasio-Cortez: Yeah, yeah absolutely. So for example, Ben & Jerry’s as you elude to — Ben & Jerry’s has baked into their kind of company charter in a way that the CEO is not to make more than X amount or X times the lowest-paid worker, and those companies tend to just operate in very just ways, and they’re very interestingly formed and they’re formed around principles of justice.

Horowitz (voiceover): Ben & Jerry’s is one of a few companies in the U.S. addressing wage disparity by tying CEO pay to its lowest-paid worker. Although ideas like this remain on the fringe, some leaders in the progressive movement, including Sen. Bernie Sanders, have called for capping CEO pay on a national scale.

[Bernie Sanders, in clip: What a phenomenon! Huge transfer of wealth from working people to the millionaires and billionaires.]

Ocasio-Cortez: So ICE is the second-largest criminal enforcement agency in America. In America. And it is not accountable to the U.S. Department of Justice. So we have a rogue agency, with a massive budget, that does not have the accountability of our traditional due process systems.

Ocasio-Cortez: I do think it needs to go through due process, because I think that —

Horowitz: Meaning the Department of Justice.

Horowitz: You had, it seemed, a bit of a stumble earlier this week when you were asked about Israel and foreign policy.

[Margaret Hoover, in PBS clip: You use the term “the occupation of Palestine.” What did you mean by that?]

[Ocasio-Cortez in PBS clip: Oh, I think what I meant is, like, the settlements that are increasing.]

Horowitz: What are the tenants of your foreign policy beliefs?

Ocasio-Cortez: So I think a lot of what we’re dealing with right now has to do with the fact, in my opinion, that we have not centered humanitarian approaches to foreign policy. I don’t know how much we have prioritized, perhaps as much as we should, crises of human rights — not only human rights, but also how we approach things like famine, how we approach things like extreme poverty, which, as we see, poverty — extreme poverty is a form of, to me — I mean, to me, extreme poverty is in a way a form of violence.

Horowitz (voiceover): Because of New York’s unique balloting system, Ocasio-Cortez may once again face the person she already beat, Joe Crowley, but this time as a third-party challenger. And Nixon could also run as a third-party candidate if she were to lose her primary to current New York Gov. Andrew Cuomo. When I pressed them about this, they both dodged the question.

Nixon: I’m not the only person on another ballot line. Andrew Cuomo is actually on two different ballot lines. He’s on the Independence Party line and he’s on the Women’s Equality Party line, which is a party that he invented and that he funds.

Ocasio-Cortez: And so is Joe Crowley as well. He’s not just on the WFP line. So Cynthia and I have both been snubbed by the Women’s Equality Party as the only female candidates in our races, but that’s fine.

Horowitz (voiceover): Ocasio-Cortez and Nixon have openly endorsed one another and are now campaigning together. They join a record-breaking number of women who are running for office in the Trump era.

Nixon: You know, we’re told, “Oh, you don’t have a chance against the establishment, against all this money, against this incumbent,” but I think that what we’re doing by creating a chain is we’re not only we’re supporting, but we’re echoing. We’re smaller in number now, but we’re a mighty force, we’re a mighty force to be reckoned with. And you gotta understand, we’re in this party, too. We’re in the Democratic Party too and we’re not your enemy, actually we’re your best hope.

Del Toro: It is no secret that our media culture is obsessed with being skinny, and that all too often, bigger girls are the target of body shaming. But a group of women in New York decided to buck perceptions of what plus-size women are capable of doing with their bodies. They created Fat Girls Dance. It’s a movement that’s gone viral and global. Our correspondent Chantel Simpson reports on how big women are owning and moving their bodies.

Cathleen Meredith, founder, Fat Girls Dance (voiceover): You certainly shouldn’t be dancing on camera and watching all your body parts jiggle. You shouldn’t draw attention to yourself because you are an abomination. There’s this constant narrative of, “No one wants to see that.” Fat Girls Dance was kind of birthed from that.

Chantel Simpson, correspondent: Fat Girls Dance is a global movement. These women dance to crush negative perceptions of fat bodies and what they can and cannot do. It all started with an observation.

Meredith: I always thought that I had a pretty good confidence built up in me. You know, it’s like, “I’m dope. I don’t know what the hell you’re talking about.” I was very confident, but then during Fat Girls Dance, I realized that I did have body-image issues and that, you know, I hated my tummy and that, you know, whenever I had to dance and it flopped about, I was like, “Oh God, what the fuck? It’s awful.” But then I started to love it.

Simpson (voiceover): That newfound love spread worldwide. Fat Girls Dance has influenced women across the globe to embrace and move their bodies, even if people don’t show them love back.

Meredith: We have a group in Bali, Indonesia, and they were telling us about how when they dance, they’re openly laughed at. Usually when we dance, people are like, “Yaaass,” and they’re really excited and they just leave their negative comments for Twitter. I’m like, “God, y’all braver than us.” It was interesting to go to dance classes and get people’s reactions that were always like surprised. Like, “Oh wow, that fat girl can move,” or it’s like, “All right, I see you. I see you.” Like it’s always a shock that I am dancing and dancing well.

Simpson (voiceover): So Cathleen and her friend Raveen decided to show people exactly what they can do. In August 2016, Fat Girls Dance was born. The duo and a group of friends posted their first choreographed dance online. That first video launched a 52-week challenge. Every week, the group would select a dance, rehearse it, shoot it, then post it. Their videos went viral.

Akita Jones, choreographer, Fat Girls Dance: Every comment has been positive. Women are saying we’re giving them the confidence to step outside of themselves and dance as well. So, you know, you got people that stopped doing what they love because of what people were saying. But now we’re doing it, so they see that they can do it as well.

Simpson (voiceover): I went to one of their rehearsals to see firsthand how the group gets down. I even learned some choreography. But let’s just say I was no match against the many talented women of the group.

Raveen Battee, co-founder, Fat Girls Dance: There’s definitely a sense of family and community. And that’s kind of what the intention of the space is. The other thing is seeing myself surpass challenges. I mean, some of the stuff that we’ve had to do, I would go, “I don’t think we can do that.” But then we would.

Simpson: How do you think the group is changing people’s perceptions of how bigger bodies should move?

Battee: I’ve had so many people be like, “Oh yeah, I’d love to join that dance class. Let me just lose a couple pounds.” Not only should your body move in whatever size it is, but it should be allowed to move and visually seen and people should be OK with that.

Del Toro: I think what they are doing is so inspiring. They’re dancing, they’re having fun and they’re creating community. And for this edition, we wanted to end on a positive note. A body positive note. Thanks for watching Mic Dispatch. Don’t forget to leave comments on our show page. See you next time.

Check out episode three of Mic Dispatch — only on Facebook Watch.