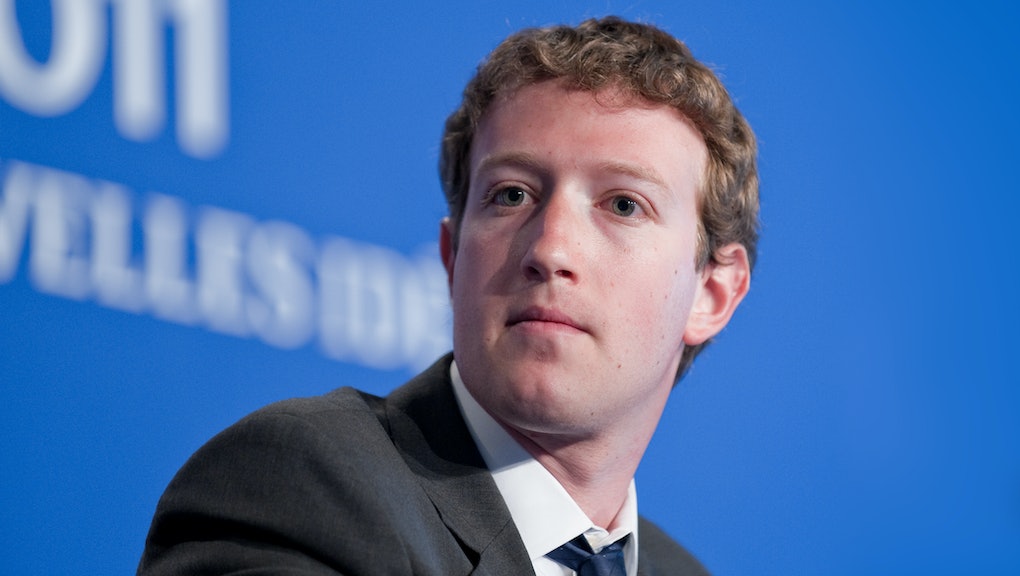 The parents of Noah Pozner, a 6-year-old victim of the Sandy Hook Elementary School shooting in 2012, are accusing Facebook of allowing certain types of false information — specifically, conspiracy theories claiming the Sandy Hook shooting was a hoax — to live on the social networking site.

Leonard Pozner and Veronique De La Rosa detailed their experiences in an open letter to Facebook CEO Mark Zuckerberg via the Guardian.

In the letter, Pozner and De La Rosa said that shortly after Noah was killed — along with 25 other people, 19 of whom were children — they began getting harassed by people who didn’t believe the shooting actually occurred.

“Conspiracy groups and anti-government provocateurs began making claims on Facebook that the massacre was a hoax, that the murdered were so-called ‘crisis actors’ and that their audience should rise up to ‘find out the truth’ about our families,” they wrote. “These claims and calls to action spread across Facebook like wildfire and, despite our pleas, were protected by Facebook.”

Pozner and De La Rosa’s letter comes on the heels of an interview Zuckerberg recently gave to Recode, in which he explained why some inaccurate information gets removed from Facebook and why some is allowed to remain on the platform. Defending his company, Zuckerberg argued Facebook’s responsibility is “to prevent hoaxes from going viral and being widely distributed.”

In regard to Sandy Hook specifically, Zuckerberg said, “I also think that going to someone who is a victim of Sandy Hook and telling them, ‘Hey, no, you’re a liar’ — that is harassment, and we actually will take that down.”

However, Zuckerberg also drew a parallel between Sandy Hook conspiracy theorists and Holocaust deniers in the interview.

“I find [Holocaust denials] deeply offensive,” he said. “But at the end of the day, I don’t believe that our platform should take that down because I think there are things that different people get wrong.”

In their letter, Pozner and De La Rosa took issue with Zuckerberg’s statements.

“While you implied that Facebook would act more quickly to take down harassment directed at Sandy Hook victims than, say, the posts of Holocaust deniers, that is not our experience,” they wrote.

Elsewhere in the letter, Pozner and De La Rosa described some of the harassment they’ve had to withstand since 2012.

“We have endured online, telephone and in-person harassment, abuse and death threats,” they wrote. “In fact, one of the abusers was sentenced to jail for credible death threats that she admitted in court she had uttered because she believed in online content created by these ‘fringe groups.’”

It isn’t just random users who traffic in conspiracy theories about Sandy Hook, though. Video series on Facebook, like Alex Jones’ InfoWars, have played a big role in furthering the idea the shooting was a hoax. Some media figures and professors have also questioned the Sandy Hook shooting’s official narrative, speculating that Adam Lanza wasn’t the only shooter and claiming the government hired “crisis actors” to further its gun control agenda.

Families who lost loved ones in the Sandy Hook tragedy are suing Jones for defamation, and services like YouTube have started to remove Jones’ videos for violating its guidelines against hate speech. But Facebook continues to give the conservative host a platform.

In his interview with Recode, Zuckerberg said content leading to physical harm would be removed from the site. The next day, Facebook announced it would take steps to do exactly that.

“We have identified that there is a type of misinformation that is shared in certain countries that can incite underlying tensions and lead to physical harm offline,” Tessa Lyons, Facebook’ product manager, told the New York Times. Places like Sri Lanka and Myanmar have seen many acts of violence against minorities, much of it orchestrated on Facebook.

The families of Sandy Hook victims have also had to face real-world consequences because of Facebook’s willingness to host false information related to the shooting.

“In order to protect ourselves and our surviving children, we have had to relocate numerous times,” Pozner and De La Rosa wrote. “These groups use social media, including Facebook, to ‘hunt’ us, posting our home address and videos of our house online.” According to the letter, Pozner and De La Rosa are “currently living in hiding.”

Noah’s parents offered Zuckerberg a simple solution: “Treat victims of mass shootings and other tragedies as a protected group, such that attacks on them are specifically against Facebook policy.”