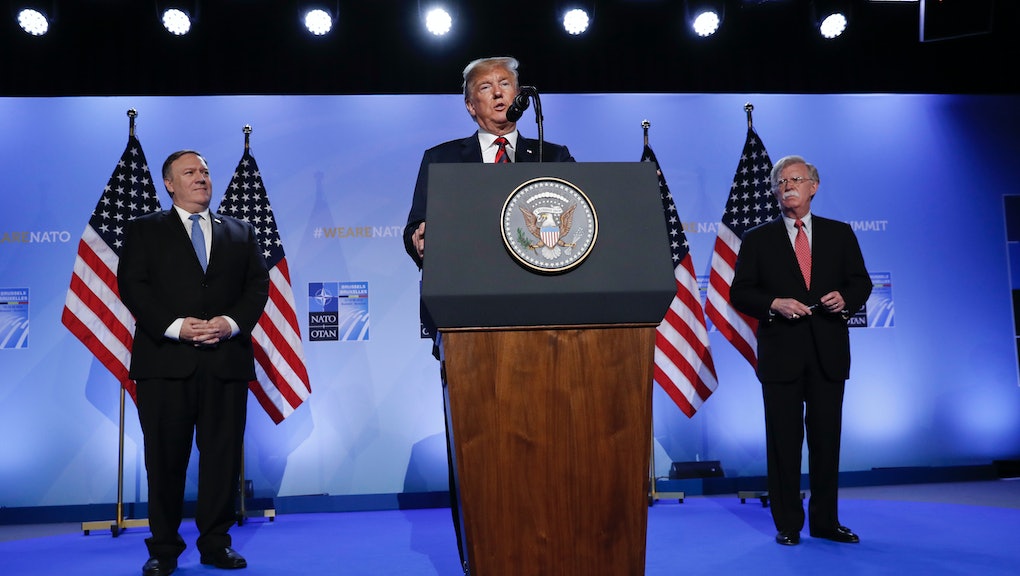 “This isn’t like North Korea”: Trump’s saber-rattling could put US on a collision course with Iran

President Donald Trump’s all-caps Twitter threat against Iran on Sunday night has been described by turns as an attempt to distract from the fallout over the Helsinki summit, a cunning strategy to justify his push for warmer relations with Russia and a possible return to the “fire and fury” bluster he has claimed led to his historic meeting with Kim Jong Un in June.

However, the president’s heated rhetoric may signal something far darker — a “dangerous” rattling of the saber that could put the United States and Iran on a potential path to conflict, experts said in multiple interviews with Mic.

Tensions between Washington and Tehran have been brewing since Trump withdrew from the Iran nuclear deal in May. They intensified over the weekend when Iranian President Hassan Rouhani warned the U.S. against reinstating sanctions against the country.

That remark led to an all-caps response from Trump on Twitter.

“To Iranian President Rouhani: NEVER, EVER THREATEN THE UNITED STATES AGAIN OR YOU WILL SUFFER CONSEQUENCES THE LIKES OF WHICH FEW THROUGHOUT HISTORY HAVE EVER SUFFERED BEFORE,” Trump tweeted late Sunday night. “WE ARE NO LONGER A COUNTRY THAT WILL STAND FOR YOUR DEMENTED WORDS OF VIOLENCE & DEATH.

The retort mirrored some of the harsh threats Trump leveled against the Kim regime in the summer of 2017, which the president suggested in April had prevented nuclear war and pressured Kim to come to the negotiating table with South Korea and the U.S. This is quite a dubious proposition, James McKeon, a policy analyst at the Center for Arms Control & Non-Proliferation, said in a phone interview.

The diplomatic breakthroughs on the peninsula were the result of South Korean President Moon Jae-in’s outreach to Kim, McKeon said, whereas Trump’s Twitter threats seem more like impulse than method.

While Trump’s threats to both North Korea and Iran may be off-the-cuff, the administration could have different aims in its approach to Iran, Johnson said.

“This isn’t like North Korea, where the president was acting on his worst impulses independently,” he said. “There is a very established constituency in Washington for outright war with Iran, and its reach now extends to the highest levels of the White House.”

During Trump’s feud with Kim, in which the two routinely exchanged grave threats and schoolyard taunts, then-Secretary of State Rex Tillerson publicly pursued diplomatic solutions on the peninsula, even saying he’d meet with North Korea “without precondition.” But the administration’s current foreign policy team — which critics have dubbed a “war Cabinet” — has signaled it may be seeking a regime change in Iran.

Prior to Trump’s “BE CAUTIOUS!” tweet, Secretary of State Mike Pompeo railed against Iran in a speech Sunday in California, characterizing its government as a “kleptocracy” that has sought to “line its own pockets” at the expense of its people.

“They have been ill-treated by a revolutionary regime,” Pompeo said of the Iranian people in a speech that included multiple exaggerations. “Iranians want to be governed with dignity, accountability and respect.”

National security adviser John Bolton, an Iran hawk who was also one of the driving forces behind the U.S. invasion of Iraq while serving in the George W. Bush administration, backed up Trump’s hostile tweet.

“I spoke to the president over the last several days, and President Trump told me that if Iran does anything at all to the negative, they will pay a price few countries have ever paid,” Bolton told reporters Monday.

That Trump’s belligerent threats are supported by those around him suggests the administration could be headed for an Iraq War-style conflict with Iran, Erica Fein, advocacy director at the progressive foreign policy organization Win Without War, said in an email.

“Even casual foreign policy observers can see that Trump and his war Cabinet — including John Bolton, Mike Pompeo and [United Nations ambassador] Nikki Haley — seek violent overthrow of the Iranian regime,” Fein said. “While in this case there was a major element of distraction to the tweet, it would be foolish to write it off as anything other than another signal that Trump’s Iran ‘strategy’ is headed in the same direction as George W. Bush’s ‘strategy’ for Iraq.”

Trump administration officials have reportedly claimed the tweet was part of a “long-planned” strategy to re-impose sanctions against Iran after the United States’ pullout from the Joint Comprehensive Plan of Action — the 2015 multilateral deal between the U.S., Iran and other countries that freed tens of billions of dollars of Iran’s assets in exchange for the country reducing its nuclear program. This included a reduction in both the number of Iran’s uranium-enrichment centrifuges and its uranium stockpile, the latter of which by 98%.

Trump withdrew from that deal in May, calling the accord signed by former President Barack Obama “horrible” and “one-sided.” He claimed the agreement placed “very weak limits on the regime’s nuclear activity” and that Iran had violated its terms, a view that contradicts the findings of international watchdogs.

The Center for Arms Control & Non-Proliferation’s McKeon on Wednesday said Trump’s criticisms of the Iran deal are “ironic,” given his current dealings with North Korea.

What Trump decried as “weak” was actually strict and verifiable, McKeon added, and “prevented Iran from getting nuclear weapons in the first place,” whereas the agreement he struck with Kim was vague. While there are signs North Korea might be moving to dismantle one of its key test sites, it remains unclear how serious Kim is about denuclearizing.

“He hates a robust verifiable agreement but loves when the North Koreans take the smallest step toward denuclearization,” McKeon said. “Pulling out of [the Iran accord] was a disastrous move. The ramifications for that move are going to be very robust for the next few years and maybe even longer.”

McKeon said Trump’s rhetoric against Iran’s leadership is fueling concerns that he’s seeking a regime change in the country. His threats could increase the risk that the U.S. and Iran “stumble into a conflict” that would be “disastrous for both sides,” he added.

“Any time you have two adversaries that are verbally sparring, it increases the chances of miscalculation in the future,” McKeon said.

Iranian Foreign Minister Javad Zarif responded to Trump’s tweet Sunday by saying Tehran was “UNIMPRESSED” with his threat, referencing the president’s harsh rhetoric against North Korea to suggest he is bluffing.

“The world heard even harsher bluster a few months ago,” Zarif tweeted. “And Iranians have heard them — albeit more civilized ones — for 40 yrs.”

“BE CAUTIOUS!” he added.