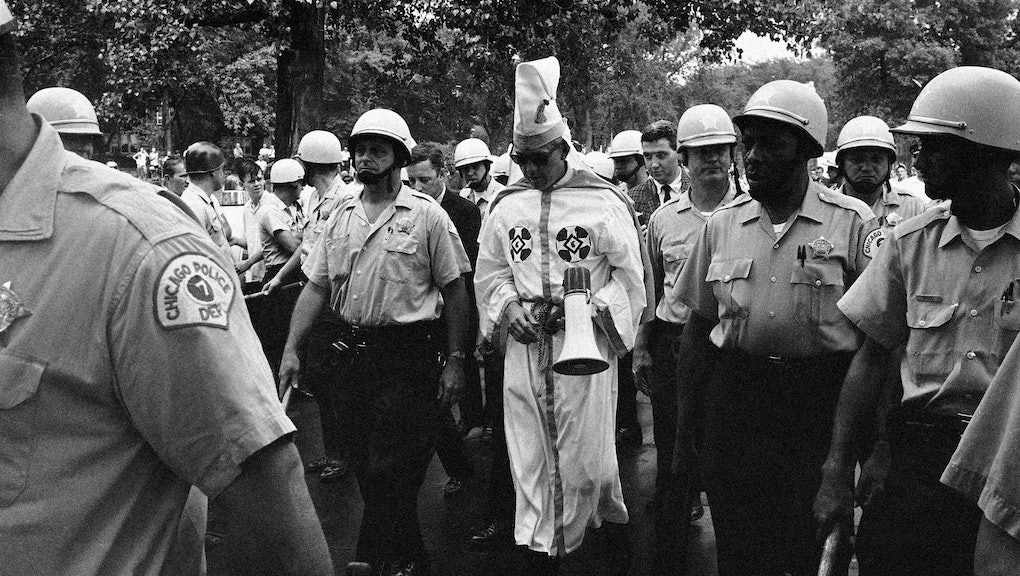 In the wake of Alexandria Ocasio-Cortez’s primary victory in New York in June, Sen. Tammy Duckworth (D-Ill.) launched a furious online debate about the political heart of the Midwest when she suggested non-centrist candidates didn’t stand a chance in the region.

As Duckworth suggested, President Donald Trump’s narrow victories in Midwestern states like Wisconsin and Michigan did play a large part in getting him into the White House — but the second half of her sentiment doesn’t exactly jibe with the reality of the region’s long history of radical politics.

The far-left and far-right have always been part of the Midwest’s political makeup. In fact, the region has been crucial in the development of radicalism on both extreme ends of the political spectrum. What’s more, the Midwest has seen the same uptick in far-right and far-left politics we’ve seen around the country in recent years.

The Midwest, an often misunderstood part of the country, has been in the spotlight since Trump’s election suggested the media — and Democrats — had been ignoring the “flyover states” for too long. Dominated by agriculture and a reputation for niceness, the region isn’t associated strongly with extremism in the public conscience. But even a cursory glance at the region’s history reveals it’s far from a centrist paradise.

“Chicago has a long history of leftist and militant worker organizing, from Lucy Gonzalez Parsons and the Haymarket [affair] to the Chicago Teachers Union strike in 2012,” Lucero Macias, co-chair of the Chicago Democratic Socialists of America, said in an email interview.

As Macias suggested, the history of socialism in the Midwest is considerable. The violent breakup of the Haymarket labor protests of 1886 was a watershed moment in the then-fledgling labor movement. Parsons, a radical anarchist who worked alongside her husband until his killing following the Haymarket affair, was considered “more dangerous than a thousand rioters” by Chicago police due to her work on behalf of fellow people of color and in the labor movement.

Eugene Debs, the longtime leader of the modern Democratic Socialist Party, was born in Indiana and built a strong base of support across the region in the late 1800s and early 1900s. The violent breakup of the 1894 Pullman Strike, which took place in Illinois, was met with protests that brought us Labor Day. Socialists won numerous elections in Milwaukee in the early 1900s, and in the mid-century the Black Power movement was strong in cities like Chicago and Detroit. Today, Antifa has a strong presence in the region’s cities.

“It may have been forgotten by some, but DSA chapters all over the Midwest know about [this history], and we’re inspired by this history to continue building the movement,” Macias said. “I think it really says something that our biggest membership bump ever has come after the Ocasio-Cortez win.”

Chicago’s DSA chapter has received an increase of about 200 members since the primary, according to Macias. “By May 2018, CDSA had about 1,300 members, and since the primary win, we’ve reached 1,500 in the Chicago area,” she said.

“We see that he is someone that truly listens to the people and isn’t afraid to stand up against a neoliberal mayor. He isn’t afraid to call out corporate-friendly democrats who refuse to listen to their constituents and instead vote however Rahm [Emanuel] wants them to vote,” Macias said.

But it’s not just Chicago where the DSA has seen gains. The group has endorsed successful candidates for elections in Minnesota, Ohio, and Iowa, including small towns and large cities alike. Most of these wins have been to local elections, such as for school board and city councils, while candidates for national offices have fallen short in the region.

The DSA isn’t the only group that can invoke a long history in the Midwest — or the only one that has experienced an increase in support in recent years. The far-right and white supremacy has a no-less established connection to the region, albeit one that is similarly often overlooked.

“The Midwest has an experience with extremism that I think most people don’t really know about,” Heidi Beirich, director of the Intelligence Project at the Southern Poverty Law Center told Mic. “A lot of people don’t think of the Klan having a presence outside of the South... The Klan was bigger in the 1920s, 1930s, 1940s in places like Indiana than it was in the South.” Beirich points to Skokie, IL, a Chicago suburb, as another example of the far-right’s presence in the region; in the late 1970s, the suburb became a hotbed of debate surrounding the First Amendment after the National Socialist Party of America announced plans to march there.

That period of Ku Klux Klan expansion, known as the Second Klan, saw widespread development of affiliates in Midwestern states. The group established headquarters in rural and urban communities across the region, and in many cases sought political power predicated on anti-immigration and anti-integration policies along with anti-semitic and racist rhetoric. In Indiana in the 1920s, D.C. Stephenson became Grand Dragon of the state’s KKK and gained significant political power before being thwarted by a murder and rape conviction. Charles F. Scheible, a member of the group, was elected mayor of Youngstown, Ohio in 1923, with the Klan’s endorsement. Marches and parades were common in cities and small towns, as the KKK worked to embed itself in the social fabric of communities. Although it began to decline in the late 1920s, the region has maintained branches of the Klan ever since. The region has also been a hotbed of anti-government groups, such as the Michigan Militia. During a peak activity in the early 2010s, Michigan was second only to Texas for Patriot Militias, or anti-government groups that engage in military-style training. Today, however, it is the alt-right, rather than the KKK or neo-Nazis, that have gained prominence in the Midwest.

“The Midwest is seeing an increase in activity of the alt-right segment of the white supremacist movement. Patriot Front, Identity Europa, Daily Stormer Book Club — all these groups are very active right now,” Carla Hill, a senior investigative researcher with the Anti-Defamation League, told Mic.

These national groups are active primarily in urban areas like Chicago and don’t have significant membership, but have been making themselves known with posters and flyers, in some cases going into the suburbs to leave anti-immigrant flyers in driveways and hang banners.

“There’s a history connected to the Midwest, and it certainly continues in the alt-right,” Hill added.

This year has also seen a new development among the modern far-right in the Midwest: Using elections to gain political power. In Illinois, Arthur Jones won the Republican primary for an congressional seat; a Holocaust denier and long-time neo-Nazi, Jones had run four other times without success, but will now face incumbent Democrat Dan Lipinski. In Wisconsin, Paul Nehlen is running to replace Paul Ryan in Congress; the avowedly “pro-White” Nehlen is an active member of the alt-right and has made no secret of his white supremacist ties.

Both candidates have been decried by the Republican establishment. The Wisconsin GOP said in a statement emailed to Mic, “While they have no chance of winning, we nonetheless condemn these candidates and their hateful, racist views in the strongest possible terms. There’s no place for them in the Republican Party.”

Illinois GOP chairman Tim Schneider shared similar thoughts on Jones, telling Mic, “The Illinois Republican Party and our country have no place for Nazis like Arthur Jones. We strongly oppose his racist views and his candidacy for any public office, including the 3rd Congressional District.”

“I think the fact that Jones was successful this year tells us a little bit about where the country is at these days,” Beirich said of these candidacies.

But it can also tell us a bit about the place of extremism in the Midwest today, and the role it might play in electing the next president. Although the candidacies of people like Nehlen and Jones aren’t expected to be successful and the DSA has so far fallen flat in the region’s higher profile elections, the political presence of both extremes can’t be denied. The political shifts we’ve seen in the Midwest over the last four years (including the loss of states like Wisconsin and Michigan for the Democrats and their carrying Illinois by only twelve counties in 2016) suggest that centrist Democrats could find lukewarm support for an agenda that doesn’t directly speak to high-profile concerns.

Both the far-left and the far-right can invoke decades of history in the region, and are building on that history to gain new support in an increasingly politically divided age. The Midwest isn’t — and has never been — immune to extremist views or radical politics, and centrists in both parties need to face that reality if they are going to effectively speak to the Heartland.