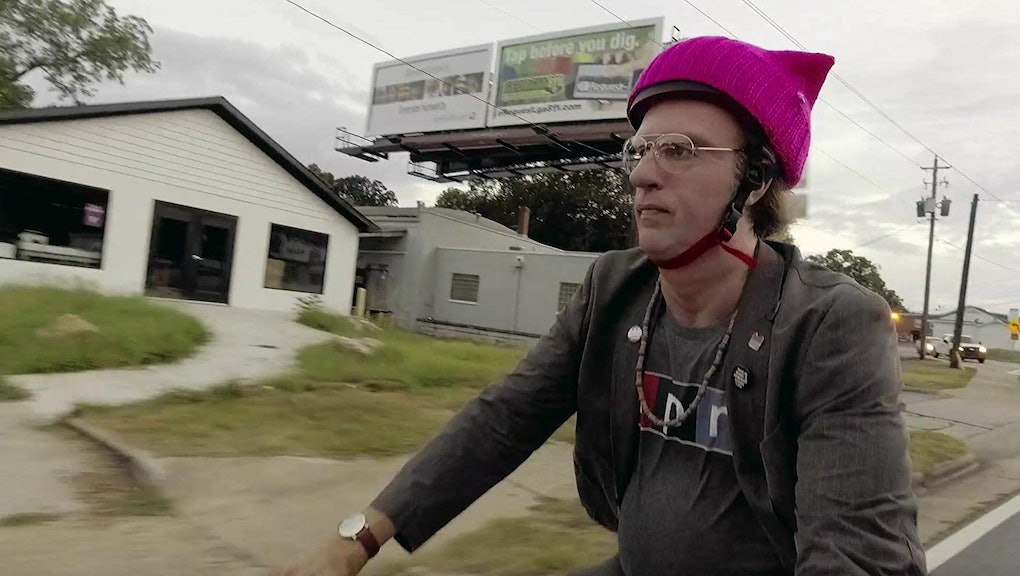 Here’s who got duped in the latest ‘Who Is America?’ — and what they said about it

The third episode of Sacha Baron Cohen’s satirical cringefest Who Is America? aired Sunday on Showtime. In true Cohen fashion, it featured four segments in which Cohen, deep in character, either exposed his interview subjects’ worst impulses or humiliated himself. Or both.

But did any of the people featured in Sunday night’s episode speak out about being duped? You bet they did. Here’s who was featured in the most recent episode of Who Is America? and what they had to say about it.

In the first segment of Sunday’s episode, Cohen appeared as his alter-ego Erran Morad, an ex-Mossad agent brimming with Israeli machismo. (Side note: Has anyone else noticed Morad’s unibrow is getting thicker by the episode?) Morad’s interview subject was failed Senate candidate Roy Moore. The Alabamian was accused of sexual assault by multiple women, including one who said she was just 14 when Moore took her on a date, after which he allegedly “tried to initiate sexual contact” with her, according to the Washington Post.

After bonding over Israel and Alabama’s shared history of equality and freedom for all, Morad decided to show Moore some of Israel’s advanced technology — specifically, a device that detects pedophiles and sexual predators and emits a high-pitched beeping sound when it scans one. But wait, something’s wrong! The dang thing won’t stop beeping whenever it comes close to Moore. He eventually walked out of the interview, telling Cohen, “It’s been nice. I support Israel. I don’t support this kind of stuff.”

Even before Who Is America?’s premiere, Moore revealed he had been duped by the comedian, releasing a statement on a pro-Roy Moore Facebook page.

“I did not know Sacha Cohen or that a Showtime TV series was being planned to embarrass, humiliate and mock not only Israel, but also religious conservatives such as Sarah Palin, Joe Walsh and Dick Cheney,” the statement read in part. “As an Alabamian, I believe in truth and honesty, which the shadowy media groups behind this illicit scheme do not. Obviously, people like Cohen who mock not only Israel but those who support Israel and the principles upon which America is based, do not share my beliefs.”

In the next segment, Cohen appeared as Dr. Nira Cain-N’Degeocello, his parody of a pussy-hat-wearing liberal. Cohen-as-Cain-N’Degeocello brought together Republican Chip Limehouse, a former member of the South Carolina House of Representatives, and Atlanta-based rapper Bone Crusher.

Over the course of the conversation, Limehouse exposed his homophobia by scooting his chair away when Cain-N’Degeocello talked about having sex with a man. Cohen also managed to make both men side-eye him by insisting the word “black” is offensive. A good time was clearly had by all.

On Sunday, Limehouse told the local Post and Courier he didn’t know his interviewer was Cohen at the time, but that he did notice his interviewer’s makeup and apparently knew the questions were deliberately outrageous. He told the paper he believed he was invited to appear on the show because the goal “is to make Republicans and conservatives look bad.”

Crusher, who spent the segment making hilarious facial expressions, doesn’t seem to have commented on his appearance on the show.

Cohen returned as Morad in the following segment, this time meeting with conservatives John, Jack and Joe to teach them how to trap “illegal Mexicans.” Unsurprisingly, all three men quickly offered up racist stereotypes and alarming misconceptions about immigration.

Two of them, John and Jack, willingly went along with Morad’s “plan” to lure undocumented immigrants to a fake quinceañera, where they apparently planned to knock out guests with drugged guacamole? John dresses up in drag — complete with synthetic vagina — as a girl celebrating her quinceañera, while Jack films the whole thing from a piñata.

The Jack from the segment seems to be on Twitter, but doesn’t appear to have tweeted about his appearance on the show. Joe, who suggested “young girls, pussy” as good “bait” for immigrants, and John, who was identified only as a “Trump supporter,” also don’t appear to have commented publicly — or experienced any news-making fallout from their time on Who Is America?.

Everyone at the rap battle

In episode three’s mildest, and therefore most watchable, segment, Cohen came back as Cain-N’Degeocello to participate in a rap battle. Onlookers were mostly confused as Cohen battled rapper Ness Lee with lyrics like, “Please wave your hands in the air if you do care about women’s rights.” But Cohen’s line about having a “larger phallus than you” did earn him wild cheers from the crowd.

Lee seemed to have a pretty good attitude about having been the “straight” man in the segment. On Sunday he tweeted, “I cooked you b!!! @SachaBaronCohen Lol salute ‘Nira.’ Thanks for the opportunity ... and the prank.”