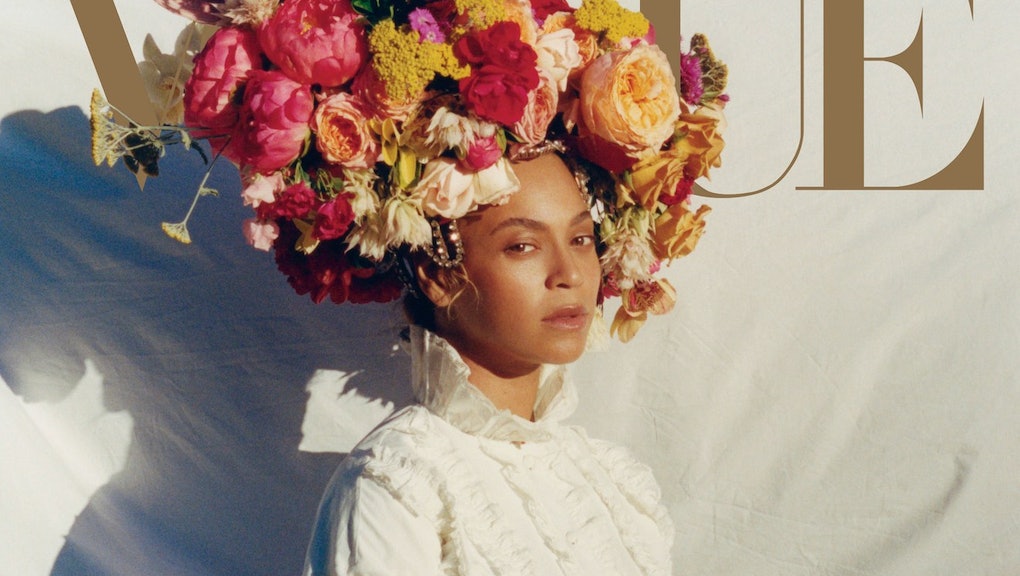 The September issue of Vogue features a first in the magazine’s 126-year history: a cover shot by a black photographer.

Instead of some big-shot artist like Annie Leibovitz, 23-year-old Tyler Mitchell had the honor of photographing Beyoncé for the magazine’s cover. Mitchell is an Atlanta-based artist who got his start shooting music videos, using social media platforms like Instagram to elevate his work — and there’s already something of a debate brewing over who deserves credit for this moment in Vogue history.

In an interview with Vogue published Monday morning, Beyoncé explained why Mitchell was the clear choice to photograph her for the September issue.

“Imagine if someone hadn’t given a chance to the brilliant women who came before me: Josephine Baker, Nina Simone, Eartha Kitt, Aretha Franklin, Tina Turner, Diana Ross, Whitney Houston and the list goes on,” she said. “They opened the doors for me, and I pray that I’m doing all I can to open doors for the next generation of talents.”

Well aware of Vogue’s very white history of cover photographers, Beyoncé used the opportunity to issue a challenge to the Wintours of the world — those who have the power to curate, to empower others and to effect change.

“If people in powerful positions continue to hire and cast only people who look like them, sound like them, come from the same neighborhoods they grew up in, they will never have a greater understanding of experiences different from their own,” Beyoncé said. “They will hire the same models, curate the same art, cast the same actors over and over again, and we will all lose. The beauty of social media is it’s completely democratic. Everyone has a say. Everyone’s voice counts, and everyone has a chance to paint the world from their own perspective.”

Mitchell’s perspective is definitely something of a radical departure for the iconic fashion publication. In an interview with Vogue published Monday, Mitchell said his work aims to counter years of oppression against black people, instead imbuing them with softness and humanity.

“For so long, black people have been considered things,” Mitchell said. “We’ve been thingified physically, sexually, emotionally. With my work I’m looking to revitalize and elevate the black body.”

That mission is certainly evident in Mitchell’s shots of Beyoncé, which were taken in London “amid the faded glamour of a dilapidated English country house,” per Vogue. Not unlike her instantly iconic, flower-adorned pregnancy announcement photo, Mitchell’s depiction of Beyoncé is both soft and raw, gentle and exposed. In one image, she sits straight-backed, with an elaborate crown of flowers atop her head, surrounding her mostly bare face, stripped almost entirely of makeup. In another, she wears a Victorian-style gown — likely very expensive — but sits on a dingy, blue-carpeted staircase with her legs spread wide, staring at the camera confrontationally.

Of course, Mitchell’s age means he was a fan of Beyoncé before he ever could conceive of working for her.

“It’s funny because I’m pretty sure she headlined the first concert I ever went to, when I was maybe eight or nine,” he said, “so you could say we met in a past life.”

In selecting a photographer, Beyoncé’s mission was to open the door for artists like Mitchell — and it looks like he’s already looking to do the same for those looking up to him.

He said, “I want to open the eyes of the kids younger than me, show them that they can do this too.”