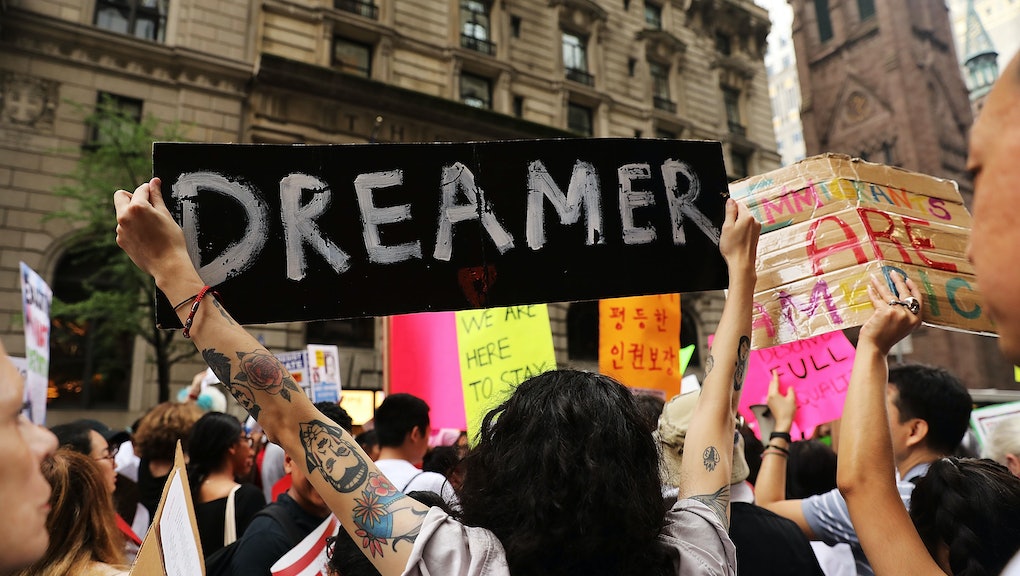 A federal court on Friday ordered the Trump administration to fully reinstate the Deferred Action for Childhood Arrivals program — but an upcoming hearing means the program’s future is still in doubt.

The DACA program, which was first instituted under President Barack Obama, provides undocumented immigrants who were brought to the U.S. as children with temporary legal residence and work authorization.

In response to the April ruling, DHS Secretary Kirstjen Nielsen in June issued a memo defending the government’s decision to repeal DACA. The memo argued that the “DACA policy’s legality is too questionable to warrant continuing the policy,” and cited such reasons to strike down the policy as the potential for “burdensome legislation.”

The court struck down that memo Friday, ruling that it “offers nothing even remotely approaching a considered legal assessment that this court could subject to judicial review.”

Bates, who was appointed by President George W. Bush, emphasized that the court’s ruling does not necessarily mean “that DHS lacks the statutory or constitutional authority to rescind the DACA program” and that it must give a rational explanation for its decision.”

“A conclusory assertion that a prior policy is illegal, accompanied by a hodgepodge of illogical or post hoc policy assertions, simply will not do,” he wrote in his decision.

DACA is set to be reinstated 20 days after the ruling, which the court noted would give the government time to decide whether to appeal the decision. The ruling’s reinstatement of the program differs from past decisions upholding DACA, which simply allowed the program to accept renewal applications. This legal challenge, which was brought by organizations including the National Association for the Advancement of Colored People and Princeton University, will fully restore the program and allow immigrants to submit new applications, in addition to renewals.

New challenges to DACA ahead

With Congress still yet to pass legislation that would give DACA recipients permanent protection, the program’s fate is still in doubt. Though Friday’s ruling is one of several that have upheld DACA, a federal court in Texas will soon hear a new legal challenge that could be the first to strike the Obama-era program down.

A hearing is set to begin Wednesday in a legal challenge brought by seven states that seeks to end DACA. The states will request an injunction ordering the government to stop issuing new work permits to DACA recipients. Preventing the government from issuing new permits, the states noted in their lawsuit, would “effectively phas[e] out the program within two years.”

The lawsuit, which was filed in May by attorneys general in Texas, Alabama, Arkansas, Louisiana, Nebraska, South Carolina and West Virginia, challenges Obama’s 2012 executive order establishing DACA as being unconstitutional. The attorneys general argue that rather than being handled through executive action, the policy should be “debated in and decided by Congress.”

“Our lawsuit is about the rule of law, not the wisdom of any particular immigration policy,” Texas Attorney General Ken Paxton, who filed the lawsuit, said in a statement in May. “Texas has argued for years that the federal executive branch lacks the power to unilaterally grant unlawfully present aliens lawful presence and work authorization. Left intact, DACA sets a dangerous precedent by giving the executive branch sweeping authority to ignore the laws enacted by Congress and change our nation’s immigration laws to suit a president’s own policy preferences.”

The Trump administration has declined to defend the immigration policy in court, agreeing with Texas and the other states that the policy is “unlawful.” Twenty-two DACA recipients, represented by the Mexican American Legal Defense and Educational Fund, have been allowed to intervene in the case, as MALDEF argued the government would not adequately represent their clients’ interests.

Attorneys general in New York, California, Connecticut, Delaware, Hawaii, Illinois, Iowa, Maine, Maryland, Massachusetts, Minnesota, New Mexico, North Carolina, Oregon, Pennsylvania, Rhode Island, Virginia, Vermont, Washington, and the District of Columbia filed an amicus brief against the lawsuit. In the brief, the officials argued that “ending DACA would injure the amici States as employers, providers of health services, and proprietors of public universities,” as well as cause the states “to lose many millions of dollars in tax revenue.”

There’s reason to believe that Texas and other states will succeed in their legal challenge. The lawsuit was filed in the U.S. District Court for the Southern District of Texas, where it will be overseen by Judge Andrew Hanen, who has a history of delivering anti-immigrant rulings. Hanen struck down a similar program to DACA, the Deferred Action for Parents of Americans and Lawful Permanent Residents program, as being illegal in 2015; he noted in his opinion that DACA and DAPA were “instituted in the same fashion.”

Should Hanen rule in favor of Texas and the other states challenging DACA, it could result in an unprecedented crisis of conflicting federal court rulings. In addition to Bates’ Friday ruling and the Texas litigation, appeals court rulings concerning DACA are also pending in district courts in California and New York, as well as the U.S. Court of Appeals for the Fourth Circuit.

“I’m not aware of any legal precedent controlling what happens next,” Washington University School of Law professor Stephen Legomsky, who previously served as chief counsel at U.S. Citizenship and Immigration Services, told USA Today in May. “I know of no prior situation in which there have been conflicting injunctions against the government, with one court ordering the government to do precisely what previous courts have prohibited it from doing.”

Most likely, DACA’s fate will end up in the hands of the U.S. Supreme Court, which will be forced to determine which legal ruling wins out. In a court filing for the Texas lawsuit, the Department of Justice requested that if the court does grant an injunction in favor of the states challenging DACA, it should be delayed for two weeks so the government “can seek stays of all the DACA injunctions in the respective courts of appeals and the Supreme Court.”

The Supreme Court previously declined to rule on DACA in February, rejecting a request from the Trump administration to review the lower court’s rulings striking down the policy’s repeal.