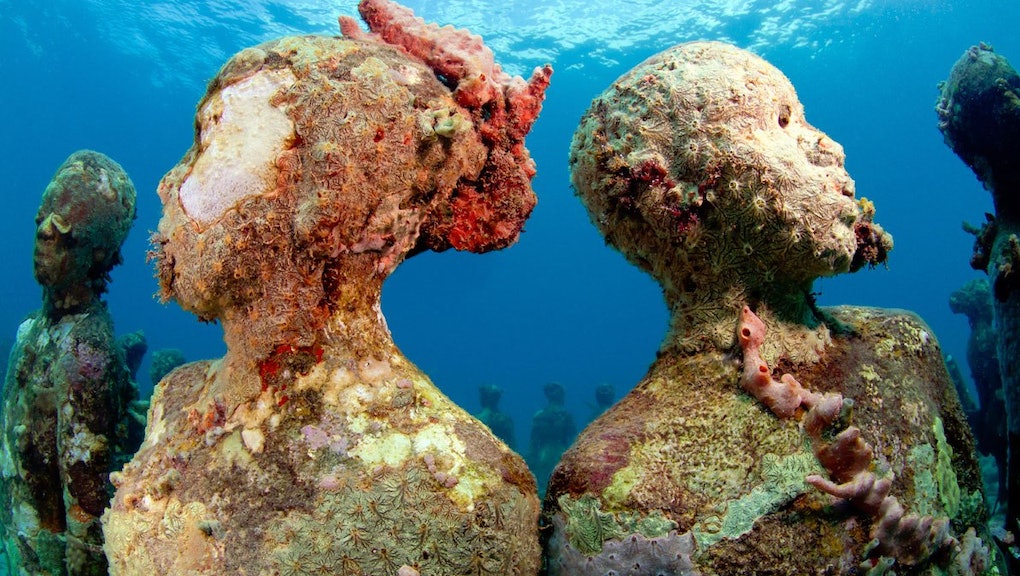 “They don’t market this country well,” a staff member at the Sandals resort in Grenada said as we walked the shoreline of Grand Anse Beach, one of the most paradisiacal places I’ve ever set foot on. She might have a point, since every person whom I told I was going to Grenada assumed I meant Granada, the city in southern Spain.

Those who do know the Caribbean country that is Grenada often know it as the host of one pretty impressive underwater sculpture park. As far as tourist attractions go, this one’s definitely not for everyone: You’ll have to go scuba diving to see the full scope of the museum beneath the water’s surface. Photos of Vicissitudes, one life-size sculpture of children holding hands in a circle, keep popping up on my social media feeds, looking both depreciated and etherial, and prompted me to wonder: Why does this majestic underwater world exist? (Mic traveled to Grenada on a trip hosted by Sandals Resorts.)

Grenada’s underwater sculpture park in Molinere Bay was the world’s first. Although the art looks ancient, the park was first built in 2006 by underwater photographer, sculptor and environmentalist Jason deCaires Taylor. Taylor’s statues are constructed from concrete and steel — some weighing up to 15 tons — and are bolted to the bottom of the ocean. The 75 sculptures attract scuba divers, snorkelers and even glass-bottom boaters, since several of the sculptures are just 6 feet below the surface.

Although these figures are designed to delight visitors lucky enough to see them up close — much of the country’s economy relies on tourism — the park has a symbiotic relationship with the ocean and the creatures that live there.

“We use materials and designs that help encourage life,” Taylor said in a 2015 TED Talk. “A long-lasting pH-neutral cement provides a stable and permanent platform; it is textured to allow coral polyps to attach. We position them down current from natural reefs so that after spawning, there [are] areas for them to settle. The formations are all configured so that they aggregate fish on a really large scale.”

Even more, the art becomes enhanced by the life that thrives around it. Colorful sponges and algae layer upon the once-blank statues; marine life feeds off the growing plants. The light changes that occur underwater make the experience feel near-psychedelic. Photos hardly do the colors you can see underwater justice. Taylor describes it in his TED Talk best:

“Sponges look like veins across the faces. Staghorn coral morphs the form. Fireworms scrawl white lines as they feed. Tunicates explode from the faces. Sea urchins crawl across the bodies feeding at night. Coralline algae applies a kind of purple paint. The deepest red I’ve ever seen in my life lives underwater. Gorgonian fans oscillate with the waves. Purple sponges breathe water like air. And grey angelfish glide silently overhead.”

For the artist, there’s a deeper connection between ocean and art.

“The pieces won’t disintegrate,” Taylor said in a separate TED interview. “If anything, they will build up with more layers of calcium and growth. They will be transformed into something else. I am making these inert objects, but the environment is giving them their souls.”

Ultimately, Grenada’s ocean sculpture park — and the many more Taylor has created since, like Museo Atlantico off the coast of Lanzarote, Spain — is meant to remind people the ocean is a space we need to take care of. The mysterious quality of the ocean and the fact most of it goes unseen is partly why humans have neglected its health, Taylor said.

“If someone was to throw an egg at the Sistine Chapel, we’d all go crazy,” he said in his TED Talk. “If someone wanted to build a seven-star hotel at the bottom of the Grand Canyon, then we would laugh them out of Arizona. Yet every day we dredge, pollute and overfish our oceans. And I think it’s easier for us to do that because when we see the ocean, we don’t see the havoc we’re wreaking.”

Adding attractions beneath the water, then, gives people something to treasure and to value. Grenada’s sculpture park is now a designated National Marine Park that aids conservation efforts, as entrance fees fund park officials to properly manage fishing quotas and tourism, Taylor said in his TED Talk. So yes, Grenada’s biggest attraction is hidden down below — but this only adds to the fun. Who doesn’t want to explore a secret destination that’s continuously changing?