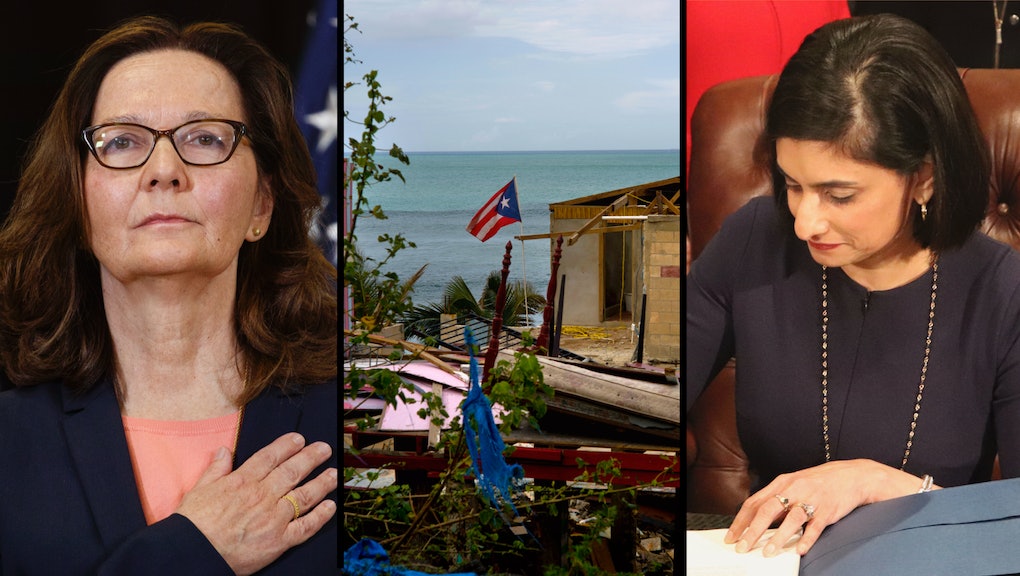 While You Weren’t Looking: 5 stories from the Trump administration that aren’t about Space Force

As the Trump administration prepared to blast off with Space Force — the enterprising new plan to create a sixth military branch focused exclusively on preserving U.S. military dominance among the stars — scandals brewed in other, more terrestrial-bound corners of the government.

Grab your telescopes: Here are five important stories you might have missed this week.

Puerto Rican officials raised the death toll from Hurricane Maria from 64 to 1,427

The Puerto Rican government acknowledged in a report that the official death toll from September’s ruinous Hurricane Maria likely exceeds 1,400, a number far higher than the initial estimate of 64.

The report, titled, “Transformation and Innovation in the Wake of Devastation,” was quietly published by the Puerto Rican government back in July, and only picked up traction this week after journalists from the New York Times noticed and reported on the numbers on Thursday. The report also requests $139 billion in recovery funds from Congress.

In the immediate aftermath of Hurricane Maria’s devastation, journalists and researchers quickly speculated the death toll was much more than what elected officials admitted. In December, Vox spoke to two social science researchers on the island who, after analyzing Puerto Rico Vital Statistics System data for the months of September and October, estimated the death toll could be as high as 1,085, largely thanks to widespread power outages and downed medical infrastructure.

When asked about the updated death toll — nearly 20 times higher than what was originally reported — officials continued to hedge their own numbers, saying the government was awaiting a final report from George Washington University researchers.

“We definitely acknowledge this is a realistic estimate,” Pedro Cerame, spokesman for the Puerto Rican government’s Federal Affairs Administration, told the Times. “We don’t want to say it out loud or publicize it as an official number. The official number will come, and it could be close.”

The EPA loosened regulations around asbestos use

The Environmental Protection Agency was forced to issue a clarification on a rule change that would loosen regulations around the use of asbestos — a once-common compound found in insulation and fireproofing materials that has since been exposed as a dangerous carcinogen.

Under the significant new use rule, the controversial substance could theoretically come into more widespread use in manufacturing.

News of the revised approach to regulation was directly followed by a New York Times report that published a trove of internal EPA emails revealing a significant number of scientists and officials within the agency aren’t too keen on the rule change.

An explosive report from ProPublica on Tuesday revealed a trifecta of non-governmental actors has been quietly pulling the strings within the Department of Veterans Affairs, even going so far as to counsel eventual department head David Shulkin on the agency’s inner machinations.

The trio is composed of Bruce Moskowitz, a Palm Beach-based doctor to the wealthy; Marvel Entertainment chairman Ike Perlmutter; and a lawyer named Marc Sherman.

Collectively, the men are known as “the Mar-a-Lago crowd” within VA circles and currently enjoy what the report describes as “sweeping influence” within the agency.

Notably, the troika reportedly took it upon themselves to personally meet with Shulkin after his 2017 nomination as VA secretary and later proceeded to act “like board members pounding a CEO to turn around a struggling company,” as one former administration official characterized it.

The cables, which were declassified at the behest of the private research institute the National Security Archive, describe the events surrounding the interrogation of terror suspect Abd al-Rahim al-Nashiri. The documents list waterboarding, forced nudity, shackling and mock executions among the techniques used by agents in their attempts to glean information.

At one point, the cable notes interrogators “covered [Nashiri’s] head with the hood and left him on the water board, moaning, shaking and asking God to help him repeatedly.” Nashiri insisted he had no information on potential future terror attacks against the United States.

Haspel, the first woman to head the CIA, was rigorously questioned about her history of overseeing such interrogation tactics during her Senate confirmation hearing in May. Although she did not directly acknowledge her role in the interrogation program, she eventually conceded it was “not one the CIA should have undertaken” and said in a statement she would rely on her “moral compass” to guide her in the future.

The Trump administration on Friday announced its latest move to hack away at the Affordable Care Act, this time by hobbling a program designed to minimize Medicare costs by enabling doctors and hospitals to more efficiently coordinate patients’ care.

The move will put a strain on what are known collectively as Accountable Care Organizations — groups of care providers that are incentivized under the ACA to work together to provide patients better care at a lower price point than the regular Medicare program, according to the Washington Post, awarding them bonuses from the government if they are able to successfully do so.

While the ACOs formerly had up to six years to take part in the program without assuming responsibility for potential losses, the policy shift whittles that time down to two years, raising questions about how the rule change will impact the number of care providers that choose to participate.