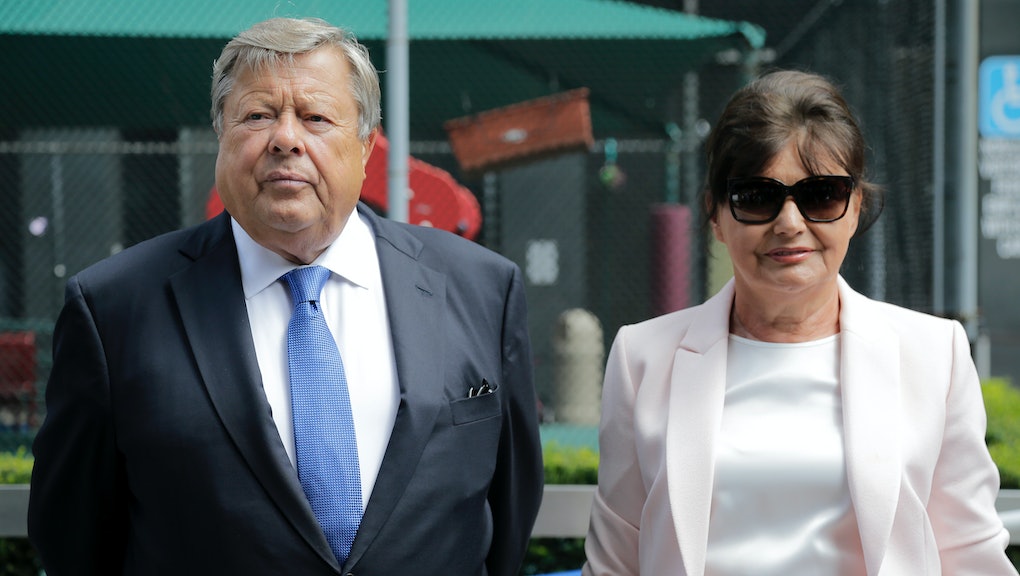 • It’s a true summer Friday in Washington, D.C. Trump is still on vacation at his golf club in Bedminster, New Jersey. There are no public events on his schedule.

Viktor and Amalija Knavs took their oath of citizenship at a private ceremony in Manhattan. Their citizenship was made possible by their daughter, who was able to sponsor them for their green cards, which later made them eligible for citizenship.

A lawyer for the first lady’s parents confirmed to the New York Times that his clients did benefit from “chain migration” but called that term a “dirtier” way to describe the family reunification policy that’s been in place for decades.

Of course, “chain migration” is the term the president has chosen to use when he railed against the policy that his in-laws have now benefited from.

“We need a 21st century MERIT-BASED immigration system,” Trump tweeted in February. “Chain migration and the visa lottery are outdated programs that hurt our economic and national security.”

“We need to keep America safe, including moving away from a random chain migration and lottery system, to one that is merit-based,” Trump tweeted in January.

“Congress must end chain migration so that we can have a system that is SECURITY BASED!” Trump tweeted in November 2017. “We need to make AMERICA SAFE!”

“CHAIN MIGRATION must end now!” Trump tweeted again in November 2017. “Some people come in, and they bring their whole family with them, who can be truly evil. NOT ACCEPTABLE!”

The White House did not respond to comment from the Times about whether Trump supports his wife being allowed to utilize what he calls “chain migration” to allow her parents to become citizens.

Today in Trump’s America: Prosecution could rest its case in Manafort trial

Prosecutors are nearing the end of their case against former Trump campaign chairman Paul Manafort and could rest as early as Friday, according to the Washington Post.

Over the past eight days of the trial, prosecutors have laid out a long paper trail — corroborated by multiple witnesses — which they say shows Manafort engaged in rampant tax evasion and later bank fraud, when the millions he earned through political consulting work for pro-Russian officials in Ukraine dried up.

After prosecutors objected to one of Ellis’ many dressdowns, Ellis apologized Thursday, admitting he was wrong to berate the prosecutors in front of the jury.

Some experts say Ellis’ behavior is unlikely to change the outcome of the trial.

“There has been too much focus on the judge’s behavior, which is unfortunate but won’t impact the outcome of the case, and not enough focus on his style of judging,” former federal prosecutor Renato Mariotti tweeted. “He has been a strong judge that has kept control of the courtroom. That is huge for the prosecution.”

“The judge also wants to wrap this up, because he knows there is more than enough evidence already, and it is in everyone’s interest (including prosecutors) to keep this concise,” Mariotti added. “Many good judges do this. I call them ‘move along’ judges.”

After the prosecution wraps, Manafort’s defense team will make its case. Manafort’s lawyers have already cross-examined Manafort’s former associate Rick Gates, who pleaded guilty to one count of conspiracy against the United States and lying to federal agents. He also testified against Manafort in the trial.

Contempt: A federal judge on Thursday threatened to hold a number of high-level Trump administration officials — including Attorney General Jeff Sessions and Secretary of Homeland Security Kirstjen Nielsen — in contempt of court. This would be, the judge said, if they did not swiftly comply with his order to return a mother and daughter who had been deported before their asylum case had been heard by a judge.

“In the event that the Defendants do not fully comply with this Order, … [they] shall be ordered to appear in Court to show cause why they should not be held in contempt,” Judge Emmet G. Sullivan, a federal judge in Washington, D.C., wrote.