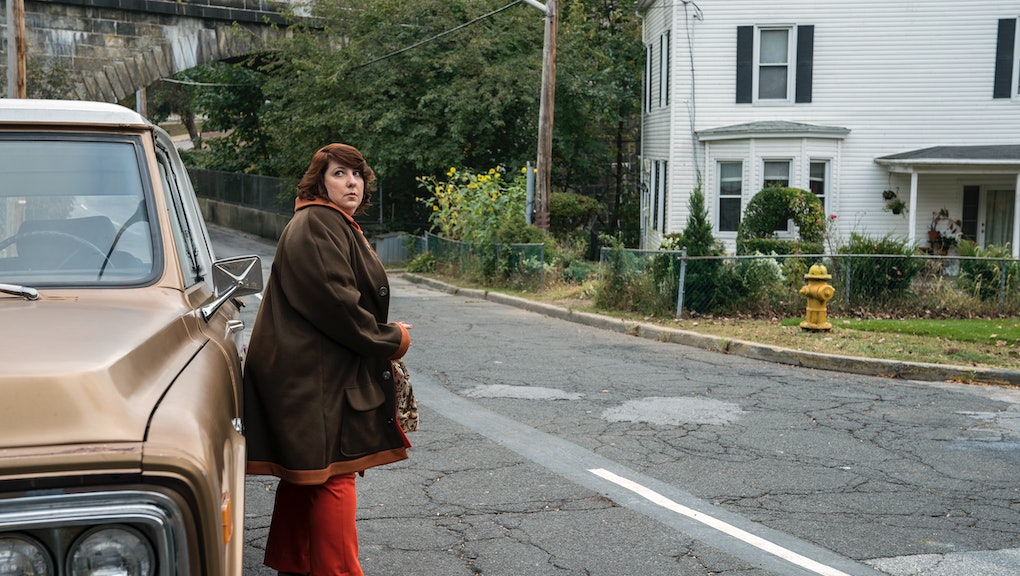 Connie is the villain in ‘BlacKkKlansman.’ But Ashlie Atkinson is ready for white people to wake up.

(Editor’s note: Spoilers for BlacKkKlansman ahead.)

Connie Kendrickson, portrayed brilliantly and almost-too-familiarly by Ashlie Atkinson, is a shockingly toxic villain in BlacKkKlansman. She first appears in the film at a Klan meeting in her home, where she serves up refreshments to her husband and his KKK friends. It’s clear that she’s a doting wife and wants to be actively involved in the KKK’s activities, despite being abruptly pushed aside so that the men can talk about business without her. Connie wants to be seen as an equally racist partner in her marriage and is willing and ready to do anything to help her husband kill black people.

BlacKkKlansman, which hit theaters Friday, is based on the true story of Ron Stallworth, a black police officer who infiltrated a KKK chapter in Colorado Springs, Colorado, in the 1970s. Ultimately, Connie becomes a key player in one of the most vile, most racist, most violent acts in the film: accusing Stallworth of rape as he tries to arrest her for plotting to kill local black activists.

Centering white women in a story about racism and white supremacy is as timely as ever. The Justice Department recently reopened the murder investigation of Emmett Till, a 14-year-old who was kidnapped and brutally killed after allegedly grabbing and making crude comments to a white woman in Mississippi. (In 2017, Carolyn Bryant Donham said her allegations were false.) Week after week, there are viral internet stories about white women calling the police on black people doing everyday activities like selling water or meeting up at Starbucks. Trump was elected to office in part because 53% of white women voted for him. In a recent interview with Mic, Atkinson makes it plain that white women have long been complicit and active in racism.

“I think white women have always held themselves safely above the fray in their minds,” she said. “You can’t look the other way and continue to benefit from a white supremacist system, in this nation that was built on the backs of black people and other people of color.”

Atkinson talked to Mic ahead of the film’s release to chat about the three words that convinced her to audition for the role of Connie, why white women have to stop calling the cops on black people and the moment she became galvanized for racial justice. This interview has been edited and condensed for clarity.

Mic: A lot of people are going to hate your character. What were your initial reactions when you read the script?

Ashlie Atkinson: Usually when I get an audition, it’ll tell me who the director is, who I’m seeing, what the project is. [The audition scenes] are when I’m interrupting my husband’s Klan meeting and then when we’re in bed together. I read them, and I immediately fired back at my agents like, “You have known me for 14 years. I don’t know why you thought this was appropriate. I am not going in for some white supremacist bullshit.” They wrote me back a three-word email that just said, “It’s Spike Lee.” Then I wrote back confirming the appointment. I trust Spike implicitly.

I thought it was a movie about the Klan, but it’s not about the Klan; it’s about a detective who seeks to a disrupt a hate group — and him battling with his own issues around race and identity and working within the system. I don’t want to say it’s a Klan movie, that just gives too much authority to the Klan.

I talked to a friend of mine who is Persian, and I told them I was excited, and he said everyone’s going to hate you. I asked him, “How often do you go out to play terrorists?” And he said, “Oh, well, like once a week.” If we’re talking about and portraying domestic terrorism in the United States, it should look like me. It should have my lack of melanin. Like, that’s the only responsible thing to do. I immediately wanted to do it. I thought it was a really awesome and important thing to be trusted with.

You’re speaking to a point I wanted to address, which is playing this character and thinking about how white women have historically been complicit and active in racism.

AA: And left off the hook for their complicity and their activity in racism. There’s a moment toward the end of the film where you think I’ve done the worst thing I’m gonna do, and then I do an even worse thing, and I just kept thinking about Emmett Till. The idea of white purity is something that’s used as a weapon. I think people think that excuses white women because they don’t even have to be present for other people to use that as a weapon against black people or any person of color. But that doesn’t mean that we’re not also complicit in maintaining this status quo of a white supremacist system because it is comfortable and safe for us or perceived as safe and comfortable for us.

And it’s not just history. The final montage is scenes from the violence in Charlottesville, and other moments in the film make it current. Why do you think it’s important to tie the past and present together?

AA: I just feel like we get so tied up in the wrong part of tradition and heritage. It’s falsehoods. We’re taught so much crap that’s not true — like that Columbus discovered America. That’s where white fragility comes in, right? Because white people get really tired when they realize that they have to pull at these strings and everything is going to unravel and there’s not a neat and tidy solution — that their identities and their assumed superiority is a fiction that has been maintained over hundreds and hundreds of years. And they want to go, “Yeah, I’m an ally, let me do this.” But it’s a constant battle.

What do you hope BlacKkKlansman inspires people — in particular, white women — to do?

AA: There’s a lot of things that I hope, honestly. I hope that when white women come out of the film that they search for what they recognize in themselves and in Connie. I want them to examine themselves, and I want them to examine their complicity in the current administration and the way that these white supremacist systems are being maintained currently. I want them to think about things like calling the cops. That’s something that I keep coming back to, is white women calling the police on people of color for barbecuing, for selling water, for being at a Starbucks. I don’t know if they understand that they are putting these people in imminent and real danger. And I’m not sure if they don’t care or whether they want that or if they literally just don’t understand that their experience with the police is not everyone’s experience with the police. But a white woman’s inconvenience can be a very dangerous thing.

I saw you tweeted about the premiere and you added the #BlackLivesMatter hashtag. What was the moment that really sparked your allyship?

AA: Trayvon Martin was really a huge wake-up call for me. It’s not like this was a new phenomenon; I just became aware of the constant excessive use of force on unarmed black men and women and trans people of color. I’m grateful to social media for that. Then, it continued with Tamir Rice, Michael Brown and Eric Garner. And I became ashamed that I hadn’t been aware before — but then I became galvanized. I was really struck at the premiere when there’s that scene when [John David Washington] walks up to the targets where the guys are shooting at caricatures of black people. I immediately flashed back to finding out someone was selling targets of a young black man in a hoodie, holding an Arizona iced tea, right after the death of Trayvon Martin. I just think of the horror of shit like that.

Was there anything that you did for self-care after playing this character?

AA: Oh my gosh, yeah. I have a friend who is a DJ where he was doing these great soul nights. It starts out like in ‘60s, ‘70s soul, and dancing really helped. I also threw a Halloween party in the midst of the whole thing because I just like was like, “I need to see my friends. I need to sit with my friends,” and I just made time for folks. I did a lot of reading. I am embarrassed to say that I had not read The New Jim Crow. It had been sitting on my shelf forever. That was not really in my self-care regimen; that was more like atonement. It was a great book and everybody should read it.