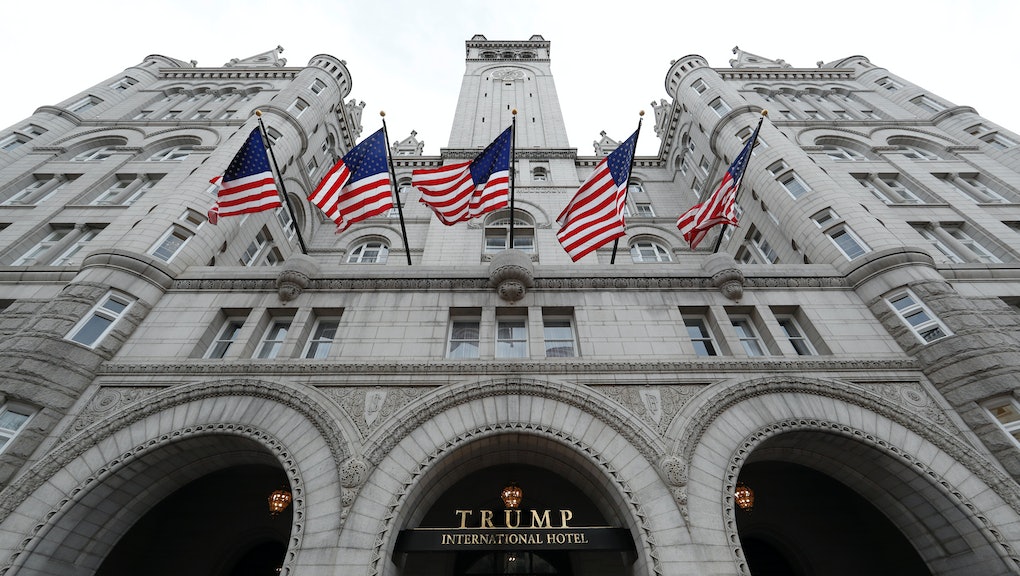 A new pair of legal actions has shown how, roughly 19 months into Donald Trump’s presidency, the financial ties between the Trump Organization and the administration remain shrouded in secrecy.

Judge Quentin L. Kopp, a former California state senator, filed suit against the U.S. Secret Service in federal court Tuesday, alleging the agency has refused to turn over details of the costs incurred when the Secret Service accompanied Donald Trump Jr. on a business trip to India in February.

The lawsuit describes how Kopp in February filed a Freedom of Information Act request for financial information about the trip. The Secret Service allegedly denied the request in May, saying it was “too broad in scope,” and reportedly failed to respond when Kopp followed up with a more specific request. The lawsuit further criticizes how Trump Jr. is accompanied by agents on overseas business trips on the taxpayers’ dime, noting adult children of the president are allowed to decline Secret Service coverage.

“Donald Trump Jr.’s use of taxpayer-funded Secret Service for his personal security during private business trips abroad gives the appearance of an intertwining of the presidency of the United States and the Trump Organization,” the lawsuit states. “The Trump Organization can and should be paying for security services for its executives. Taxpayers should not.”

Trump Jr., an executive vice president at the Trump Organization, had already drawn criticism over possible conflicts of interest during his India trip. Indian newspapers ran advertisements offering homeowners “a conversation and dinner” with Trump Jr. in exchange for a $38,000 booking fee, Vox reported at the time.

“Trump’s company is literally selling access to the president’s son overseas,” Jordan Libowitz, communications director for Citizens for Responsibility and Ethics in Washington, told the Washington Post. “For many people wanting to impact American policy in the region, the cost of a condo is a small price to pay to lobby one of the people closest to the president, far away from watchful eyes.”

Trump Jr. was initially scheduled to deliver during his trip a speech on Indo-Pacific relations, which was criticized for blurring the lines between his roles as a government surrogate and private citizen. The speech was later rebranded as a “fireside chat” about his experience as the president’s son and India’s business culture, according to Kopp’s lawsuit.

As Kopp sues for information about the finances behind the Trump Organization — of which Trump remains principal owner — a separate court ruling has shown congressional Democrats how difficult obtaining that information can be.

A federal judge on Tuesday dismissed a lawsuit filed in November 2017 by Democrats on the House Oversight Committee. The suit sought to obtain information from the General Services Administration on the Trump International Hotel in Washington, D.C. Democrats requested records on the hotel’s revenues and expenses; correspondence between the GSA, the Trump Organization and the Trump transition team; and actions the GSA was taking to address conflicts of interest between the Trump Organization and the Trump administration.

The Trump Organization has been leasing the Old Post Office Building, which is owned by the federal government, since 2013. Though the lease agreement stipulates that no “elected official of the government of the United States ... shall be admitted to any share or part of this lease or to any benefit that may arise therefrom,” no members of the president’s family — including Trump himself — appear to have divested their interests in the hotel.

The GSA in March 2017 ruled the Trump Organization to be in compliance with the lease.

Democrats sued the GSA for information under the “Seven Member Rule,” which requires executive agencies to “submit any information requested of it relating to any matter within the jurisdiction of the committee” so long as at least seven members of the House Oversight Committee make the request. Just prior to Trump’s inauguration — when former President Barack Obama was still in office — the GSA reportedly “produced records that were responsive to plaintiffs’ initial requests.” However, lawmakers have been unable to procure additional information since Trump assumed the presidency, the lawsuit states.

U.S. District Judge Ahmet Mehta, who was appointed by Obama, said in his ruling that plaintiffs in the suit, which includes Rep. Elijah Cummings (D-Md.), had other “political tools” at their disposal to get the information. The judge recommended such tools as persuading a majority of their Oversight Committee colleagues to help them issue a subpoena for the documents or bringing litigation through the House Bipartisan Legal Advisory Group.

“The fact that a political remedy is hard to achieve does not automatically swing open the doors to the federal courts,” Mehta wrote.

The Wall Street Journal noted that while “Seven Member Rule” challenges have prevailed in the past, members of Congress have a “high bar” for bringing lawsuits. The Supreme Court has maintained lawmakers must show a “concrete and particularized injury” in such requests and must have a “personal stake” in its outcome.

“We are considering our legal options at this point, but if this ruling stands, it will be up to the American people to decide whether they believe Republicans are doing a good job overseeing President Trump or whether Democrats will conduct more credible oversight of this Administration going forward,” Cummings, the ranking Democrat on the Oversight Committee and the suit’s lead plaintiff, told the Journal.

Trump’s D.C. hotel has drawn widespread criticism over its potential financial entanglements with the presidency. An NBC News analysis published Aug. 8 found that foreign governments and federal agencies alike have spent considerable sums at the hotel, including $56,000 in taxpayer funds. The potential corruption isn’t limited to D.C., either: The Washington Post reported Aug. 3 the Trump International Hotel in New York City received an influx of revenue in the first three months of 2018 from the Crown Prince of Saudi Arabia’s trip to New York, though it is unclear whether the stay was funded by the Saudi Arabian government.

Critics have contended Trump’s profiting off the presidency could be a violation of the emoluments clause, which prohibits federal office holders from receiving gifts from foreign governments and keeps the president from profiting from office beyond his regular salary.

Although Tuesday’s ruling ensures the finances behind Trump’s D.C. hotel remain hidden for now, another court challenge could bring them to light. After one emoluments lawsuit was dismissed in December, a federal judge ruled in July that a separate lawsuit accusing Trump of violating the emoluments clause through foreign payments to his D.C. hotel can move forward. Trump’s lawyers initially sought to dismiss the lawsuit, which was filed by attorneys general in Maryland and Washington, D.C.