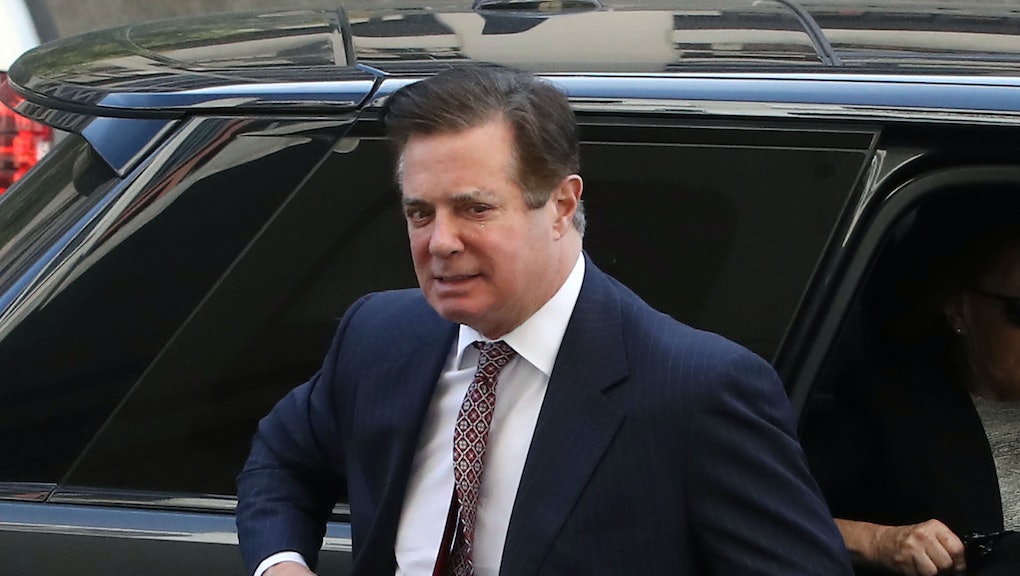 Today in Trump’s America: Manafort jury’s questions to the judge may be a good sign for his defense

• Trump is spending his day fundraising in the Hamptons, a tiny vacation community in the far reaches of Long Island, New York.

Trump announced Friday morning that he canceled a planned military parade in Washington, D.C., which slated to take place on Veterans Day.

The announcement came the day after the Department of Defense increased the estimated cost for the event from $12 million to $92 million.

Trump, however, blamed the local D.C. government for the cancellation.

“The local politicians who run Washington, D.C. (poorly) know a windfall when they see it,” Trump tweeted. “When asked to give us a price for holding a great celebratory military parade, they wanted a number so ridiculously high that I cancelled it. Never let someone hold you up!”

The president’s parade has been panned for its high cost, as well as the optics — military parades are often used as a show of force by dictatorial regimes.

The jury in former Trump campaign chairman Paul Manafort’s trial will return on Friday for a second day of deliberations.

The jury deliberated all day Thursday as it worked to reach a verdict on the numerous charges of bank fraud and tax evasion that Manafort is charged with.

Before leaving for the day, the jury sent four questions to Judge T.S. Ellis, including asking him to redefine “reasonable doubt.” In a trial, the jury has to decide whether prosecutors proved “beyond a reasonable doubt” that a defendant committed the crimes they are charged with.

Ellis responded by telling the jury that prosecutors had to prove that Manafort committed the crimes he’s charged with not “beyond possible doubt,” but on “doubt based on reason,” CNN reported.

Given the large number and complexity of the charges, it’s not unusual for the jury to take more than a day to deliberate. But the “reasonable doubt” question could be a good sign for Manafort.

“I agree that the ‘reasonable doubt’ question is not a good one for prosecutors,” former federal prosecutor Renato Mariotti tweeted Thursday evening. “It suggests some jurors are trying to convince a holdout. The result is occasionally a ‘compromise verdict,’ where the defendant is found guilty on some but not all charges.”

The Senate on Thursday unanimously passed a resolution that says “the press is not the enemy of the people” — a direct rebuke of Trump’s anti-press rhetoric.

“The Senate ... reaffirms the vital and indispensable role that the free press serves to inform the electorate, uncover the truth, act as a check on the inherent power of the government, further national discourse and debate and otherwise advance the most basic and cherished democratic norms and freedoms of the United States,” the resolution reads.

The resolution goes on to say the Senate “condemns the attacks on the institution of the free press and views efforts to systematically undermine the credibility of the press as an attack on the democratic institutions of the United States.”

The Senate passed the resolution on the same day that hundreds of newspapers across the country published editorials rebuking Trump’s attacks on the press.

Trump, however, continued his media attacks on Thursday, tweeting the “FAKE NEWS MEDIA IS THE OPPOSITION PARTY” and bizarrely accusing the media of “collusion” for its coordinated editorials — which your newsletter writer cannot make sense of because it truly makes no sense.

Retired Navy Adm. William H. McRaven, the commander of the military operation in Pakistan that killed al-Qaida leader Osama bin Laden, wrote an op-ed in the Washington Post condemning Trump’s decision and standing up for Brennan.

“Few Americans have done more to protect this country than John,” McRaven wrote. “He is a man of unparalleled integrity, whose honesty and character have never been in question, except by those who don’t know him. Therefore, I would consider it an honor if you would revoke my security clearance as well, so I can add my name to the list of men and women who have spoken up against your presidency.”

“We have never before seen the approval or removal of security clearances used as a political tool, as was done in this case,” the officials — who served under both Democratic and Republican presidents — wrote.