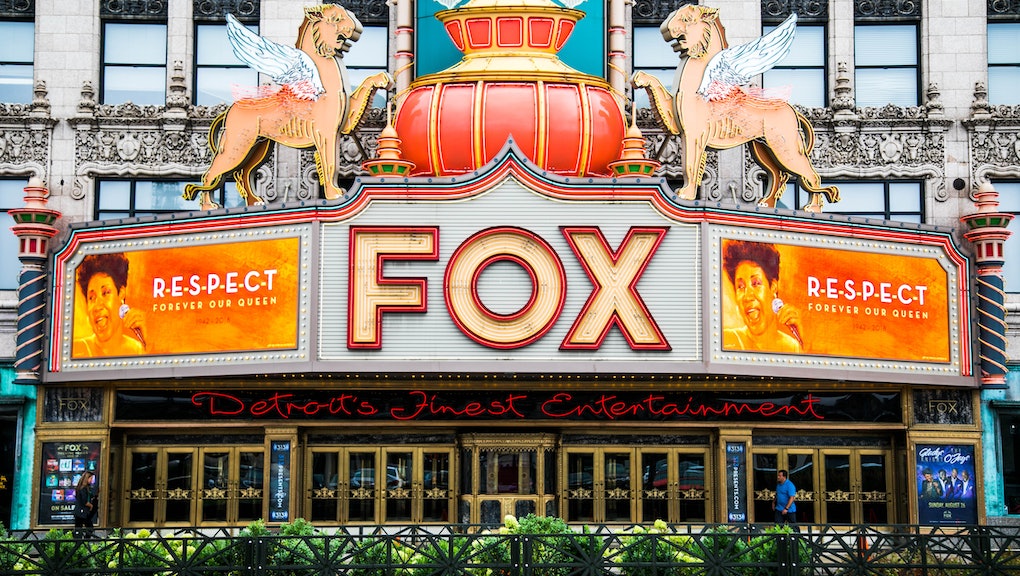 Aretha Franklin memorials: How the city of Detroit is paying respects to the Queen of Soul

Aretha Franklin loved Detroit and Detroit loves her. After her death Thursday morning, various sites throughout the city quickly became makeshift memorials to honor the Queen of Soul.

Detroit photographer Cyrus Tetteh captured the scene and spirit of her legacy across the Motor City.

All four Detroit professional sports teams also paid tribute to Franklin, who had performed the national anthem for most of the teams.

Little Caesars Arena, home of the NHL’s Red Wings and the NBA’s Pistons, posted a marquee outside its building. Franklin sang “America the Beautiful” in the Pistons’ previous home, the Pontiac Silverdome, for WrestleMania III in 1987.

Motown Museum announced it would play Franklin’s music throughout the weekend. Though she didn’t record music for Motown Records, “There is no question she was part of the Motown family,” the museum said in a statement.

“Aretha was an international music icon and unmatched talent who deserved every bit as her status as the Queen of Soul. Her legacy will continue to inspire and resonate in the souls of Detroiters and her fans around the world.”

Franklin’s longtime friend, Rev. Jesse Jackson, visited her Wednesday at her home, where they “had prayer twice. I was able to touch the warm of her hands and kiss her forehead one more time,” Jackson told the Detroit Free Press.

The Detroit Free Press described the scene inside the church as somber but celebratory.

As a little girl, Franklin performed at New Bethel, which her father, Rev. C.L. Franklin, led for decades, including at the height of the civil rights movement. Her legacy is rooted not only in her music, but also how she used her voice for change.

Inside the church, the Detroit Free Press described the gallery filled with photos of Franklin and other figures, including Martin Luther King Jr., Coretta Scott King and former Detroit Mayor Coleman Young. The gallery included the album cover for Franklin’s 1972 album, Amazing Grace.

Franklin was honored with a street named after her, Aretha Franklin Way, in June 2017. A portion of the road in Franklin’s namesake is the site of the Music Hall Center for the Performing Arts, where she had her final Detroit performance.

“I knew I would get weepy when I got down here,” Franklin said at the time, the Detroit News reported. “Every time I come down here, I want to see it. I’m gonna dance down it. Thank you.”

Music Hall Center for the Performing Arts is the site of Franklin’s final performance in her hometown. The concert was part of the inaugural Detroit Music Weekend, with Franklin at the forefront. It included the naming of Aretha Franklin Way.

“Music Hall is mourning the loss of Aretha Franklin,” Music Hall president and artistic director Vince Paul said in a statement. “The relationship with Aretha began in the early ‘60s when she attended the Easter sermons at Music Hall ... She performed countless concerts, parties and appearances over the years.”

In Detroit, Kid Rock posted a personal message outside his restaurant. He also recounted the time Franklin banned him from swearing onstage in a 2001 performance in New York City with her and her son, Teddy.

“The producer that day came up to me before rehearsals and said Aretha told him, ‘I like Kid Rock, but I am not gonna be up on this stage with him if he is gonna use those curse words, I am a woman of the church!’” Kid Rock told the Detroit News.