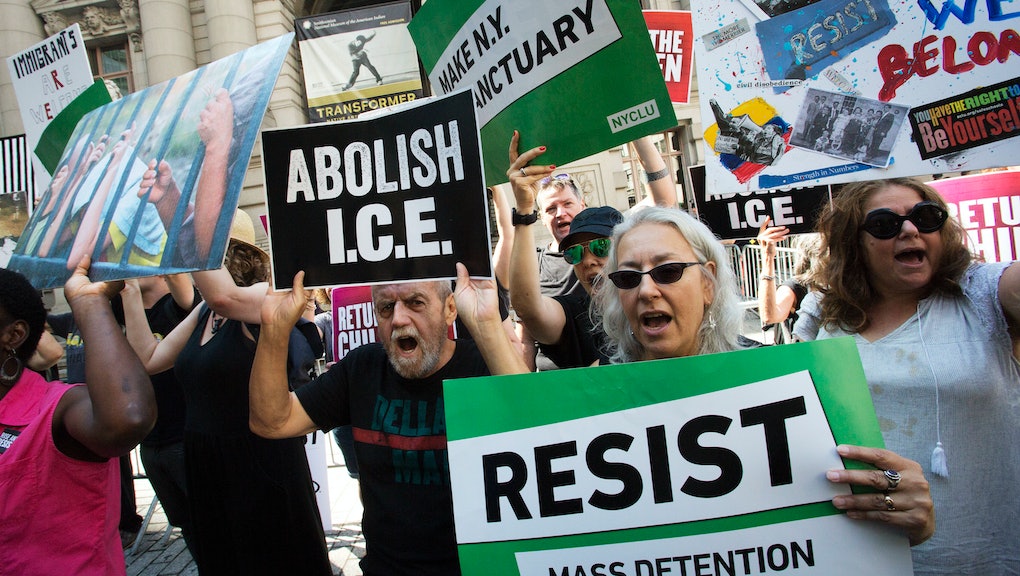 Coming up this week in politics: Trump honors ICE with ceremony as John Bolton talks to Russia

Though the U.S. House of Representatives remains on recess, the political world won’t be slowing down this week.

With the November midterms fast approaching, voters in two Republican-majority states will head to the polls this week, while President Donald Trump rallies his supporters in West Virginia.

The president will also draw attention to his own controversial immigration policies this week with a special celebration — and his former campaign manager Paul Manafort’s legal fate could be decided. Elsewhere in the executive branch, national security adviser John Bolton will head abroad for talks with Russia as first lady Melania Trump stays close to home and makes headway on her cyberbullying initiative.

Here’s what to expect from the week ahead.

Trump’s agenda: Trump will head to Charleston, West Virginia, for a rally Tuesday in support of the state’s Republican candidates in the November midterms as well as to award the Medal of Honor to U.S. Air Force Technical Sergeant John A. Chapman Wednesday.

Most controversially, Trump will honor the country’s immigration enforcement officials Monday with a “Salute to the Heroes of the Immigration and Customs Enforcement and Customs [and] Border Protection.” Trump’s deployment of immigration enforcement and overt campaign against undocumented immigrants has drawn criticism throughout his presidency — including a growing movement to abolish ICE — and the ceremony is taking place amid the ongoing family separation crisis that arose from the administration’s zero tolerance immigration policy. As of Thursday, 565 children remain in custody and separated from their parents, according to government data cited by NBC News.

Melania combats cyberbullying: First lady Melania Trump will continue her Be Best initiative this week at the Federal Partners in Bullying Prevention Cyberbullying Prevention Summit in Maryland. Mrs. Trump will participate in a panel discussion and deliver remarks “addressing the positive and negative effects of social media on youth,” the Associated Press reported.

The first lady’s cyberbullying initiative — which took awhile to get started in the first place — has been disparaged amid her husband’s own use of Twitter to bully his critics. Some of those complaints potentially came from President Trump himself, who reportedly urged the first lady to choose a different topic to champion in order to avoid further criticism, the New York Times reported Friday.

John Bolton: White House national security adviser John Bolton will head to Switzerland this week to meet with his counterpart in the Russian government. The meeting is a follow-up to Trump’s widely criticized meeting with Russian President Vladimir Putin, and White House press secretary Sarah Huckabee Sanders said the two will discuss a “range of important national security issues,” the Hill reported.

In addition to his trip to Switzerland, Bolton will travel to Israel and Ukraine to meet with those countries’ officials.

Manafort trial: The jury deliberations in the trial of former Trump campaign manager Paul Manafort will continue this week, after jurors left Friday evening without agreeing on a verdict. Jurors began their deliberations on Manafort’s alleged bank fraud and tax evasion Thursday; the first day of deliberations ended with jurors asking a series of questions to Judge T.S. Ellis, including a clarification on “reasonable doubt” that could be good news for Manafort’s defense.

Congress: The Senate will be in session this week while the House remains on its August recess. Coming up on the Senate’s agenda is the consideration of the Department of Defense Appropriations Act for 2019 along with hearings on U.S.-Russia relations and the Secure Elections Act, which addresses election cybersecurity in the wake of Russia’s election meddling.

After initially resisting meeting with him, Democrats in the Senate will also continue meeting with U.S. Supreme Court nominee Brett Kavanaugh as his confirmation hearing nears. Missouri Senator Claire McCaskill will meet with Kavanaugh Tuesday, following Sens. Joe Manchin, Heidi Heitkamp and Joe Donnelly to become the latest red state Democrat — and potential swing vote — to meet with the nominee.

Senate Minority Leader Chuck Schumer is also slated to meet with Kavanaugh Tuesday, though he’s not likely to be swayed to vote for the nominee; rather, Schumer said he will question Kavanaugh about the extensive documents from his time in the George W. Bush White House. The release of Kavanaugh’s records, which Democrats argue could shed more light on the judge’s views, has become a major source of contention ahead of Kavanaugh’s confirmation; it is unlikely all his documents will be released by the judge’s early September Senate hearing as Democrats demand.

Primary elections: Voters in Wyoming and Alaska will head to the polls for primary elections Tuesday, and the U.S. territory of Guam will vote Saturday. Wyoming and Alaska’s elections will include U.S. House of Representatives and gubernatorial races, as Alaska Gov. Bill Walker, an independent, faces both Republican and Democrat challengers, and current Wyoming Rep. Liz Cheney — daughter of former Vice President Dick Cheney — fights for reelection.

Wyoming U.S. Senator John Barrasso is facing a primary challenge from a field of Republican candidates, which includes businessman David Dodson, who invested $1 million of his own money into the campaign. Trump has endorsed Barrasso on Twitter, calling him “absolutely outstanding in every way.”